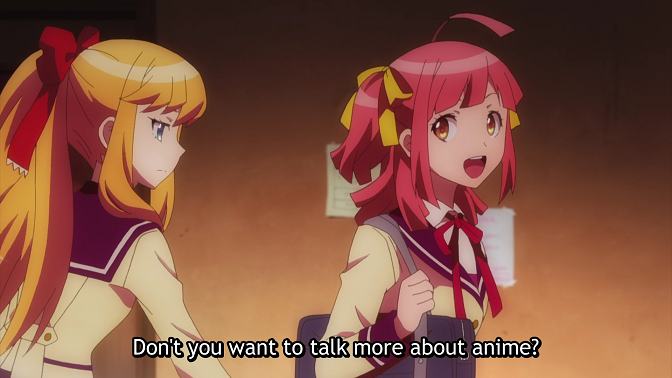 Another season of premieres watched and reviewed! Now that we’ve gone through every new show, it’s time to get ’em all in one room and see how they measure.

We don’t review shows that are sequels, shorts, or for young children. Anything not licensed and immediately available is off the table as well (lookin’ at you, Children of the Whales and Robomasters). This left 24 eligible premieres in nine days.

AniFem staffers Vrai and Dee wrote the majority of the premiere reviews this season, with some much-appreciated help on the busiest days from Caitlin. We don’t always like or dislike the same shows, or to the same extent, but we respect and support one another’s positions and critiques.

Once we have more funding, we aim to set up our own version of ANN’s Preview Guide, to give our readers a range of explicitly feminist views for each premiere. We’re a long way off that funding goal, but it’s been a personal wish of ours since launch and we hope to make it happen someday.

This varies by writer to some extent (some of us are more focused on visuals, others on narrative, and so forth), but as a feminist site it’s of course essential that we raise any issues of feminist interest. When you read an AniFem review, you’re likely to learn about female character designs, queer representation, analogies to real-world marginalization, and so on. If you think we missed something, please comment under the review and let us know!

Rankings out, categories in!

We’re doing things a little differently this season: Instead of ranking the shows in numerical order, we’re just going to group them into categories (“feminist themes,” “harmless fun,” “yellow flags,” and so on). Shows within those categories will be marked with bullet points instead of numbers and listed in alphabetical order.

We opted to change the format for a couple reasons. One, because the numbers felt overly simplistic, more like a checklist than a nuanced exploration. Second, because at a certain point the rankings became meaningless. We were pitting shows that tackled different feminist-relevant issues against each other, as if one had to be “better” than the other instead of just “valuable in a different way,” and it was no fun. As with our season and year-end recommendations, we want the good stuff to exist side-by-side, rather than on arbitrary ladder rungs.

It’s our hope that this new format will more effectively achieve our goal: giving you, our readers, enough information so you can decide for yourselves whether or not to watch a show. There’s greater access to anime than ever before, and we want to help you find anime you can truly love, without wasting your time on a show which contains an automatic deal-breaker, be that fanservice, homophobia, the sexualization of children, and so on.

Individuals can find value in the unlikeliest of places, and we will never lead a boycott of a particular show, but we want to make it easier for you to get the most out of your limited time. In our digest, feminist merit takes precedence, with overall narrative quality coming second and personal preference a distant(ish) third. Shows containing feminist themes are at the highest end and those containing anti-feminist themes are at the lowest. We expect some disagreement and welcome debate, so if you have any objections to our lists then by all means let us know in the comments!

Anime was a mistake

Dee and Vrai wrote this together! Yay teamwork! When they’re not working for AniFem or finally sleeping after nine days of endless reviews, Dee (@joseinextdoor) writes about anime and manga at The Josei Next Door and Vrai (@writervrai) writes about anime, American cartoons, and quality trash vampire fiction at Fashionable Tinfoil Accessories.