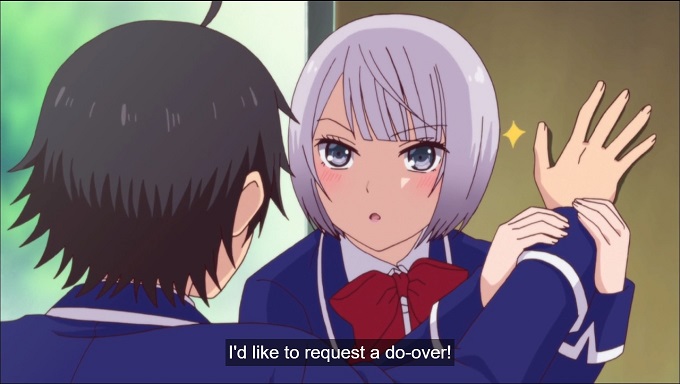 With nothing left to lose, ordinary high school student Haruka Shinozaki confesses to beautiful, diligent class representative Akiho Kōsaka and to his surprise she accepts. Kōsaka takes dating as seriously as she does everything else, but does not quite get it. She pragmatically suggests activities that are too sexual.

Well, I’m mad. Not for the reasons I was expecting, though (well, not just for those reasons).

My Girlfriend is a Shobitch—one of the most godawful titles in recent memory, especially when the more playful and less overtly misogynistic My Girlfriend is Too Much to Handle has been floated as an alternative—is an ecchi anime. It contains all the things that ecchi usually does: panty shots, absurdly sized breasts, and excuses for its female characters to get sticky white fluids around their mouths or chow on something phallic.

What I didn’t expect was for it to come so close to working.

Beneath that misogynistic title and what I’ll blanket term “anime bullshit” (more on that in a minute), there is a shockingly workable idea in this premise. Kosaka is a really likable heroine, and her approach to sex is both uncommonly depicted and relatable (I certainly remember trying to frame sex as academically as possible as a high school honors student because I was terrified of it).

Unlike the usual sort of “innocently oversexualized” characters, who are usually aliens or monsters the show can play off as “not knowing the customs,” Kosaka is just exceptionally smart and trying to approach her inexperience in relationships the way she’d approach not knowing a subject in school. And while she’s overly forward, she never crosses the line into trying to molest or force Haruka—who is, in turn, genuinely interested in Kosaka as a person and wants to take their relationship slowly. He’s even a nice guy rather than a Nice Guy.

I found myself really liking their relationship on the whole, despite some hiccups. For one, there’s a gross bit of inner monologue where Haruka comments on Kosaka being “docile.” The episode finale where he reassures her that what matters is she’s doing her best also comes off somewhat patronizing, since there’s never any equivocal sense that he also needs to do his best to be a good partner to her.

But they’re sweet, and there was a lot of potential for a frank sex comedy exploring a bunch of interesting ideas: that sex drive isn’t tied to gender, that expecting women to be chaste and men to be hypersexual hurts everyone, that every relationship should decide on their own how quickly to progress, and maybe even that Kosaka should be able to enjoy sex for herself and not just because she thinks it’s necessary to keep a boyfriend. Some of the jokes are even funny.

She’s the worst. I think I hate her more than anybody this season except the aspiring sister-fucker. She’s a walking source of sexual harassment to both Kosaka and Haruka, and refuses to take “stop” for an answer (Haruka initially has a bit of harem protagonist syndrome, but later is pretty firm about the fact that he’s uncomfortable with her advances).

There is no sign of this character going away. Even worse, Haruka has a little sister who couldn’t scream “IMOUTO FETISH” any louder if she walked around with a giant sign saying, “I’M A NONTHREATENING FETISH DESIGNED TO APPEAL TO MEN WHO WANT DEPENDENT, SUBSERVIENT SEX SLAVES AND ARE AFRAID OF REAL WOMEN.”

Even if neither of those cancerous lesions on the plot existed, there would still be the matter of the ecchi genre. While I found Kosaka’s character lovable, I was constantly made uncomfortable by how often the camera leers at her butt, boobs, and panties (with selective X-ray vision when it’s being exceptionally gross).

Kosaka’s blunt curiosity about sex isn’t a problem, but the camera turning her into an object of consumption is. With the framing as it is, her personal journey doesn’t matter except in the context of how it allows the camera to put her in new and ever more exploitative poses.

There’s a good idea in here, well-formed enough for me to mourn it. But whatever promise exists in this premiere is sure to evaporate under a parade of excruciating fetish-serving side characters, objectifying storyboards, and phallic symbols. Save yourself the heartbreak.