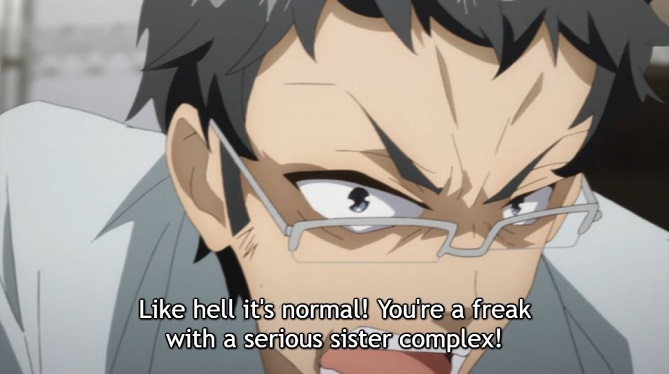 Itsuki is a novelist and “modern day Pygmalion” who works day in and day out to create the ultimate younger sister. He’s surrounded by various other characters: a beautiful genius writer who loves him, his big-sisterly classmate from college, a fellow male writer, a sadistic tax accountant, and his editor. They’re all looked after by Itsuki’s perfect younger step-brother, Chihiro, who has a serious secret.

Hey? Hey, y’know little sister (imouto) fetish anime? The ones about dudes (who have never had a sister) who wish they could make sweet, statutory rape to a young girl who’s dependent on them, never questions them, and provides for their every want? This is one of those.

By the laws of common decency, I’m guessing you know it’s not good, and that you’re actually here to watch me suffer. And you know what? I’m down for that. I’m here for you.

Oh, and perhaps this is obvious, but CONTENT WARNING for incest and pedophilia going forward.

So this is the opening scene.

It’s all a fantasy sequence, but that doesn’t matter. You’re still going to lose ten years off your life while you sit through that minute and a half of animation.

Did you know people worked on this? Like, like really hard, probably. Colorists and in-betweeners and key animators who’re trying to get a foothold in the anime world, who all have big dreams maybe of making real, meaningful art. They lovingly crafted the scene of this dude eating his little sister’s used panties and drinking her breast milk.

Y’know, that opening scene as imagined by a 20-year-old—a 20-year-old with a publishing contract who’s still wasting his time on completely unethical fetish porn—might actually be deep. It is truly the epitome of the sister complex, using every part of the younger sibling. He washes in her used water, wipes his face on her clothes, and eats of her body. She wears no clothes, keeping nothing of value to herself. She is the Giving Tree of sex toys, personifying the expectation of complete reliance and devotion by the fetish object, even up to discarding her own personhood.

I’m guessing the reason the protagonist’s actual younger (step! it’s totally okay! the Westermarck Effect isn’t real!) sibling is presenting as male is out of sheer fear for personal safety. Spoilers, I guess. We can be honest with one another, can’t we?

The majority of the fetish material is actually frontloaded into that repugnant minute-and-a-half, while the rest of the episode involves a scintillating dinner party between Itsuki and his fellow writers. They’re all under 25 with multiple print publications and they whine about how hard it is to be full-time authors. I hate them. This also proves to be an opportunity for the show to tell us what women who aren’t little sisters are like! What’s even the point, right?

(Seriously, what is the point? You know the APA did a study on the damaging psychological effects of sexualizing young girls more than ten years ago? Oreimo hadn’t even poisoned the well yet.)

Anyway, they play a long word game that’s primarily an excuse to save on animation. They blew most of their time and money on the inter-dimensional panties, you see.

One of the girls, Miyako, is a non-entity. The other one, Nayuta, speaks only in sexual come-ons, and Itsuki is completely uninterested in her, because who wants a sexually consenting woman who can make her own decisions? Am I right, fellas? Also, they all look twelve, because even when the show includes adult women it wants to infantalize them.

Then again, Nayuta is also randomly homophobic to the only other man in the room, so maybe the aspiring sister-fucker has a point.

After Nayuta gets sent home, we’re shown a flashback about how Itsuki read her first book all in one sitting and cried or something. Perhaps he was crying tears of knowledge: the knowledge that one day he would face the truly relatable dude problem of having an attractive, nubile 18-year-old constantly throwing herself at his creepy, unsocialized, objectifying self.

Then the episode ends. A euphoria like none I have ever felt floods my body. This is how Evel Knievel saw the world. This is what it means to live.

P.S. Nominally calling the protagonist a freak/pervert doesn’t matter if you play out his sexually suggestive fetishes with the aim of arousing a very specific audience. Your series still reads like an aspirational guidebook for incestuous rapists, and it sucks.