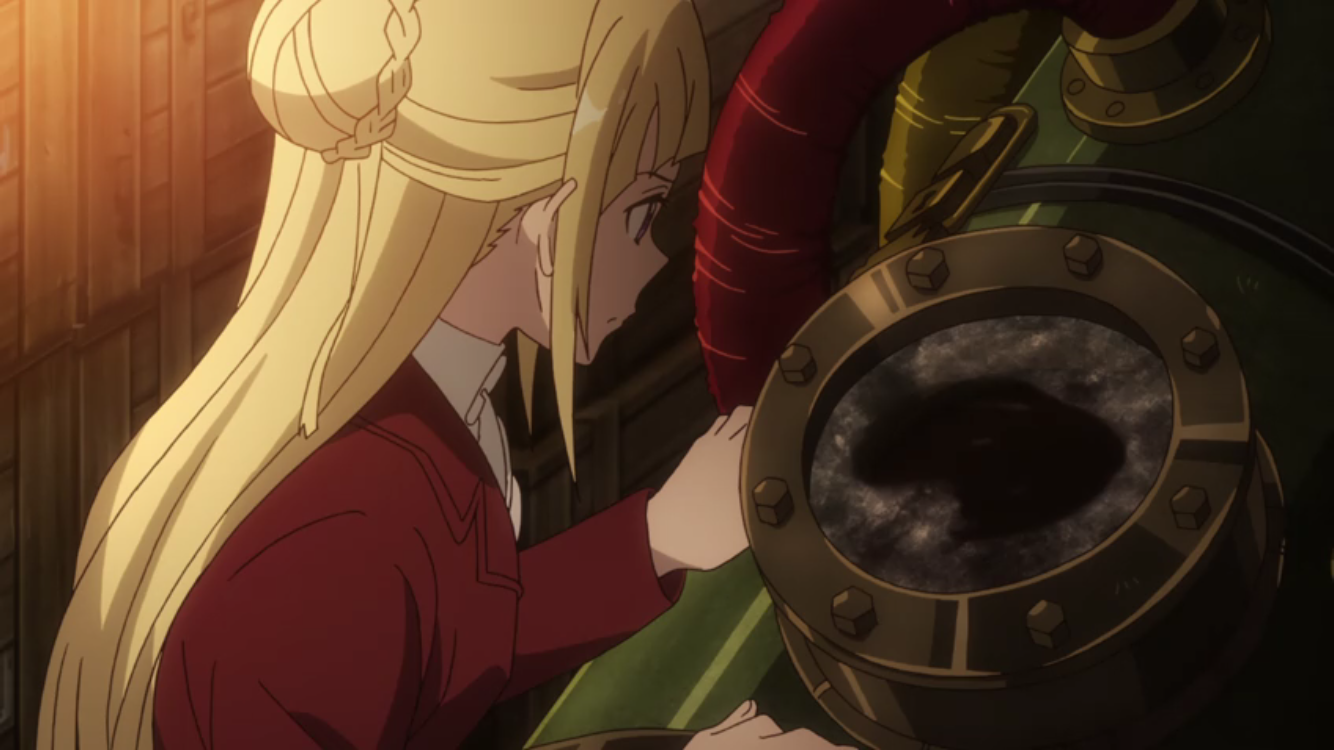 Princess Finé is travelling covertly from her country Eylstadt to Britannia, to negotiate with the Allies for military support before her country is invaded by Germania (in a conflict that is definitely not World War II). The journey is dangerous, and while evading capture she comes across a capsule, strapped shut, with what looks like a girl inside.

Izetta was the first anime of the season to get a really strong response from me, and that response was frustration. The aesthetic and atmosphere resonate with me on a Studio Ghibli level, particularly Howl’s Moving Castle and Laputa: Castle in the Sky, a.k.a. the film that introduced me to anime in the 1980s. I love that film, and I wanted so badly to love everything about Izetta too. But I can’t. Because fanservice.

Let’s start with the good. The basic foundation for a well-written character are a personal goal, the agency to work towards it and plausible motivation for their actions. Leading her own mission to gain help for her country as her father is incapacitated, Finé has all three. She’s apparently a beautiful tomboy with impeccable etiquette and political ability, not exactly relatable but definitely an interesting character introduction. When we see her interact with a more powerful woman she retains her composure while the more powerful woman is obviously emotionally vulnerable. It’s an interesting dynamic even before you factor in just how queer-leaning the show is.

The shower shots, about 10 minutes in, knocked me out of all immersion. I spent the rest of the episode taking screenshots and figuring out how to express my irritation in 140 characters. There are just three lingering shots, two of her body and one of her face. If they wanted to show her emotional state, the one of her face would have been sufficient. If they wanted to showcase the scars on her side, there were ways to do that which didn’t involve naked sideboob from a voyeuristic POV. At the end of that sequence Finé stands in a towel while the camera hovers until the moment she drops towel and reveals her butt, then cutting away. There is no reason for this.

The show either doesn’t trust its viewers to be sophisticated enough to maintain interest in their material, or it doesn’t trust the material to be good enough to captivate discerning viewers. Both points are incorrect. The episode had me engaged and enthusiastic for a solid 10 minutes before they deliberately ended my immersive viewing experience. Thanks to that, I was in full-on snark mode for that shot of a girl in a tiny hospital gown type thing astride a very long gun.

Okay, look, she’s a witch. (Spoilers for anyone who didn’t read the title, I guess.) When we first meet her she is levitating on a branch, so this is pretty much the same, right? With two key differences: when she rides the branch she is a) fully dressed, b) sitting side-saddle and c) a child. Apparently growing up means fewer clothes and more phallic imagery.

I probably shouldn’t blame them though, they obviously wanted to cram in whatever “manly” items they could to offset all the queer coding of the final scenes and closing credits. There will be more than a few people who overlook the sprinkling of penis-targeted fanservice in the premiere for the sake of the promised intimacy between the girls in future episodes. As a reviewer I will continue watching, but as a viewer they probably would have lost me 10 minutes into episode one.