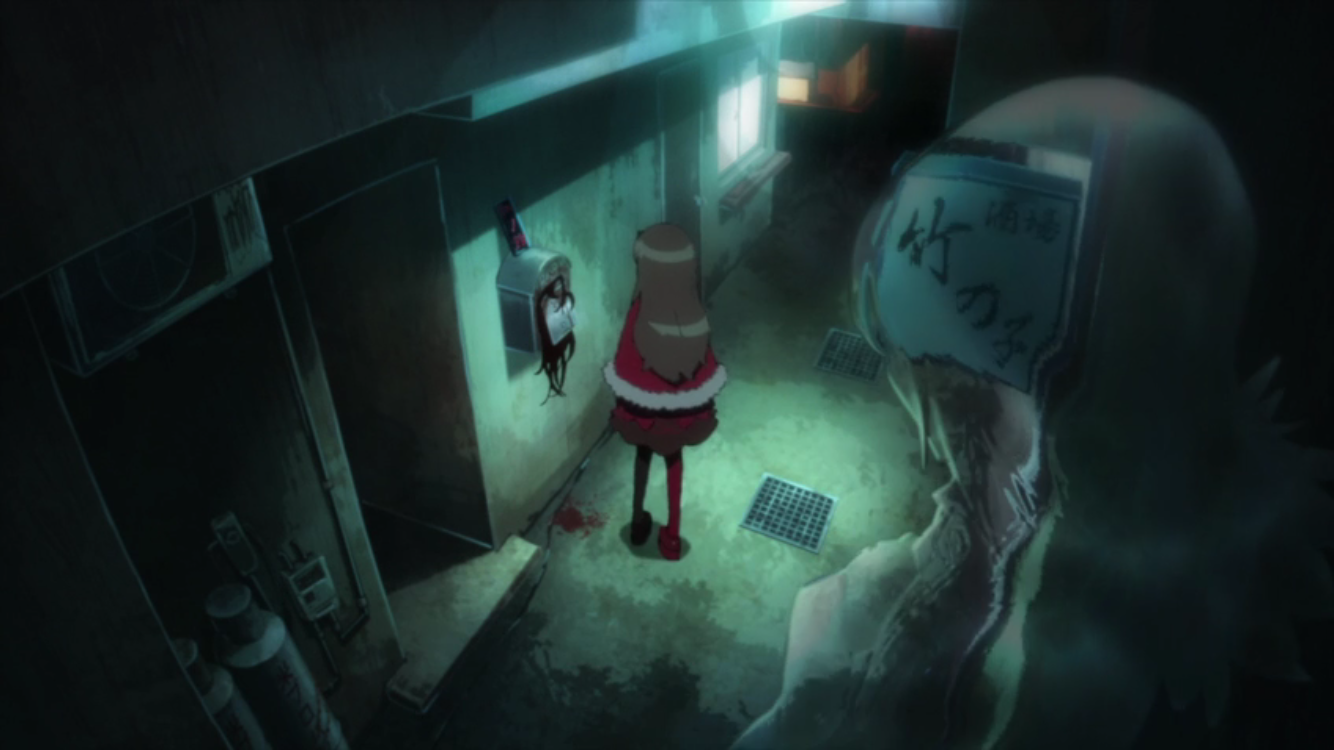 Teenager Yuta runs a snarky occult news blog. Black magic consultant Kurenaino runs a shop trading in curses. Publisher Sumikaze wonders if her boss saw a ghost when he went to collect a handwritten manuscript from one of their authors. Nine very different people’s paths begin to draw together, all linked by a single murder and the occult.

Let’s start with things I liked, because that will be a much shorter list and I don’t think this anime deserves a review with a positive conclusion. I’ve seen a lot of complaints about the pacing, but that didn’t bother me at all; if you’ve got a complicated story and need to cover a lot of ground to get to the point, there are worse ways to get there than rapid fire cuts and snippets of dialogue dropping hints about the story to come back to in the future. With nine people to introduce, their scenes were generally short and diverse, which kept it interesting, and the pace actually made slower moments of horror and humour far more effective – and the horror in particular was very effective.

Now for things I hated. Not just disliked; hated.

Do I start with Ryoka, the character who is both sexualised with an anatomically unfeasible rack for her tiny frame AND infantilised? Scorching Ping Pong Girls may have literally named their well-endowed teenage character Boobyboob, but at least they also made the point that she was stocky, i.e. her entire body was a little bigger in order to support and justify her larger breasts. She acts like a whimsical child, introduces herself to Yuta by letting him fall face first into her breasts (because of course) then winking and telling him she is her minion. As a breast-bearing feminist, she is painful to watch on every level.

How about Izumi, the most offensive gay stereotype I’ve seen in quite some time? 12 named characters this episode and the one gay man (that we’re aware of) is camp, wearing pink clothes and make-up with feminine hair and talking in typical ‘okama’ language. If you’re going to make a character like that to explore queerness and binaries in Japanese society or treat as a full and nuanced character to ensure they are given respect, great! Izumi is pretty clearly included just as a joke to laugh at though, making an unwelcome addition to the pretty poor roster of gay/non-binary representation in anime overall.

Those aren’t even the worst characters. Hands down the worst character is Yuta himself, which is a pretty bad start for a protagonist. Rock bottom was when he reminisces on a rainy rooftop about his first meeting with Ryoka’s breasts: “They were truly melons! She has melons in there! Ripe, so ripe it’s too sweet! The only regret is that the tops aren’t designed with breast contours in mind! Every middle and high school in Japan should make it mandatory for girls’ uniform tops to all curve according to their breasts!” Ryoka is right there through all of this, by the way, dancing around with an umbrella for no apparent reason then shooting him with a laser gun for his comments.

I’ll remind you that Occultic;Nine has NINE MAJOR CHARACTERS TO INTRODUCE IN 24 MINUTES, yet it spends valuable seconds on this pointless, creepy rubbish. Also gross: when he is so pleased to get his idol, Miyuu on his staff that he instantly dumps the entirety of his workload on her and Ryoka (who thankfully isn’t having it). Also gross: when he introduces himself as “It’s true that I’m an otaku and a virgin, but I’m not creepy! If I dress normally, I’d say my looks are slightly better than average in my class.” This is in voiceover, not in response to anything. They just chose to include this “I’ve not had sex but I am totally sexable, honest” description for no reason at all. Unless they are aiming for peak dislikeable in 20 minutes, in which case, mission accomplished.

There’s a lot of background ickiness too, from the female TV personality on the talent show who interrupts a heated debate to say cutesily that she doesn’t really understand but wants to talk about another panellist’s hair instead, to Miyuu saying she accepts Yuta is a “trashy NEET” (he’s not, they literally just met in school) but asking to be with him anyway. There seem to be some potentially decent female characters, but there is a veneer of misogyny over the entire show that makes me unwilling to watch their development. You might as well cover a bar of chocolate in mucus; the packaging seems fine and there may well be the greatest bar of chocolate ever preserved inside, but I’m not touching it.

The horror parts of this anime could work, but it’s so badly outweighed by the horrendous representations of women and gay men that it’s impossible to stomach. I’m dropping this one instantly, and it would take some pretty spectacular reviews of the complete series to convince me that it’s worth coming back to.