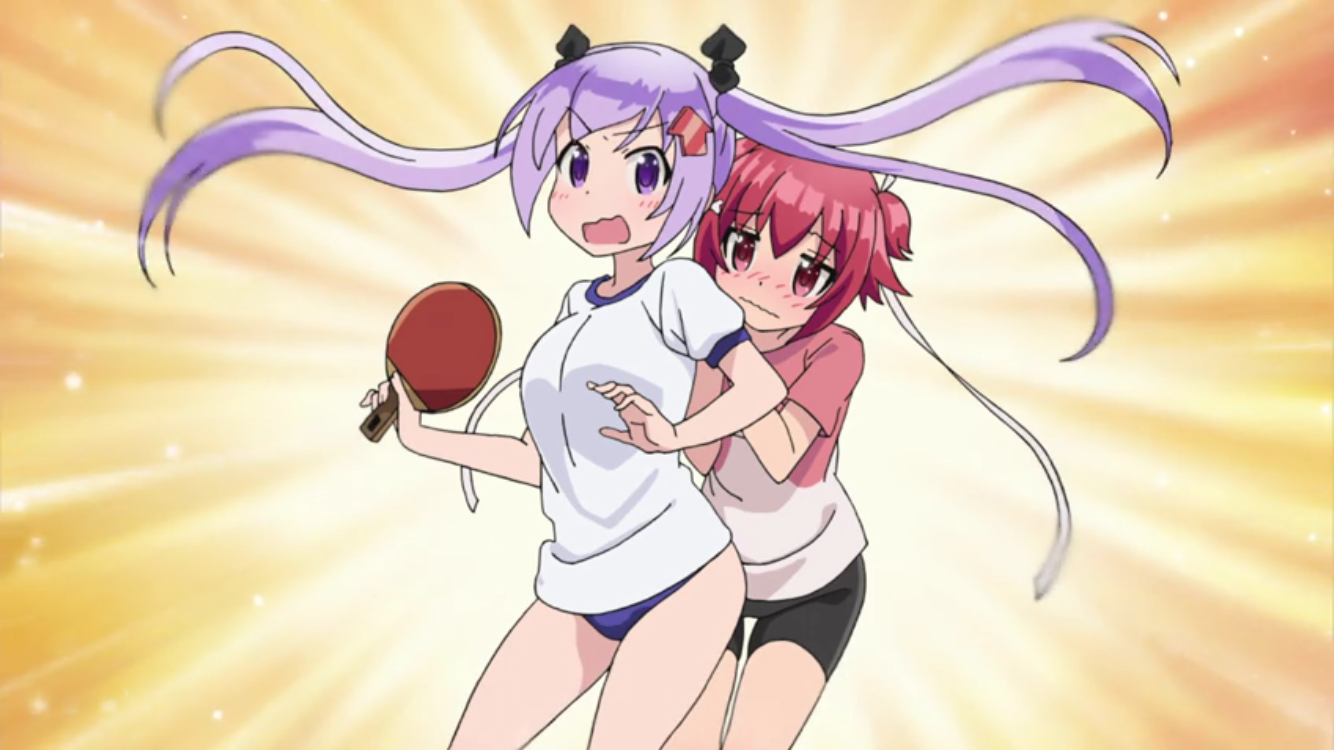 Proud table tennis team ace Agari runs into a timid girl outside school on her way to morning practise. The young girl, Koyori, turns out to be in the same year as Agari and loves table tennis. Agari invites her to a game and learns that Koyori, for all her meekness, could actually be as good as her.

The publicity imagery of Koyori (who looks about eight) baring her midriff as she jumps had already warned me that I may not be the target audience for this… but I was sort of wrong on that, because Agari is exactly the kind of flawed character I love. So this looks like this season’s NEW GAME! for me, where I can’t get over the blatant fanservice long enough to enjoy the likeable characters in relatable situations.

The only difference being the NEW GAME! characters were all adults and these characters are all around 14, but the with the faces of 10-year-olds. One such character has large breasts for her age and is literally called “Chestchest”, or as they localise it, “Boobyboob”, to ensure that you are focused on her chest even when it’s not Gainaxing all over the place. Boobyboob, with her nursery school face and jiggling breasts, is exactly the kind of character non-fans have in mind when they tell you they don’t want to watch anime with you.

So there’s a pretty liberal sprinkling of some pretty gross fanservice inviting the viewer to drool over young teenagers who look like even younger children. If you can get over that, Agari and her teammates are pretty great. She’s like Yukino from His and Her Circumstances, being motivated to be a higher achiever by all the praise she soaks up from her adoring fans. It’s an act, and one that risks being ruined by complete innocent Koyori, who likes and looks up to Agari but just may well be better than her. Agari also seems to have to work hard to maintain her status, coming in earlier than everyone else to practise, while Koyori seems just to love the sport, so we could have a hard work vs. talent story here too.

So that’s the deal. Gross fanservice of very young girls is the price you pay for a sports anime featuring a bunch of female characters who are friends with each other and dedicated to their club. There is probably going to be some good stuff ahead on a story level, but it’s only a matter of time before there’s a voyeuristic shower scene, a retreat episode where they all bath together and/or one girl groping another girl against her will. Someday we’ll make a bingo card for this stuff.