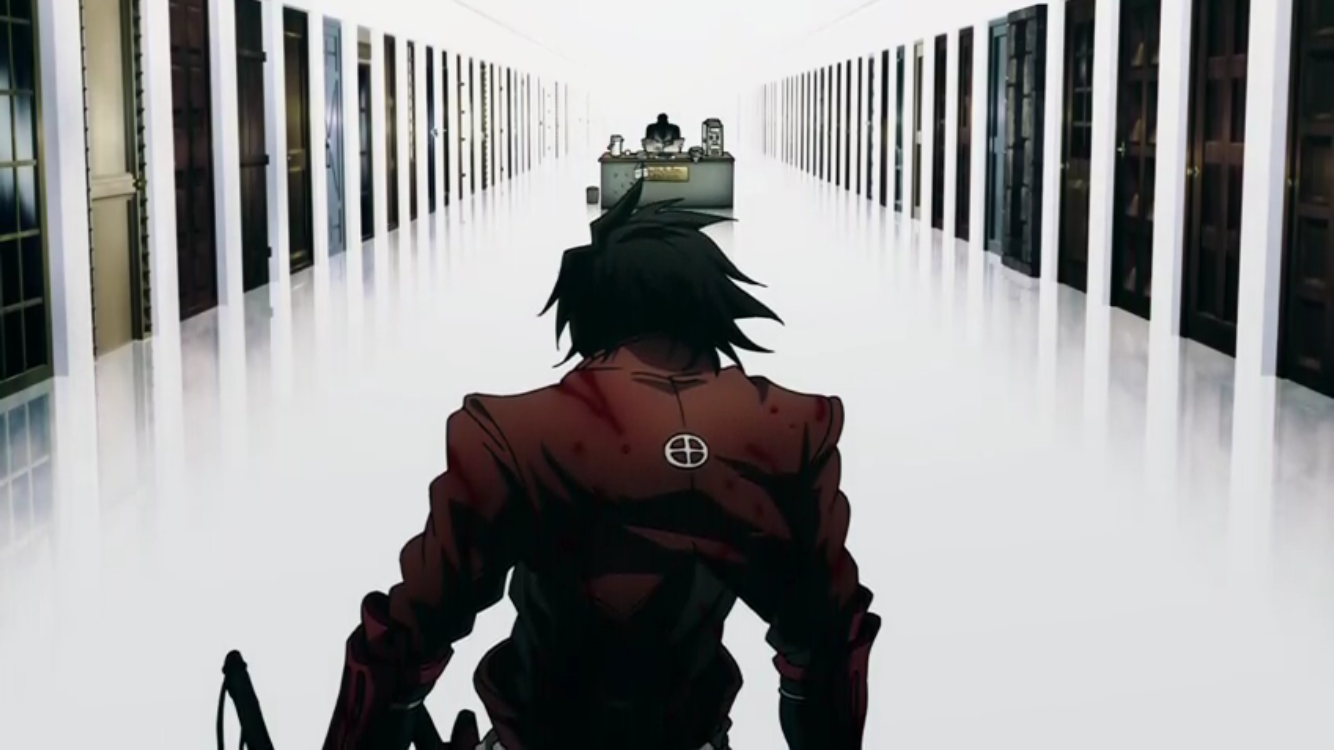 Toyohisa of the Shimazu clan is on the verge of death after fighting bravely in the Battle of Sekigahara in 1600, which signalled the start of the Tokugawa shogunate in Japan. Suddenly he finds himself in a white corridor, facing a man in strange clothes sitting at a desk in a white corridor. A moment later he is in a new land, rescued from death by people who claim to be famous Japanese warriors of the past.

Drifters is a high pedigree premiere, coming from the creator of Hellsing, and it has a strong concept – warriors from decades or centuries apart square off against each other and (presumably) come to work together. I am absolutely on board with that, and personally not bothered by the large amounts of blood and injury in this episode.

I am, however, bothered by the serious pacing and humour problems revealed in this episode, which could be just a good anime having a bad premiere or the sign of fundamental problems to come.

I had to watch this twice, because the opening battle which takes up a third of precious episode real estate was so hard to get into. Other premieres I had to watch twice: Bloodivores, probably the worst premiere of the season so far, and Touken Ranbu: Hanamaru, designed to be alienating for those coming in cold. We don’t care about the politics yet, or Toyohisa’s family, or even his life at this point! Show him being brave, show him being almost killed for it, then get us to the white corridor. This should take five minutes, tops. Anything else you want to say can be done through dialogue or flashback at a later point.

Can you imagine if Fullmetal Alchemist began with the episode about the Elrics’ mother? Fullmetal Alchemist has had two television adaptations, and both wisely gave you a couple of episode of business as usual, setting the appropriate tone, before taking you back to their origins once you cared enough to know more. The warriors even spend some time going over their identities and backgrounds in detail, so it wasn’t even necessary from a storytelling perspective; they just needed to show enough of Toyohisa’s dark, bloody world that we felt the impact when he was dragged away from it to a pure white and modern looking corridor.

The other problem is humour, which this art style does not lend itself to at all. Repurposing these detailed, heavy character designs for visual gags just doesn’t work, and either needed to go full SD or be cut completely. It is possible to do visual humour and even slapstick without going to comedy backgrounds and pared-down faces, and these designs are absolutely expressive enough to convey that. It was just a poor choice, but one that is so fundamental that it will probably continue for the rest of the series.

Other than that, there are no named female characters yet and only a single nod to queerness, in a throwaway line that only history buffs or people looking up the references are likely to get. ‘Few women and lots of obscure history references’ feels like where the show is headed though, and is probably more representative than the overly long battle scenes at the start.