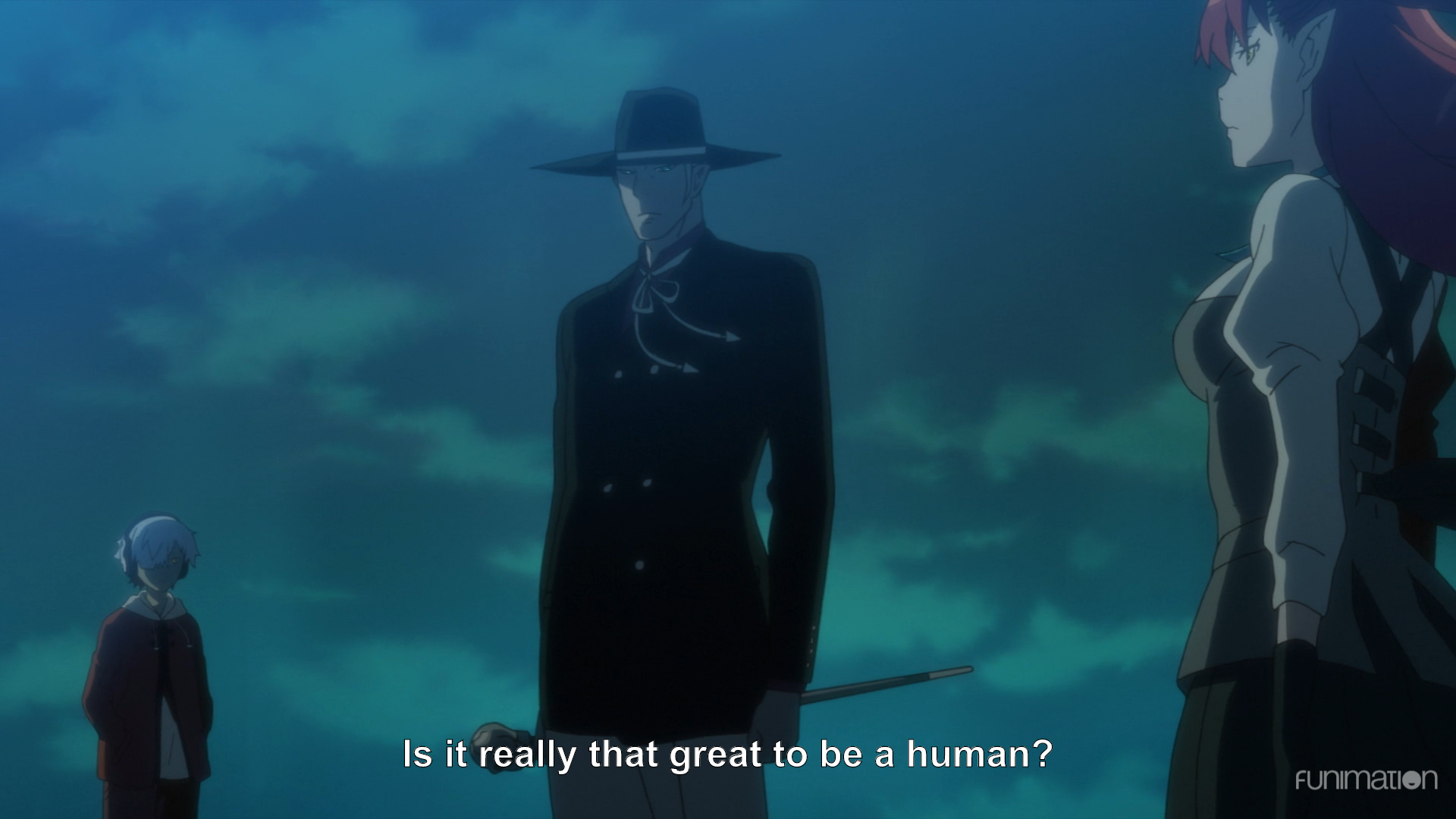 What’s it about? Sonia Summers is an idealistic cop who’s been transferred to Lower Town, where she faces the realities of a corrupt, uncaring police force. She crosses paths with a monster also being tracked by an otherworldly trio who hope that, by helping humans, they can become human themselves.

Poor BEM. If this had come out last season I would’ve called it one to watch, an intriguing concept that might still be salvaged in the coming episodes. Instead, it’s making its appearance at the tail-end of an absolutely dynamite series of summer premieres, wrapping things up with a whimper.

There will always be a place for episodic supernatural action series in anime, and BEM has a solid aesthetic going for its main trio of monster-hunting monsters (well…mostly; hold that thought). Unfortunately, this episode spends most of its time with the least interesting of them, giving us only two conversations to get a lock on who our ostensible leads are. There’s a sense that “Belo” and “Bela” are the two opposing views on humanity with Bem as the center figure; but the problem is that Bem is a brick wall, and by the end of the episode I seriously resented him.

Meanwhile, by the end of the episode I was genuinely unsure if Sonia was meant to be a recurring character or a one-off case—it seems like it should be the latter, as she never grasps what the trio is up to, but so much screen time is spent establishing her with the others at the margins that it feels like a waste to dump her as a one-episode lead.

But that’s only the beginning of the episode’s problems. Its animation is notably choppy in places (and trust me, I am not normally good at noticing things like limited cycles), and the numerous scenes that take place in dark buildings and alleys are dim to the point of inscrutability.

Meanwhile the CG is poorly integrated, and the selectively Devilman-esque monster designs are too smooth and bloodless—they end up clashing laughably against the grimdark background bloodshed. Even the worldbuilding feels half-finished, ranging from a fairly well-done final scene with a secret conspiracy to the flat, clunky dialogue that reveals to us the fact that the two halves of the city are named “Upper Town” and “Lower Town.”

But then again, perhaps the fool is me. After all, this is the 50th anniversary adaptation of well-established franchise, and it’s likely that there’d be some basic familiarity with the premise and characters. That gives it a certain amount of leeway in conveying ideas, where the main goal of the production can be recontextualizing old elements in a fresh light (if the adaptation is good) or….feeling tied to things that no longer work just because it’s what the audience expects (if the adaptation is half-hearted).

I hope BEM will be the former, but if this first episode is any indication…well, at the very least it hasn’t made this newbie feel very welcome to stick around and find out. And with so many other fantastic shows on offer this summer, it’s hard to give this one much of a recommendation.