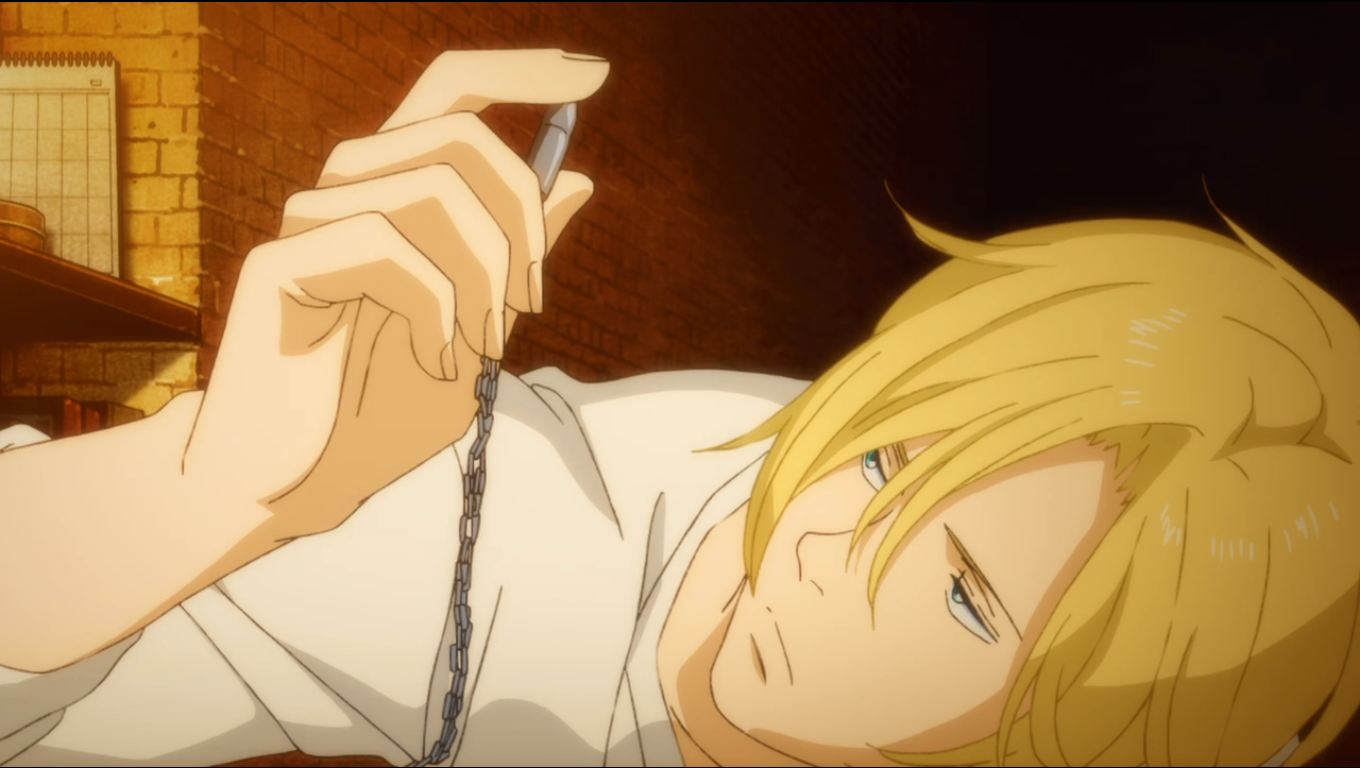 What’s it about? 17-year-old Ash Lynx is the protégé of mafia boss Papa Dino, plucked off the street at a young age and groomed as both pet and successor. An encounter with a dying man leaves Ash with a strange capsule and the words “Banana Fish”—the same words that Ash’s brother said before massacring his unit in Iraq and being left in a near-vegetative state under Ash’s care. Caught up in the conspiracy is 19-year-old Eiji, initially dragged along for his young face as part of a sting operation only to find his fate linked to Ash’s. Just what is Banana Fish?

Editor’s Note: Caitlin and Vrai wanted to review Banana Fish so badly that we decided to break tradition and have them both weigh in. We’d love to provide multiple write-ups for every premiere, but our funding isn’t there yet. If you’d like to see additional AniFem content, including more of these multi-person reviews, please consider becoming a Patron for as little as $1 a month!

Banana Fish is easily my most anticipated series of the season—nay, the year. The manga it’s based on is a classic 1980s shoujo series that, while many volumes are near-impossible to find in English these days, draws reverence from manga buff circles as a well-crafted, gritty crime drama set in New York and featuring a romantic-coded relationship between two young men.

Talented animator Akemi Hayashi adapted the old-fashioned character designs into something more sleek and modern while still retaining the original art’s personality. The director, Kyoto Animation alumna Hiroko Utsumi, showed off her chops in the first two seasons of Free! and her fans salivated at the opportunity to see her work on something more substantial. There was no way it could fail, right?

Now that the first episode is out, I’m happy to announce everything came together exactly as well as we’d all hoped.

Let’s be clear: there are no women in the first episode of Banana Fish. It is a shojo series with few, if any, female characters; the focus on character drama and homoeroticism are what define it as being aimed at girls. It comes from an era before BL was its own genre and was usually included under the shoujo umbrella. So, while it isn’t a series about women, the significance from a feminist point of view comes from the fact that it’s a story by women and for women with queer undertones.

It’s an incredibly well-done production so far, with snappy pacing and strong storytelling. The immediate connection between Ash and Eiji comes across strongly not through internal monologues, but subtext and camera angles.

It’s a pretty standard form of the principal of “opposites attract”—what draws innocent, naive Eiji and dangerous, damaged Ash to each other is precisely what they don’t see in themselves. Eiji can’t keep his eyes off Ash, and Ash in turn drops his guard just a little bit. In a metaphor so unsubtle it’s almost charming, Ash lets Eiji hold his gun, and Ash’s young friend Skip exclaims how Ash never lets anyone touch his gun.

For all its positives, there are some problematic sociocultural implications here as well. Banana Fish originally took place after the Vietnam War, when large portions of New York City were controlled by gang warfare. Ash, a white teenager with blond hair and green eyes, supposedly united the city’s “ethnic gangs” (the script specifically calls out Black and Puerto Rican groups).

And while many of the background characters are people of color, the named gang members in leadership roles are overwhelmingly white. The main exception is Skip, a young Black boy who looks like he’s about ten years old. There’s also the fact that New York is a very different place than it once was, as gentrification has transformed the city and many of its racial dynamics.

Still, there’s no denying that the story of Ash and Eiji and the mystery of the phrase “banana fish” will make a compelling human drama. I’ve adored Hiroko Utsumi for years, and I’m incredibly excited to see what she does with Akimi Yoshida’s groundbreaking manga.

This is probably the most anticipated show of the season for most of the AniFem staff: it’s both a classic shoujo manga and renowned for being a plot-heavy, pulpy crime drama that also has a queer romance at the heart of it. There’s a damn good reason for its cult following, and since the manga’s been out of print for years this is the best chance English-speaking audiences will have to experience the story (at least until Viz’s recently announced re-release makes it to shelves).

I cannot stress how important it is to set your expectations accordingly going in. Hiroko Utsumi’s decision to update the story from the 1980s to modern day has already paid a few dividends, particularly in updating the designs of prominent Black characters so they’re no longer Mr. Popo-level caricatures. But when it comes to the style of queer narrative at play here, Banana Fish is inextricably a product of the ’80s.

While I can’t guarantee the anime will be follow the original manga to the letter, I do feel it’s important to let prospective viewers (particularly young queer folks) know what a faithful adaptation would look like. As such, the next few sections will contain general SPOILERS for the Banana Fish manga. If you want to avoid these, skip to the bottom. There are a few paragraphs after the final screenshot that relate to the anime episode itself.

It’s also right out of the playbook of “root” logic, the armchair psychologist assumption that gay people have some central traumatic event that “caused” their queerness. For something similar, think of all those really lousy jokes about strippers having daddy issues, except in this case it leads to logic about “fixing” queer people.

Partly because of Ash’s trust issues (and very conveniently if you’d get backlash from your ’80s publisher for showing positive queer sexuality), his and Eiji’s romance is conveyed almost purely in emotional terms. No kissing, no intimate touching, but a lot of meaningful looks and declarations of devotion. You can see it in this episode, with the loaded metaphor of Eiji being the only one allowed to touch Ash’s gun (holy Freud, Batman), and the entranced, blushing looks Eiji gives under the thin veil of drunkenness. It’s all coding, because that’s what the time period demanded.

And speaking of what the times demanded: this is a great romance, well told, but don’t come here looking for a happy ending. Granted, Director Utsumi has mentioned in a previous interview that she’s a big fan of the central relationship, which might lead to new additions in that department, but think of that as a happy surprise rather than an expectation. The anime’s modern setting doesn’t necessarily mean that the logic of the plot has been updated, and that’s going to be Banana Fish’s biggest hurdle.

Readers might be comforted to know that the slur dropped unceremoniously into the first part of the episode isn’t actually in the original text or the spoken dialogue. It’s an insult, but the translator apparently took it upon themselves to go one step further in a really upsetting way, which will hopefully be changed.

But, as I mentioned, this is a show where the lead has a metric ton of internalized homophobia. This is sometimes a harsh and ugly story. And while it does have a very diverse cast, the original manga wasn’t exactly top-notch at racial representation, either.

As far as the actual structure, this first episode is somewhat hectically paced, rushing to establish the mechanics of the mafia and Ash’s world as well as the basic outlines of the conspiracy. The premiere only really finds itself, as you might expect, once Ash and Eiji meet. Everything else seems like a race to get there, but in those last few moments the tension crackles and there’s a true sense of passion in the direction.

The last five minutes are a tantalizing glimpse of what this series could be, provided it takes a hard look at what a modern update truly needs to mean and keeps its focus on the beating heart of the show. If it can manage that, the anime of the season’s already been found.