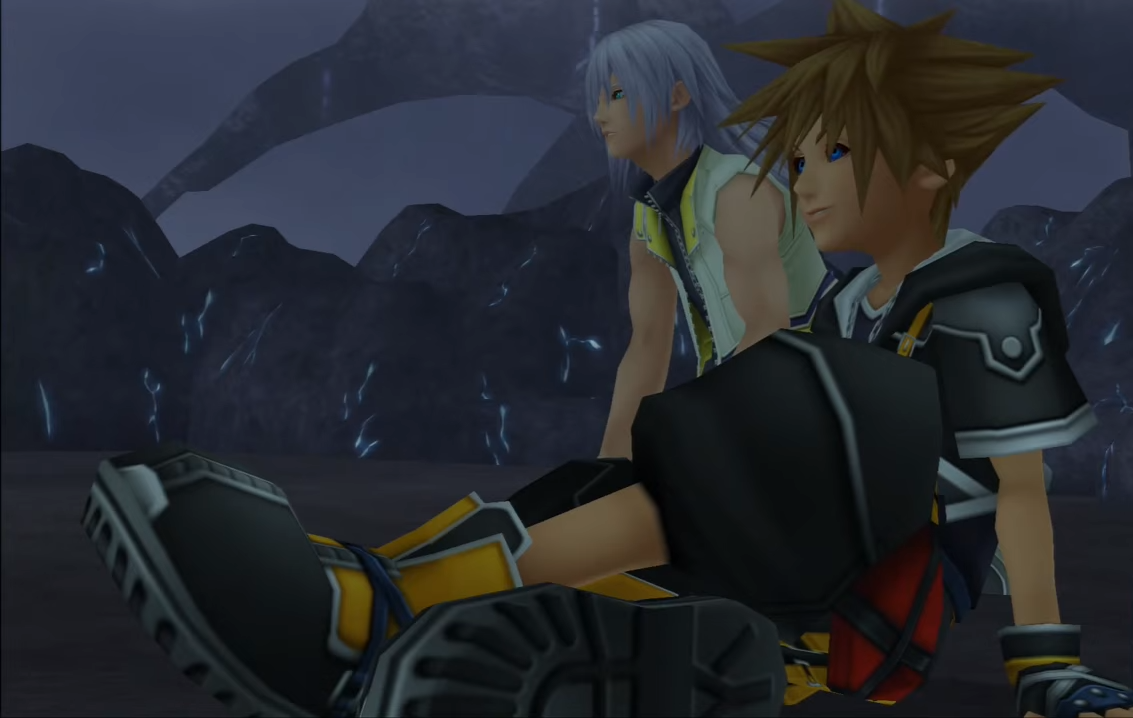 An omnipresent franchise for over a decade and a half, Kingdom Hearts has the honor of bringing together the otherwise-disparate audiences of Disney and Final Fantasy fans. It’s to the point of attracting its own dedicated (Hollow) bastion of enthusiasts loyal to its particular brand of crossover action-RPG weirdness, particularly the game’s original characters and their stories.

The central story of Kingdom Hearts is mostly known for two key reasons: the increasingly convoluted mess of a timeline its continuity has built, down to Square-Enix releasing multiple recompilations and official recap videos just to help people keep up; and the LGBTQ-skewing elements of the characters and their relationships.

That second part is to be the key focus here: Kingdom Hearts is really gay, and the fans definitely seem to know it. The question becomes: what resonates in these particular games with that audience? The answer, I would argue, is that the queer themes have always been present, and the audience was able to grow with and embrace that series as it explored those more in subsequent games.

But this element is pronounced in Kingdom Hearts on an even deeper, more serious level. The very first images you get when starting the first game, alongside its iconic j-pop intro theme, are a whole lot of pining hands outstretched between lead boys Sora and Riku, with the rest of the game’s story itself focusing on their intertwined rivalry and lifelong friendship.

It has to be mentioned up-front, of course, that a central part of Sora and Riku’s dynamic in KH1 revolves around the girl between them: Kairi, a de facto video game love-interest plot device that they both seem to be competing over “rescuing.” Kairi’s own hilarious lack of chemistry with either boy, which renders her a nonentity when it comes to exploring the queer themes of Kingdom Hearts, is something I’ll touch on a little later, but it bears mentioning how the dynamics of the trio shift in complexity as the story progresses.

Riku asks to share a life-bonding Paopu fruit with Sora before he makes a push for a connection with Kairi, with the player asked to interpret subtext at this point in regards to his feelings for both characters. However, Riku’s fight to keep Kairi out of Sora’s hands for the first game becomes a lot more about himself than her as it goes on.

It gets to the point that Sora and Riku’s separation at the end is the more tearful, passionate display of a relationship than Sora’s one-sided rescue romance with the unconscious object of Kairi. The player starts to become aware of the undercurrent of jealousy that seems to run through the story—that Riku doesn’t want Sora to succeed in a bond with any other entity, be it Kairi or even the Keyblade itself.

This characterization adds its own unique wrinkle to the self-discovery elements so early in the Kingdom Hearts saga. That Riku is fixated on obtaining the Keyblade and protecting Kairi reads as him performing the role of a straight rival love-interest, even as his attitude towards Sora makes clear who he’s really interested in. There are layers of metatext that could be peeled back here, from genre expectations to the audience feeling like they had to embrace that heroic heterosexual masculinity themselves.

But then it speaks to the development of both Riku and the audience observing him that once he learns to embrace himself and be honest, he effectively discards all his superficial interest in Kairi and is able to openly express devotion to Sora for the rest of the series. Riku’s true possessive feelings towards Sora in the early parts of the story fall into their own unfortunate tropes, but they set the stage for the journey these characters will take as the series continues.

That’s the turning point of the romance in Kingdom Hearts, marked by Riku’s own journey parallel to Sora’s in Chain of Memories and the extreme emotional complexity of their reunion in Kingdom Hearts II. As mentioned above, any fixation Riku appeared to have on Kairi has all but disappeared at this point, giving way to his personality revolving around his relationship singularly with Sora.

In fact, the Riku Replica in Chain of Memories acts as a specific call-out to the character-reading of Riku as jealous of Sora’s interest in Kairi. Similar to the disparity in Sora’s reactions to being separated from his friends in Kingdom Hearts, a similar spin manifests when he’s reunited with them in KH2: exchanging simple pleasantries with Kairi, while he’s overcome with emotion to the point of weeping when he finds Riku again.

All of this is mirrored in the introduction of Roxas and Axel’s even more unambiguous emotional connection and relationship, one so convincingly told I was immediately sold on it despite being a conventional teen who had never “shipped” two guys together before. If the player wasn’t convinced of the romantic potential of Sora and Riku’s relationship before this stage of the game’s story, then seeing his mirrored self and the devotion Axel goes to for him only serves to make that possibility explicit.

Somewhere in this procession of events is where many players, myself included, made the key realization of just where the hypotenuse actually lies on the Sora/Riku/Kairi love triangle, and it is an eye-opener, to say the least.

That’s the key point I’m finding my way to: Kingdom Hearts’ development of the queer romantic themes in its storyline allowed it to grow alongside the audience who was engaging with it. Those elements may not have been specifically intended as queer when first introduced, but they were read that way by a slew of developing players, and the good they did for that aforementioned self-discovery cannot be understated.

When first released (or even discovered by younger, latecomer fans) Kingdom Hearts’ fanbase were in middle or high school. It’s a rough time: young adults are developing, finding themselves, and hormones for love and lust are searching for directions to go. A story or a piece of media can’t “turn” us gay, but they can provide perspectives to help us find our way.

This is the personal side of this story for me: That regardless of how explicit the text of these games intended them to be, a player in the same mindset would understand that Sora had both boy and girl love interests. That idea that attraction could span people regardless of gender was, for me, groundbreaking on the possibilities of love.

Remarkably, it was longer after this that I was able to ascribe the term “bisexual” to my and Sora’s sexualities. This series normalized the idea of feeling love and attraction to anyone you had an emotional connection with; anyone you could find yourself pining for. I don’t want to claim that Kingdom Hearts specifically Trojan-Horsed in a queer-resonating narrative gradually, but the way it went about it definitely timed well with this player’s understanding coming around to “You can just feel that way?”

That the power of feelings is so integral to Kingdom Hearts’ narrative invites the audience to project their own in as they go. Opening up to new feelings and emotions is as integral to completing the stories as the actual gameplay portions.

That isn’t to say there aren’t criticisms that can be leveled at Kingdom Hearts in spite of its narrative of progression and self-revelations. Simply put, one reason fans were able to latch on to these bisexual boys at all is a lack of options. For all his deep, passionate handling of strong male bonds, Nomura affords much less attention to the girls’ side of the story.

Even if you go in as a young, self-presumed-straight guy (as I did) looking for any fantasy girls to be interested in, you’ll likely be left wanting by the female cast. This did, of course, play right into that bisexual revelations—as a friend of mine put it, “Lack of compelling women making me realize I’m queer is a common origin story!” Kingdom Hearts ultimately appeals to audience attraction in a way irrelevant to gender, but it does need to be acknowledged that that may be for lack of trying in some areas.

As well, there’s also the point that Kairi certainly seems to “win” Sora in the love triangle when all is said and done at the end of Kingdom Hearts III (the end of the story for now), cementing her status as a contractually-obligated female love interest for the hero and little more. It’s another issue of the series that deserves criticism: for all its embracing of the queer feelings the audience was growing into along with it, it also takes several “steps back” in regards to the narrative.

Kairi’s obligatory status aside, elements of 358/2 Days seem to be trying their damndest to recast Axel’s feelings for Roxas as more platonic or brotherly, in direct contrast to his previous all-but-stated romantic devotion. This comes alongside the introduction of Xion, who seems to be there as a more conventional, female shipping option for Roxas.

To their credit, Xion and her roundabout counterpart Namine do represent a somewhat more developed female character presence in the games. But, like Kairi with Sora, the vague connections the more straight-inclined members of the fanbase see between them and Roxas and Riku, respectively, highlights that hetero-hanger-on status. It’s one that seems to be ultimately rewarded by cementing a Sora/Kairi ending for KH3.

Then again, it’s perhaps not as said and done as that, with Sora immediately disappearing from Kairi’s side to wake up in a moody, rain-soaked cityscape with Riku. Kingdom Hearts’ status as a mass-market commercial product necessitates some degree of trying to please all components of its base at once, which does lead to a concern that this “two steps forward, one step back” approach to representation could continue indefinitely.

Like so many stories with queer overtones and a fanbase that flocks to it, Kingdom Hearts still sadly lacks any “hard” confirmation of its queer characters or relationships. Elements like how truly romantic Sora and Riku’s feelings for each other are, or the real depth of Roxas and Axel’s relationship, are relegated to the realm of subtext at best and intentionally designed queerbaiting at worst.

Regardless, those elements are still there, and their presence at the time and for the audience they were released to has resulted in a perfect storm for many players to “wake up” to their identities simply via compelling exposure to it.

For its part, perhaps Kingdom Hearts has grown up a bit itself after all this time, such as when we Sora happily takes on both boy and girl dance partners in the Tangled-themed world of Kingdom Hearts III. But at this point, those themes are less about the series itself and more about the effects they had on the fans who grew to love it at the same time. Those fans didn’t just make Kingdom Hearts the franchise it is; the series helped those fans realize who they were.

Chris is a freelance writer specializing in reviewing anime, but he also likes games, toys, and tokusatsu. You can find him blogging about these on his tumblr, or follow him on Twitter (@BeeDubsProwl).