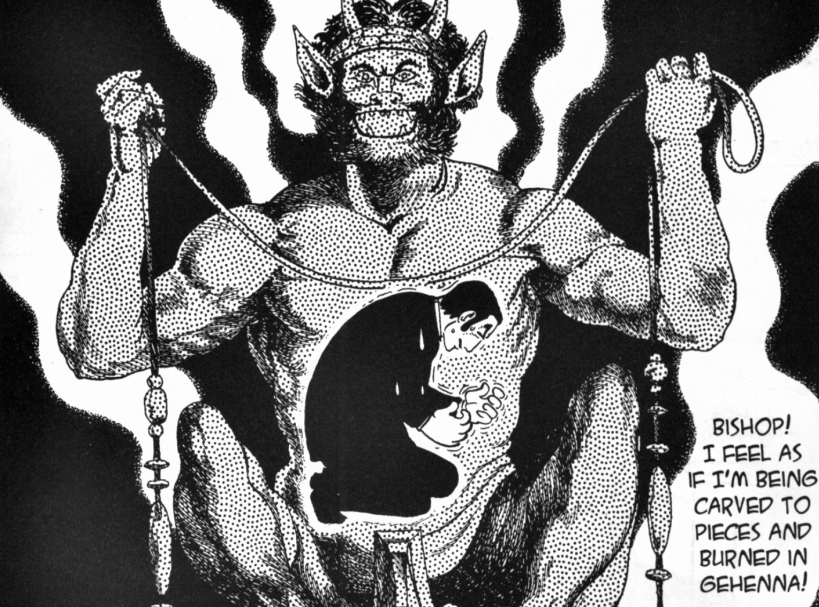 SPOILERS for MW and Apollo’s Song.

As the “Walt Disney” of anime and manga, Tezuka Osamu is a name that any fan of either medium immediately recognizes. Similar to Disney’s reputation, Tezuka is best known for his adorably pleasant art style and family-friendly works, especially in the US where only a fraction of his bibliography is officially available in English. This wholesome image persists today, even though Tezuka himself had tried to distance himself from it.

In the 1960s, a manga genre called “gekiga” emerged. The term translates to “dramatic pictures” and was intended as a contrast to manga, or “whimsical pictures.” It was a movement of manga artists pushing back against the more “childish” and “silly” perception of manga which Tezuka had pioneered. With attention and popularity shifting towards this kind of manga that tackled more mature subjects, such as explicit violence and sexuality, Tezuka put forth his own gekiga.

As with his previous works, he still included his trademark progressive ideals, from themes of environmentalism to anti-discrimination, but in gekiga they were molded to more adult material. His gekiga show some artistic experimentation, but also dig further into his conservative ideas about gender and sexuality, which were more ignorable in titles aimed at wider audiences, like Princess Knight and Black Jack. Two stories in particular, Apollo’s Song and MW, hammer in how much of his work was steeped in heteronormativity and homophobia.

Apollo’s Song was serialized in 1970 and follows Shogo Kaishi, a disaffected youth who’s been sent to a psychiatric facility for his violent attacks against animals. He specifically targets affectionate pairs of animals, as Shogo detests the concept of love due to his own unloving upbringing by a single mother.

While undergoing electroshock therapy, he has visions of a goddess sentencing him to tragically fall in love over and over again. This kickstarts a series of dreamy, melodramatic vignettes strung along by an overarching narrative about Shogo experiencing the pain and joy of romantic love.

Throughout these vignettes, even when two characters are viciously hostile towards each other, they always eventually fall in love. For example, the first vision is extremely jarring, with Shogo as a Nazi soldier and his love interest as a Jewish girl on her way to a concentration camp. By the end, they die in a field together, mutually swearing their love for each other. Each of Shogo’s other visions have a similar arc of romantic tragedy that ends in mutual suffering.

Tezuka touches on other subjects such as war, technology, and abuse, but its thematic core is exploring heterosexuality as a primal aspect of humanity and nature. The narration extrapolates on biological reproduction as the spiritual foundation for humankind, declaring: “It is the mark of love, truth, and sincerity between man and woman, male and female. […] As long as the world exists, men, women, and the children they bear will repeat this endless drama.”

To hammer home this central theme, in another vision, Shogo is an oppressed human under the rule of his love interest, a ruling “synthian” queen. The synthian craves to understand human love, specifically cisgender, heterosexual sex. She eventually modifies her body to have human genitalia after Shogo remarks that, from his viewpoint as a human, she can’t truly experience love without it.

In the end, the visions blur with reality after Shogo commits suicide in the real world over the death of a woman he fell in love with, but his soul is still condemned to suffer through tragic experiences of love again and again until the end of humankind itself. Despite this never-ending cycle of momentary bliss and final agony, heterosexuality is put on a pedestal. It is the stuff of reality and legend; the past and the future; the body and the soul.

Tezuka draws a world where modern society may throw up all kinds of obstacles, but heterosexuality is our basic nature. It’s inevitable and vital, no matter how painful. Here, heterosexuality is more than mundanely normal, it’s transcendent beyond logic and life.

MW, running from 1976 to 1978, is a much more different work, a pulpy political thriller that follows two men: Iawao Garai and Michio Yuki. Yuki is an amoral serial killer who torments the families of powerful politicians. Garai is a repentant Catholic priest who listens to Yuki’s confessions of brutality but refuses to turn him into the police. Their lives are entwined thanks to a government conspiracy and a tangled sexual relationship.

Yuki is the archetypal Evil, Degenerate Queer. He’s completely androgynous, easily presenting himself as a handsome man or a beautiful woman. He crossdresses primarily for his murder and kidnapping plots, imitating the various women he’s killed. Yuki has sex with both men and women, but mostly to further his schemes.

Yuki embodies the homophobic and transphobic stereotype of queer men as dangerous, perverted imitators of women. There is a deep dread directed at the contradictions of a man who plays a woman so easily, who is so cruelly calculating and yet indiscriminate in his sexuality.

This is especially clear when his femininity is contrasted with a cis woman whose femininity, including her romantic love for Garai, is framed as innocent and natural. Yuki’s sexualized androgyny is not simply strange, but a literal weapon in his arsenal, akin to the drugs he uses to torture and kill women during sex.

Alongside that, there’s a subplot in which Yuki assaults the woman who’s in love with Garai, eventually pushing her to experience Stockholm Syndrome for Yuki instead. It’s implied that Garai and this woman could have become a “normal,” loving, heterosexual couple if not for Yuki. And if this framing of his androgyny and murders as inseparable traits wasn’t enough, there’s even a couple moments of implied bestiality with his pet dog to really hammer in that he’s totally amoral.

Later in the manga, it’s revealed that Garai and Yuki share a past as the sole survivors of an accident involving a lethal gas weapon, the eponymous MW, that poisoned an entire island military base. Yuki was not only affected by the leak as a young child, but also sexually assaulted by a teenage Garai.

These flashbacks mean to explain the current state of Yuki’s violent depravity, Garai’s immense guilt, and their ongoing relationship. As adults, the two men frequently engage in consensual sex, but Yuki is the one who always initiates; in contrast, Garai is conflicted and often describes the encounters as sinful.

Yuki cites Garai’s assault on the island as the origin for his attraction to men, framing it as a sexual awakening. His queerness is a pathology that’s inextricably tied to the MW leak. There’s some sympathy for Yuki, whose mind was irrevocably warped by sexual trauma and poison, but it’s more for the concept of a ruined child than Yuki specifically.

In addition, it’s the tired stereotype of queerness being caused by sexual abuse—that being queer must be linked to some deep trauma that makes a person “diverge” from a “normal” life of heterosexuality. It’s in this that it becomes clear that Tezuka has little care for the specifics of what it means to be LGBTQ+, instead wanting to play around with “queerness” as a broad trove of edgy storytelling toys.

Though Garai’s inability to go against Yuki is shrouded under his Catholic guilt, it can also be interpreted as part of Garai’s queerness, enabled by Yuki. Garai becomes an enabler in turn, even assisting in some of Yuki’s crimes. While he regrets assaulting Yuki, Garai’s rationale for the past rape and their current sexual relationship boil down to feeling “temptation” for Yuki’s femininity, whether as a child or an adult. In essence, Garai is dragged down by Yuki’s seductive queerness, whether it’s in sex or crime.

Yuki is the ultimate corruptive force of heterosexual monogamy, as well as the nuclear family, killing the children of powerful men involved in the MW incident. However, erasing any remaining sympathy, Yuki clarifies that he’s not really out for revenge but actually intent on releasing more MW before he himself dies from the gas’s long-term effects, inducing a worldwide apocalypse. Yuki may be a victim of crooked politics that allowed the MW leak, but he’s also a dangerous consequence himself.

While Tezuka does take a moment to showcase a lesbian couple as loving and not predatory, it doesn’t balance out against the weight that male queerness is given in MW as a menace to society. Much of the horror relies on male queerness as not simply effeminate or odd, but truly scandalous and deviant. In creating a personification of anxieties around Cold War nuclear armament, Tezuka also posits queerness as just as monstrously devastating.

A Flawed Body of Work

Between Apollo’s Song and MW, it’s difficult to come away without concluding that Tezuka’s ideal future just didn’t include LGBTQ+ people. Each work on its own might allow for a more generous interpretation of basic ignorance, but together they paint an uneasy picture.

While he posits that gay people are stigmatized unfairly as a sexual minority, they are evidently queer for a reason; any deviation from cisheterosexuality is deviance in itself. Men’s sexuality in particular can only healthily exist in certain parameters, or else it’s misguided and perilous. Apollo’s Song sees a boy who rejects heterosexuality as rejecting a divine truth, while MW sees two men’s queerness as indicative of modern societal ruin.

Overall, Apollo’s Song and MW may be most valuable as examples of Tezuka’s complexity as an artist. Gekiga was a movement of manga by artists who wanted to explore more nuanced, compelling ideas in both visuals and themes. However, while the art in Apollo’s Song and MW is stunning at moments, their regressive politics ultimately stunt their thematic maturity.

For manga so steeped in complications of gender and sexuality, there is a fundamental shallowness to exalting heterosexuality in the light and resigning queerness to the dark. While Apollo’s Song and MW contain historical insight into Tezuka’s artistic experimentation, the two stories show some deep creative limitations.

Tezuka is famous as an artist who sincerely imbued his work with politics. Even when he didn’t have all the answers, there’s often a strong sense of justice, imploring his fans to be critical of the powerful and empathetic towards the vulnerable. These ideals of social justice go hand-in-hand with his Disney-esque image and stature, evoking an almost godly figure of universal progressivism.

Tezuka is only a single person, but his legacy looms large, making it even more important to discuss his work honestly. By doing so, not only can we have richer discussions about his work, but also shape his legacy to be more human.

Editor’s Note: This article was edited after publication to update the header image, include additional content warnings, and add a note about the manga pages reading left-to-right.

Malia is a queer adoptee from the Pacific Northwest who cares about manga, films, and libraries. Sometimes they write. You can find them on their Twitter and their co-run blog, Coherent Cats.