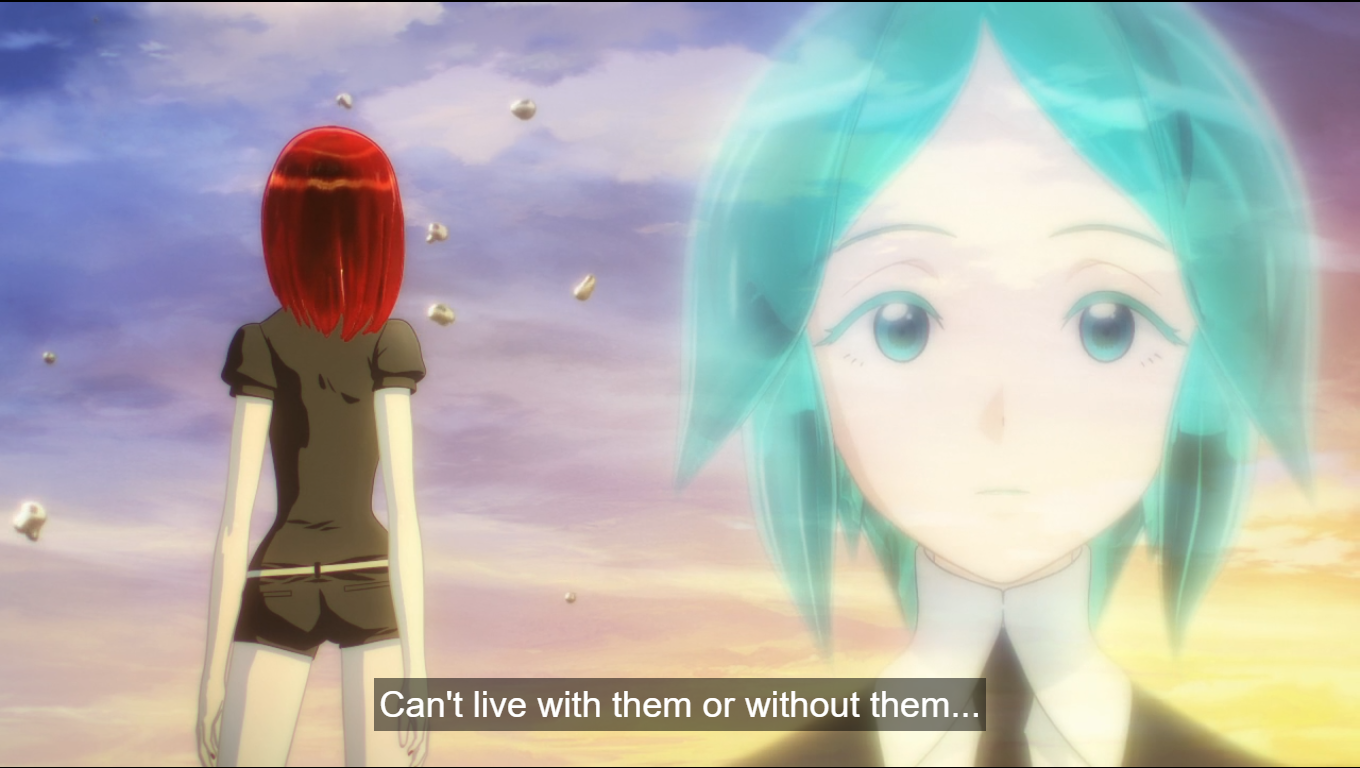 Land of the Lustrous has proven to be a sleeper hit of the Fall 2017 season, with its beautiful melding of CG and traditional art, creative direction, likable characters, and penchant for cliffhangers. It also made minor waves by deciding to refer to almost the entire cast with neutral “they/them” pronouns. In an industry that has historically elected to choose binary pronouns for characters who aren’t gendered or are gendered ambiguously in the original text, this marks a small but important—and most crucially, conscious—shift.

The decision-making process for Lustrous began with the translation of the manga in early 2017. Lauren Scanlan, an editor at Kodansha Comics, spoke with me about the multi-step process that led them to use neutral pronouns for the characters:

For this series, the translators and I talked quite a bit about how to approach pronouns in this series. Because it’s a fantasy story that does not obviously take place in Japan, we decided to omit all suffixes (-kun, -chan, -oniisama) and instead adapt them into the names themselves (aside from Sensei, which is widely understood in the English language). There’s a good note about this in volume 3 or 4 in regards to Alexandrite’s name, for example. And though the Japanese uses some pronouns (boku, kare, etc.), these are more to connote power dynamic relationships between the gems than assign them any sort of gender role.

We did consult with the author and the Japanese editorial team about the series, and ultimately, the decision to use gem’s names (or the use of “gem” as a pronoun!) was from our side, to keep clarity in the English language version of this wonderful story with a large cast of characters who may or may not be on-screen for the dialogue.

Scanlan’s commentary includes a crucial fact about translation that fans often forget: context is key. A fan who can pick out the odd use of kare (a masculine third-person pronoun) in dialogue, thus declaring that clearly these characters must be male, lacks the grasp of a translator who’s devoted themselves to understanding not just the words of a language but the nuances of speech, implication, and situational meaning. This is not to say that professional translators are flawless, untouchable beings—far from it, as we’ll discuss later—but that there’s complex reasoning behind why certain translations are chosen.

Kodansha’s localization team, as Scanlan mentioned, also spoke with Lustrous’ manga author Haruko Ichikawa as part of their process. This is one of the wonderful things about globalization, and a far cry from the stabs in the dark that characterized the efforts of the 1990s.

That information-sharing wasn’t a one-way street, either. Ichikawa clearly thought about her discussion with the Kodansha staff, and that discussion paid dividends when the time came for the anime adaptation to add subtitles. Deven Neel, the translator contracted by Sentai Filmworks to translate the Lustrous anime, received specific instructions with regards to the characters’ genders:

The whole decision to use gender neutral pronouns for all of the characters came from the series creator. Before I even started I was told that they wanted to keep the characters essentially genderless by avoiding using “he” or “she,” which really only left the option of “they” because using “it” or something horrible like that was absolutely out of the question.

In the Japanese script, the characters use what is actually the generic pronoun for “he” from time to time, and a lot of the characters use what are typically considered more masculine versions of the word “I,” which is something we don’t really have in English. But it can feel as though it has a bit more room for ambiguity in Japanese, whereas in English it feels like it very clearly assigns them one way or another, which is not what the creator intended.

In the span of only a few months, the discussion of how these characters should be treated evolved drastically, thanks in part to someone thinking to add non-binary mentalities to the discussion. This is how change happens: because someone in a position of influence makes the conscious decision that inclusion should be a priority, thus bringing it to the attention of people who are not necessarily prejudiced but who have gaps in their understanding.

In the case of this translation, it introduced a new possibility for conveying the ambiguity that’s always existed within the Japanese language but has only begun to be embraced by English speakers. Though the days of 4Kids Entertainment turning rice balls into doughnuts is far behind us, localization is still a key part of translating. It’s simply moved into the more intangible realm of how language is structured.

Expanding the usage of gender-neutral pronouns in English isn’t just a discussion relegated to anime and manga translations. Let’s talk about the case of John E. McIntyre, a copy editor who works predominantly for the Baltimore Sun at present. While that newspaper has and continues to have a fairly wide circulation, McIntyre’s clout is considerably weightier than that: he’s a chartering member and two-term president of the American Copy Editors Society, the foremost source for editors and copy editors in the U.S.

McIntyre, you see, has long been in favor of the usage of the singular “they” in newsprint. This has been the case for over a decade, though this 2012 blog post is one of the earlier acknowledgements in so many words. Essentially, the position was to allow the singular “they” if the writer used it rather than issuing a correction. This evolved into a public stance in favor of the word in 2015, and periodic posts promoting arguments in favor of its usage (or dissecting dismissals) ever since—even on video.

These arguments are made through the lens of grammar rather than social context, but that doesn’t make them less appropriate or important. Part of the objection for “they” as it’s used by trans and nonbinary people is tied up with assertions that it’s grammatically incorrect, so challenging that stance demolishes one smokescreen in a larger discussion. Merely arguing that the singular “they” is acceptable has been an uphill battle bravely fought.

This same discussion must be had about the way we talk about anime and manga. While McIntyre was arguing about the rights of a word within the context of its own language, both translators and bloggers must deal with this additional wrinkle of ambiguity in language.

For years, the default decision has been to choose a binary gender based on what the translator found most appropriate. Examples litter the translating world: the agendered angels and demons in CLAMP’s Wish were universally called “she” and “he” respectively; Soul Eater’s Crona was assigned male pronouns despite having no confirmed gender; and the AFAB Kino of Kino’s Journey (2003) is referenced in subtitles as “she” despite the avoidance of pronouns in the Japanese script and the character themself objecting to being gendered as either male or female in-story.

Even the rare and recent case of Attack on Titan’s Hange is uneven, as female pronouns were used during the show’s first season and revoked only after a mandate came from the author, despite a lack of pronouns existing throughout the original Japanese text. Even then, the subs bend over backwards to avoid third-person pronouns—something that’s perfectly natural in Japanese but often sounds stilted in English—rather than even considering the use of “they.”

Sentai (or the translators Sentai employs) has been pushing back against this aversion to “they” in recent seasons, both with Land of the Lustrous and Made in Abyss. But there comes a time when simply allowing “they” to go through without comment isn’t enough, especially when Funimation, one of the biggest translation houses in the industry, is still prominently gendering agendered characters. Before, these decisions were made on the assumption that there was no neutral equivalent in the English language. That is demonstrably no longer the case, and indeed never was.

Language is political; it shapes people’s perceptions and gives voice to (or alternately, silences) modes of thought. To use a very tired example, it’s the difference made in labeling groups “terrorists” versus “freedom fighters.” Likewise, the language people use is influenced by their upbringing and societal privilege. A translator who is cis and doesn’t know any trans people, for example, might never even consider the need for pronouns other than “he” and “she” because it doesn’t apply to them personally.

And while people have the capacity to learn and change over the course of their lives, manga scripts and subtitles are (usually) forever. True, modern streaming has made some allowances for translators to return and tweak scripts with inaccurate or problematic translations (though they often don’t; as of writing this, Crunchyroll’s Yuri!!! on ICE subtitles still say “girlfriend”), and occasionally a popular series gets a new translation later down the line; but in general, translation choices are set in stone once they’re pressed into physical media.

For example, Satoshi Kon’s Tokyo Godfathers, which was translated over a decade ago, made overtly bigoted translation choices regarding the film’s trans woman character, including choosing to translate one character addressing her as “obasan” (aunt) as “uncle.” The film was recently put back up on Amazon Prime with that same translation, since streaming services often purchase the rights to a series but don’t have the proper staff, ability, or interest in correcting outdated translations.

A thoughtless decision has effects for years and years after the fact; and as time goes on, the assumption of translator expertise, especially among more casual viewers, grows undeserved around these mistakes. This is why style guides—a set of consistent rules put in place for grammar at a publication or company—are important not just for the Oxford comma but for the handling of pronouns (or lack thereof).

Change doesn’t happen while waiting around for people raised in a binary system, particularly those who are not trans, to realize that there are other ways of referring to people. They happen, as our discussion here has made clear, because people in positions of influence make the decision to take a stand for inclusion.

By insisting that characters whose genders are unspecified be referred to as “they,” authors, translators, and bloggers give readers a new way to refer to those characters without feeling the need to “figure out” their gender (and it’s worth thanking sites like Crunchyroll who’ve taken the initiative with their editorial team to do just that). It also sends a message to other, more reticent translators that “they” is indeed a viable tool at their disposal.

Blogs and subtitles can seem like small potatoes in the grand scheme of things, but every article written or series translated really does help normalize language usage. This, in turn, helps to spread awareness of an entire group of human beings and a way of thinking that isn’t tied to society’s tired repetition of “the war of the sexes.” Lustrous’ translators made a decision that created monumental ripples, offering non-binary viewers a new chance to see themselves in fiction and taking a stand on how the translation industry can evolve. Here’s hoping others follow their example.