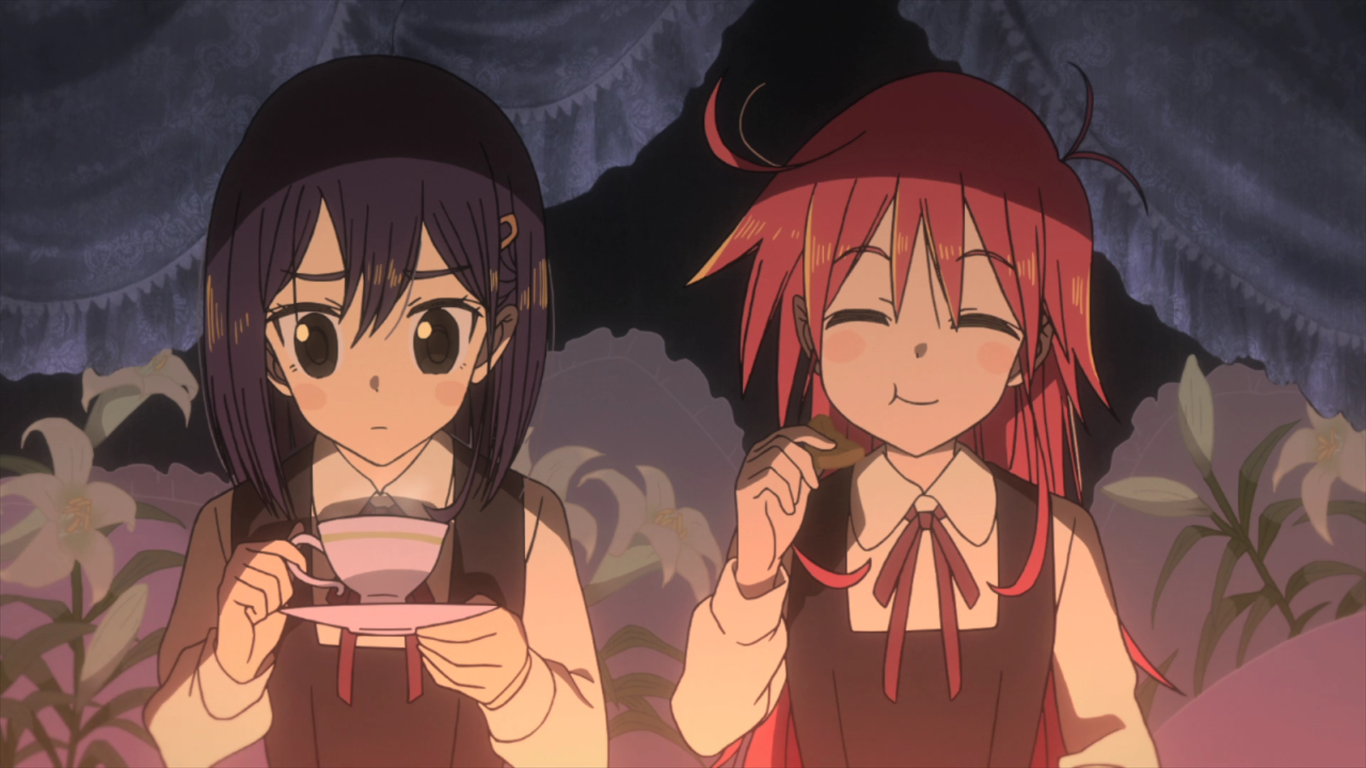 FLIP FLAPPERS is many things: a magical girl adventure through visually stunning fantasy lands, a multi-layered exploration of its characters and the nature of perception, a problematic fave, and a queer coming-of-age story about an insecure girl who’s just trying to figure herself out. The story follows Cocona, a (seemingly) ordinary girl who gets swept up in a quest to collect wish-granting “fragments” in Pure Illusion, a magical dream-space that changes to reflect the psyche of those who enter it.

Each visit to Pure Illusion is both a genre homage and a character exploration, often touching on themes of coming-of-age and the complicated business of sexual maturation. As part of this trend, Episode Five, “Pure Echo,” develops and explores our heroes and the trials of adolescence by throwing them into a world that combines Class S, a genre of sweet yuri romance, with horror. Now, what in the world could that strange combination be trying to tell us?

You wouldn’t normally put the two together, but it makes sense in context. Flip Flappers uses these two disparate story types to make a point, both about its characters and the conventions Class S represents, by developing Cocona and adding to her queer coming-of-age story while ultimately rejecting the tropes it’s paying homage to along the way.

To fully understand what the AniFem team called “the Yuri Hell episode” (a nickname inspired by this tweet) you need some background knowledge. Class S is a genre quite specific to Japanese media, focusing on young women (mostly middle- and high-schoolers) having deep, intimate friendships during adolescence. This genre stems from the idea that young people redirect the emotional energy that would normally manifest as romantic interest towards friendship. It also comes with the expectation that these relationships will end when the girls transition to adulthood (where that emotional energy will “naturally” channel back into heterosexual romantic love).

While it runs on similar “it’s just a phase” logic, it isn’t the same as the Western trope of young women “experimenting” in high school or college (leading to many a quirky one-note bi character), since that trope is generally steeped in sexuality and thrown in for shock, comedy, or titillation. Class S, on the other hand, is primarily about chaste emotional bonds that form the core of the story.

Nor is it the same as queerbaiting. Western fans have been (understandably) frustrated by series like Sound! Euphonium for not committing to the apparent queer romance at the center of the narrative, but the unfortunate truth is that these shows are part of a long tradition of Class S “love” stories where the characters are not expected to end up together. The “will they or won’t they?” teasing that usually defines queerbaiting may seem to exist at first glance, but the nature of Class S is that the answer is “of course they won’t” from the get-go.

Class S emerged in the early 20th century, mostly appearing in stories in girls’ magazines in the 1920s and ‘30s, though some have linked the rise in its popularity to the Takarazuka Revue, an all-women theatre troupe which debuted in 1914. Along with the success of women’s liberation and an emerging sense of “girls’ culture” in media, girls attending school was becoming the norm. All-girls boarding schools sprang up in great numbers between the 1900s and the 1930s and swiftly became the iconic setting for Class S stories marketed towards students.

In an isolated environment where all of their peers were other girls, it was perceived as only natural that deep relationships would develop there. Society at large apparently didn’t have too much of a problem with this. In fact, it was considered a good thing in some ways—mostly because these intimate friendships were considered “training wheel” relationships that would prepare the girls for marriage to men. It was a sign of immaturity if the girls maintained that sort of intimacy with each other past a certain age.

The ladylike all-girls boarding school, the deep emotional bond that’s somewhere between mutual crushing and supportive sisterhood, and the lack of romantic resolution or any identification of the characters as queer became staples of Class S, which in turn laid the groundwork for a lot of modern yuri. The relationships in Class S stories are almost always sweet, chaste, filled with pining and admiration, and with the backdrop of the refined and feminine school to set the scene and tone. Yuri scholar Erica Friedman calls this archetype Story A, the Ur example of the “romantic two-girl friendship” story that forms the foundation for so many tropes that still permeate Japanese media about girl/girl relationships, be they yuri manga or light novels.

This is the genre history that forms the dreamscape where Cocona and Papika find themselves in Episode Five of Flip Flappers, as the girls are transported to an old-fashioned boarding school that bears all the hallmarks of Class S. Their classes are all ladylike and dignified pursuits such as music and embroidery, the students dress in cute and modest uniforms, and there are no men or adults to be seen, leaving them in an isolated bubble of youth and femininity. There are also lilies absolutely everywhere—the flower that the yuri genre is named after and a long-standing symbol of love between women.

The longer the girls stay in this slice of Pure Illusion, the more Cocona and Papika begin falling into Class S behaviour themselves, complete with chaste but intimate snuggling (in pure white fluffy nightgowns, naturally), adorable hand-holding, and trope-tastic moments like Papika gently sucking on Cocona’s finger when she pricks it with a needle.

Gradually, you can see Cocona becoming more and more comfortable with this routine, settling into these patterns that repeat every day. Here, she can explore and live out a gentle and intimate relationship with Papika, as they drink endless cups of tea together and snuggle to their hearts’ content. It’s a magical no-place where the responsibilities and stresses of Cocona’s life at home can’t intrude, which is perhaps a deliberate play on the notion that yuri is “a fantasy world.”

But remember: this is also a horror setting. Their dainty classmates are all faceless and call out the high-class greeting “gokigenyou” in unsettling distorted voices. It’s always raining, and the halls and rooms of the school are constantly dark and claustrophobic. There’s an exceptionally creepy doll that watches Cocona sleep and apparently moves when no one is looking. And our heroes can never leave. Cocona and Papika’s first escape attempt ends with them seemingly dying, collapsed in the rain and covered in blood.

This nightmare-fuel dreamscape has hypnotised them and trapped them in a time loop where they would presumably have gone on doing needlework and tending to the lilies forever, never returning to the real world and never growing up. There’s even the implication (highlighted by their robot companion’s transformation) that eventually they would have lost their personhood and become part of the ghostly system themselves. As Dee wrote in her Episode 5 commentary, “Pure Illusion has all the trappings of a stereotypical ‘S’ boarding school, but instead of being a rose-colored haven, it’s a dark & stormy nightmare.”

Again, a genre about sweet and chaste relationships between schoolgirls and a genre that aims to frighten its characters and audience don’t initially seem like they’d mesh, but Flip Flappers artfully combines them to make a point. For one thing, the juxtaposition of the two genres goes a long way to contribute to the spookiness of the whole episode. But moreover, combining a Class S story with one about a horrifying time loop is a move that ultimately critiques the Class S genre and the outdated imprint it’s left on modern yuri.

After all, if Cocona and Papika are now the heroines of a Class S love story, it means their budding romantic relationship can only exist within the walls of the boarding school. Once they graduate, or are considered more mature, the expectation from society is that they’ll forget or set aside their feelings and move onto “real” relationships with men.

As well as it being just plain scary, you can read their failed first escape as the girls being punished—with a bloody end that evokes the Dead Lesbian trope, no less—if they attempt to take their relationship outside the confines of the school. They can maintain their sweet, intimate relationship, but only if time never moves forward.  Flip Flappers presents the idea that these girls and their love for each other can only exist within a certain repressed framework as a horror story, something the heroes need to flee from and fight against.

Cocona and Papika do escape, thankfully, fighting together to break the time loop and set each other free. Their defeat of Yuri Hell shows that, comfortable as Cocona initially was with the time loop’s routine, she’s recognised she wants more than what this world is offering. She wants a real future with Papika, not an eternity of chaste teenage crushing. It’s a major move for Cocona, who has thus far been defined by her anxiety about change and growing up, and it’s a big step forward on the road to her eventual romantic resolution with Papika.

Having broken free, their relationship can progress and they can work towards a happy ending that would have been denied them if they’d stayed stuck in the Class S world. The episode serves as both an homage to an influential genre of queer media in Japan (without which Flip Flappers might not exist) as well as a rejection of it. Flip Flappers makes the point that we can and should move on from this narrative, both in-story with Cocona rejecting and escaping from Yuri Hell, and in a meta sense by having an upfront wlw romance in the show itself.

Flip Flappers is a wild, psychedelic magical girl coming-of-age story that has a lot to say, and I think “Pure Echo” is the episode that most effectively combines the magical adventure with the metatext. It’s an artful use of borrowed genre conventions that not only creates an engaging and spooky story and progresses the character and relationship arcs, but ultimately sends a message of hope. Sometimes the world is a scary place that’s out to mould you a certain way, but you can break free and make a new future in spite of what decades of pop culture seems to say. It will take courage, but there’s a sunny world waiting for us all out there.

Alex Henderson is a writer and fledgling academic, currently working on a creative thesis about mythic archetypes and gender. She has reviewed books for magazines, been published in fiction anthologies, and applies her analytical brain to anime, superheroes, pop culture, and other fun things over on her blog The Afictionado. You can also find her attempting to be terribly witty on Twitter.