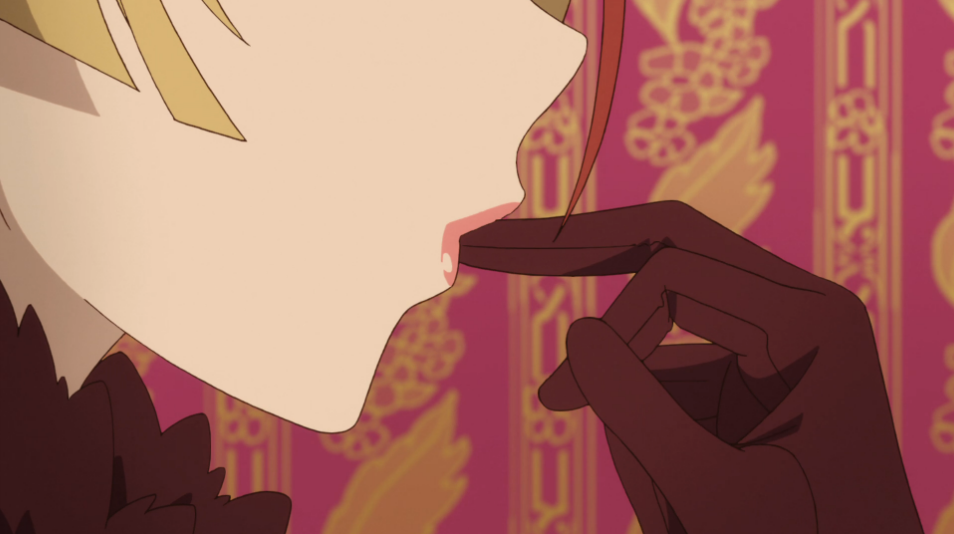 As Lauren recently illustrated, effective fanservice is about delivering on expectations. In a series that portrays itself as sexy, we can expect to see some skin without it seeming exploitative or out of place. The girls of Golden Boy flaunt their sexuality, the protagonist Kintaro seeks out that type of woman, so revealing clothes and sexual themes go hand-in-hand with both the story and the characterization of the women. Keijo!!!!!!!! features women enthusiastic about a sport where you knock each other over with your butts so it isn’t a surprise when someone gets a face full of bikini-clad booty.

One common element in both those examples, and all series that successfully employ fanservice, is consensuality. The women are opting into the activity, without being coerced, as an active participant. In essence, when fan service is fun, all parties involved are enjoying themselves.

Where Keijo!!!!!!!! has proven it is able to pull fan service off right, Izetta: The Last Witch has stumbled. The series had everything going for it, taking place in a fantastical historic setting reminiscent of the beloved romanticized visuals from Valkyria Chronicles, an excellent production staff, and a great premise.

Let’s be honest, a witch flying on a gun was one of those rare, forehead-slapping, “how could no one have thought of this yet?” ideas that still remained in anime. Putting fan service in what is supposed to be a serious representation of war, magic or no, is questionable by itself, but the major sticking point was the non-consensual nature of the fan service. This not only diminished Izetta, but was actively inimical to the tale it is attempting to tell.

Thematically the story of Izetta is relatively simple. Two young women and their bond of friendship (that’s what we’ll call it for now) can together save their beloved country from foreign invaders. The mutual trust and protectiveness between Izetta and Finé is the centerpiece of the story, as well as the respect and reverence the people of Eylstadt hold for each of them, the second coming of their historic savior the white witch and the next generation of Eylstadt’s royal line.

Investing the audience in their bond and building the people of Eylstadt’s reverence is key to a strong narrative. However successful they may have been, their work was almost surgically dismantled by a handful of directorial decisions and two short scenes.

Before we dig into specific scenes, let’s first take a broad look at the visual presentation of Izetta. The series attempts to paint a portrait of Europe in the midst of a war with the lives and livelihood of millions of people on the line, showing the audience tragic scenes of senseless death and soldiers weeping in their trenches. A frightened soldier awakens after mortar fire under the lifeless corpse of the officer who took the time to speak with him and calm his nerves; to have a crotch zoom and butt shot occurring mere minutes after is jarring.

Taking the time to create suggestive shots of Izetta’s position mounted on her rifle, or of her noticing the warmth of Finé’s breath while she is forced to send fighter pilots screaming into the sides of alpine mountains – this serves no purpose but to pull the audience out of the scene. Izetta isn’t trying to be sexy, she’s trying not to get killed, so the camera’s focus on her sexual features divorces the audience from the sense of danger in combat.

Outside of the visual incongruity during combat, we have to consider Izetta’s role as an inspirational figure for the people of Eylstadt, perhaps one of the most interesting aspects of the story going into the series. Finé and her propagandist work to use Izetta not only as a literal weapon but also as a psychological one, by leveraging the reputation of the nation’s legendary savior, the white witch. In addition to striking fear into the Germanian troops, this should afford Izetta a certain amount of reverence among the people of Eylstadt, but that simply isn’t the way she is treated in the anime.

One of Izetta’s first interactions with the royal servants includes a maid, Lotte, someone who should be treating her with respect for a long list of reasons. She’s a maid, Izetta’s a royal guest, Izetta has strange magical powers Lotte doesn’t understand, and, as she goes so far to state herself, she feels gratitude to Izetta for saving her beloved princess and some of her own relatives in a recent battle.

Is any of this expressed in their interactions? No. Lotte tricks Izetta into lifting her arms so she can suddenly pull off Izetta’s nightgown and expose her in front of Bianca, the captain of the royal guard.

Ostensibly this scene is supposed to be humorous, which is rather disturbing in itself. Izetta screams, crouches down, and does her best to cover herself, with tears in her eyes. Bianca looks on in awkward sympathy but takes no action to help Izetta or discipline Lotte, who seems entertained by the scene she’s just created.

We’re being asked to laugh at a crying girl who has just been exposed in front of total strangers. Whether or not you believe there is anything wrong with that, the event establishes that the maid experiences no awe, fear, or respect in the presence of Izetta, directly contradicting the role she is supposed to occupy in the story.

Later on, an even worse scenario plays out to commit the same act of narrative sabotage as before. In a meeting, their journalist-turned-propagandist Ervira decides she needs to take Izetta’s “measurements” by literally groping her entire body, finishing off her act of sexual assault by tasting the fingers that had touched Izetta’s body. Izetta makes noises of protest during the act and again ends up on the floor crying after being molested. All the while, Finé looks on uncomfortably and apologizes to Izetta as if being molested was an inconvenience.

She definitely doesn’t think of it that way though. When Ervira informes Finé that it’s her turn, the scene ends with a prolonged shot of a traumatized Izetta crying on the floor and the sound of Finé screaming and being chased around the room. Once again, the expectation is that the audience will laugh at this.

Ridiculous? Sure. Uncomfortable? Definitely. But the scene also told us that Finé, the woman soon to be inaugurated as the new ruler of Eylstadt in a time of war, can’t even control the subjects in her own palace.

After investing no small amount of time and effort into developing the emotional connection and protectiveness Izetta and Finé feel toward each other, Finé is presented with an opportunity to both take command and take action in Izetta’s defense. Instead, she looks on. Then she herself is molested. Imagine how that scene might have played out if it were a man doing the groping, or an enemy?

Rather than being swiftly executed for assaulting royalty, Ervira goes on to become their PR manager, and dresses Izetta in an outfit that shows a profound lack of consideration for the needs of combat and the concept of chafing.

Within the context of the story, Izetta’s fan service is absolutely incongruous with the setting and in direct conflict with the building narrative. Izetta and Finé’s roles as heroes are undermined by the fact that they are unable to address harassment they suffer at the hands of their subordinates and closest confidants. The sense of danger of battle and the stakes of the greater conflict are diminished by the expectation that it is just another vehicle for titillating shots. Izetta’s use of non-consensual contact as fan service not only harms the story they are trying to tell, but could have real life consequences as well.

Sexual assault is a difficult theme to responsibly incorporate into any story, but including it in a misguided attempt at comedy or titillation only serves to alienate a large portion of the audience (not least women who have ever experienced sexual assault, which is a lot of women) and send a destructive message. Presenting non-consensual contact as fanservice relies on, and contributes to, the normalization of making unwanted contact with a woman and ignoring or even desiring a negative reaction from them. Encouraging viewers to laugh at the struggles and emotional trauma resulting from the undesired sexual contact tells us that their objections and feelings aren’t worth consideration. That’s a tough message to ignore.

Not sure where to start? Some questions to kick-start conversation:

Our Patreon is doing well, but not earning enough yet to be able to pay everyone for their work in creating and editing four posts per week. If you appreciate our content and would like all writers and editors to be compensated fairly for their time, effort and expertise, please become a patron for as little as $1 a month!

Peter has been an anime fan for 20 years and a professional writer working in anime, video games, and esports for five years. You can follow him on Twitter @peterfobian. His posts represent the independent views of the author, with no connection to his employer.