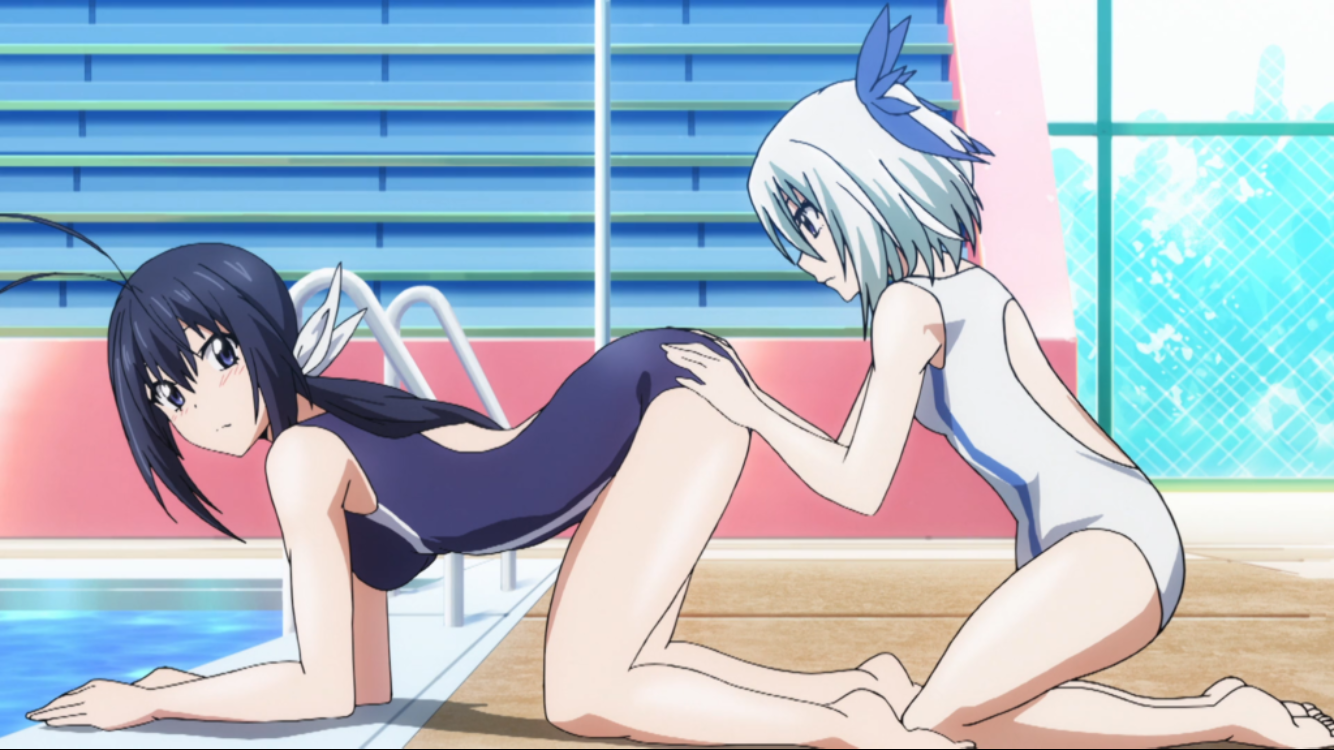 There’s a misconception that feminists believe any and all fan service is always bad. But in this feminist’s opinion, fan service goes wrong when it interrupts the mood of the show.

Take Keijo!!!!!!!!, my guilty pleasure of this anime season, in which girls don skimpy swimsuits, study “asstronomy,” and use their ample buttocks to knock each other out. I love comedies and over-the-top action, and I knew instantly that I’d find this entire premise hilarious. I love that Keijo!!!!!!!! knows itself. It knows exactly why we’re watching and doesn’t try to be anything else.

Sometimes fan service, defined here as the act of giving the fans exactly what they want, hits the mark. Keijo!!!!!!!! is one of those instances, dishing out exactly what it promised. The same goes for Free!, which advertises—and delivers—on plenty of male skin. And for an example of how fan service isn’t always sexual, let’s bring up a truly wild mecha anime, GaoGaiGar, which is undeniably gratuitous with its slick giant robot battles and rewarding explosions.

Meanwhile, I was extremely put off by certain parts of God Eater. This video game series turned anime is known for its unusual, beastial enemy designs, its post-apocalyptic futurescape, and its stunning, almost painterly art. So I was extremely bothered by the anime’s constant visual focus on some female characters’ breasts. Major Amamiya is portrayed in the games and parts of the show as a competent leader and combatant, but we see more of her breasts than her face. I’m not saying that strong women can’t be sexy, but it seems as if the show is undercutting itself, leaving me pondering its jarring camera angles instead of immersing myself in its story. “Wait, didn’t you just say you liked Monster Musume, which was full of boobs?” Yes, but have we considered that there’s a time and a place for boobs, and a serious war drama isn’t it?

When I use the term “fan service” in a derogatory way, it’s not because I hate fan service, far from it! It’s because I am critiquing the creator’s understanding of what type of content actual serves fans of a show. When the girls of Keijo!!!!!!!! flaunt their considerable assets, it’s totally in line with the story. But when an otherwise serious show suddenly points the camera at a female character’s panties, it’s saying several unfortunate things:

Imagine you’re watching Dragon Ball Z. Goku is launching into his Kamehameha attack and the camera goes closer, closer… until it lines right up at his crotch. To me, that would say “Fans, we realize this is a real yawn, so let’s throw in some sex appeal to spice things up.” This would be ridiculous because it would intentionally pull viewers out of the story. It would be ridiculous because Dragon Ball Z already HAS fan service—depicting the craziest attacks possible. Adding gratuitous sexuality on top of that would just take away from that.

Fan service can often be the product of sloppy storytelling: give the fans what they think they want in order to compensate against larger issues. Not all fan service is bad. But the fan service that works for one show isn’t going to serve the fans of another.

If I turn on Gundam, I want to see some robot explosions, complete with twisted metal carnage. And if I turn on Keijo!!!!!!!! and don’t see a “Butt Guillotine,” I’m going to be disappointed. Giving fans what they want is awesome. The problem is creators often don’t know what that is.

This may seem like a surprising proposal from a Monster Musume fan, but it’s time for anime to stop relying on fan service as an all-purpose Band-Aid. It simply doesn’t work in every show. For me, the shower scenes in Izetta the Last Witch feel as out of place as if the characters in Yuri!!! On Ice punctuated their skating routines with Michael Bay style explosions. For fan service to be successful, it has to align with the audience’s expectations.

What is a show advertising in its promos, its  opening credits, its first episode? Did we come to the show for a space opera and get butts instead? Did we come for butts and get a straight-laced period drama? Part of the reason AniFem exists is because there’s very little you can do to verify the absence of fan service other than watch the show, so some of the reviews here attempt to remedy that by warning fans in advance. That shouldn’t have to be the case! Certain art styles and storytelling cues should be enough to let us know who a show is for, and who is going to be completely put off by surprise fanservice.

Of course, this means admitting that not every anime show has something for everyone—and being OK with that. I’d rather see shows go all out to please their intended audiences than dilute themselves for a chance at a wider one, especially by using fan service aimed specifically at just a portion of viewers who may or may not be in that audience.

Give us our boobs, butts, and blow-outs, but signal them in the stories first. That way those of us who like that kind of thing can gravitate to it, and those of us who’d rather go without that type of fanservice can find other shows to watch. Otherwise it’s less likely to be a welcome surprise than an unpleasant one.

Articles like this challenge the narrative of what feminists and allies want from anime. We have article like this in the works for other topics – of course, including moe. However, we have a lot of great content lined up and only enough funding for two articles a week; if you would like to see posts like this more often, please become a patron for as little as $1 a month!

Lauren Orsini is a writer, blogger, and anime reviewer. She writes about geek careers at Otaku Journalist. Her latest project, Anime Origin Stories, is an oral history of anime fandom.