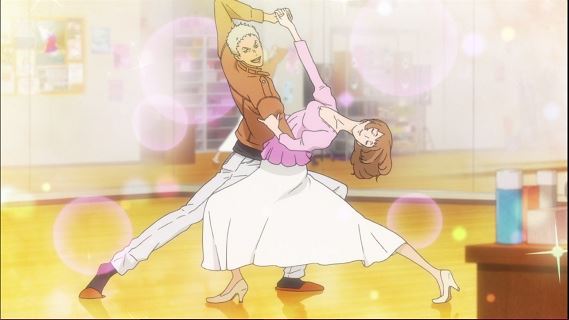 Feckless high school student Tatara Fujita wants to be good at something – anything. Unfortunately, he’s about as average as a slouchy teen can be. The local bullies know this, and make it a habit to hit him up for cash, but all that changes when the debonair Kaname Sengoku sends them packing. Sengoku’s not the neighborhood watch, though. He’s a professional ballroom dancer. And once Tatara Fujita gets pulled into the world of the ballroom, his life will never be the same.

In a shocking turn of events, the most highly anticipated anime of the summer season is real good. There’s not a lot of competition for Best in Show so far, mind, except for maybe Made in Abyss (if it can avoid the worst excesses of its source material). But Ballroom is more than that. It has the vibrant promise of an all-time great.

I spent a considerable amount of time watching this with comparisons running in the back of my head. Here is the appreciation for the hard work involved in an artistic pursuit and grounded coming-of-age reminiscent of Paradise Kiss; there’s the vibrant pop of passion and magnetism in the brief dance scenes in the vein of Kids on the Slope’s jam sessions; at the center of the story is an impassioned student looking for purpose in a niche art form a la Showa Genroku Rakugo Shinju. All good company, and all true—but not the whole of it.

This is just a beautifully made premiere, strongly paced to give us a clear sense of the central figures and our protagonist’s conflict. Fujita’s desperate for something to throw himself into, but the episode makes it clear that dance isn’t just the first convenient thing to come along. It conveys a sense of purposeful movement, self-confidence, and a desire to be seen that appeals to the shy junior high student. While the dancers’ bodies occasionally feel a bit eldritch as limbs stretch impossibly long distances across the camera, that somewhat hallmark trait of Production I.G. winds up fitting rather well as we see them through Fujita’s awestruck eyes.

There are a few growing pains in this premiere that feel like necessary acknowledgements. There’s much hay made on Fujita’s first visit about how learning to dance means he’ll get to touch gurrrrrrrrrls, and he’s clearly flustered by his intensely focused classmate Shizuku. But that’s true enough to life, and there’s already a strong sense that the women in this show have their own ambitions and distinct characters (the ending credits even seem to promise at least a few varied body types). Shizuku herself is minimally present, given that this is Fujita’s introduction to dance, but I look forward to getting to know her.

It’s decidedly harder to talk about good anime without sounding like a broken record. The characters have charm and promise, the designs are grounded but distinct, the show clearly plans to go all out on the competition visuals in a similar vein to Yuri!!! on ICE, and it conveys the beauty and backbreaking work of an art form I personally love very much. It….it’s good. Thumbs up.

My only point of concern is that the manga is still ongoing, meaning this adaptation will have to either pick a stopping point midway through its characters’ journeys (which can be death for a character-driven show like this) or decide on an anime-only conclusion (the largest gamble that almost never pays off). Still, that’s a gamble I’m willing to take, especially with a roomy 24 episodes to grow an ensemble cast and emotional payoff. Get hold of it if you can.

(Which may be difficult because, y’know, Strike is still the worst. I just feel obligated to include this concrete fact somewhere in the body of every relevant review. Their name is deservedly mud, and getting worse because this makes three for three of the shows I’ve loved thus far locked behind their double paywall nonsense.)