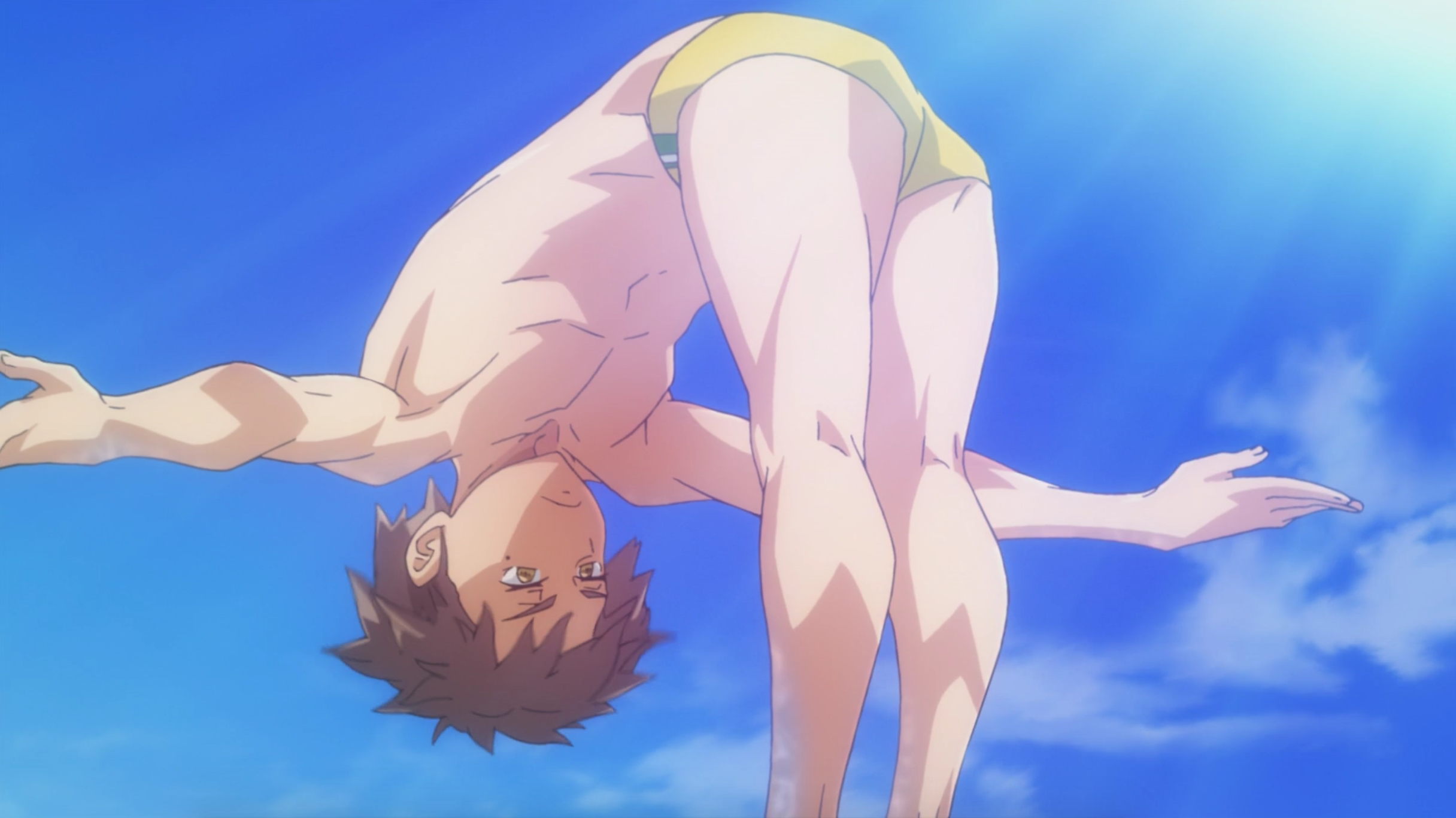 Since he was a young boy, Tomoki Sakai has been in love with the sport of diving. After years of practice and stalwart determination, there’s no place where he feels more at home than in those brief seconds of flight before he’s submerged into the water. Unfortunately, he and the other boys of the Muzuki Diving Club (MDC) aren’t doing enough to please their sponsors, and the club is on the verge of being disbanded. Enter coach Kayoko Asaki, a fiery woman who is determined to pull the boys of the MDC back from the brink. Her mission: get the MDC to the Tokyo Olympics in one year’s time. Tomoki and his friends have a long road ahead of them as they begin their fight to fulfill their dreams.

Y’all, I promise I did my best to watch this premiere without comparing it relentlessly to Free!. I swear. It’s just that the show wants me to make that comparison, is the thing.

“You like exclamation points?” DIVE!! asked. “Yo, we got two of them!”

“You like them muscle boys in swim suits? Ours are all wearing speedos, and they look much younger so you can feel twice as much like a creep (but don’t worry, we ab’d ‘em up in the ED because we know what you’re here for)!”

“You want a quiet dark-haired boy who’s obsessed with pools? Ours is also a shitty boyfriend!”

“You want a sad scene in a closed version of the pool? Ours is outside in the rain!”

“We have so many abs. Like ten abs. MORE ABS THAN YOU COULD EVER WANT.”

On and on and on. I desperately wanted this series to do well, because it’s one of only two series this season with female directors (and my crystal ball tells me I’m not gonna be so hot on the other one, either). Unfortunately, it’s overwhelmed with a “me too!” feeling that the premiere never really manages to shake, despite the fact that the novels the anime was based on (also penned by a woman) were published almost 20 years ago. It doesn’t help that the stakes of the episode pivot sharply in the final seconds, going from “we’re afraid our club is going to be closed down” to “we’re training for the Tokyo Olympics!” It’s a shift that feels as if it should’ve been allowed more room to breathe.

Likewise, not-Haru’s passion for diving is…well, it’s not Haru. Free! might be ridiculously over-the-top, but it always reveled in that fact with obvious joy, while DIVE!! strives for those same beats of devoting your life to a sport without the same passion. It undershoots its mark, winding up more in the general realm of “shy kid learns to believe in himself,” which itself is something we’ve already seen several times this season alone.

There is also this truly breathtaking moment of bad exposition:

(Not-Haru’s name is Tomoki. I went back and looked it up, because I am a professional.)

There are two unique glints of potential in this premiere. The first involves Tomoki’s girlfriend, whom I tried very hard not to think of as the No Homo Buffer, given all the other ways this show has been “Free! but less capably executed.” Tomoki spends most of the episode being a total jerk to her, ignoring and eventually avoiding her because his mind is on the club and his senpai.

To my surprise, the end of the episode actually addresses this, with Tomoki confessing to himself that he only accepted her confession because, basically, it was the easiest thing to do. That brief hint of self-reflection, when the show could easily have cast her as a simple roadblock to True Manly Passion for wanting his time and attention, is at the very least interesting. Whether they decide to do anything meaningful with it remains to be seen (I spent a moment wondering if he would wind up realizing he likes his senpai instead before remembering the golden rule: “no overt queerness allowed outside the BL sub-genre”).

The other bit of promise is with said senpai (fine, his name is Yoichi), who’s clearly under enormous pressure as the sole riding hope for the club in this premiere. Having him fall off that pedestal might prove an intriguing development. The other club members are pretty bland, though we are subjected to a long plot cul-de-sac where the femme-coded club member insists he saw their coach having an affair. It. Exists.

Beyond that? Uh….the animation is serviceable with some very nice still images, though the water effects will never effectively go toe-to-toe with KyoAni. Tomoki has a real cute dog. And none of this matters much anyway, because you can all rewatch Free! for…free….on Crunchyroll while DIVE!! is locked behind Amazon’s double paywall. Sorry about that.

[Hey Strike, your subtitles are large and obtrusive and your player is very hard to take screenshots with. Kindly suck on a lemon. —This has been the individual reviewer’s opinion.]