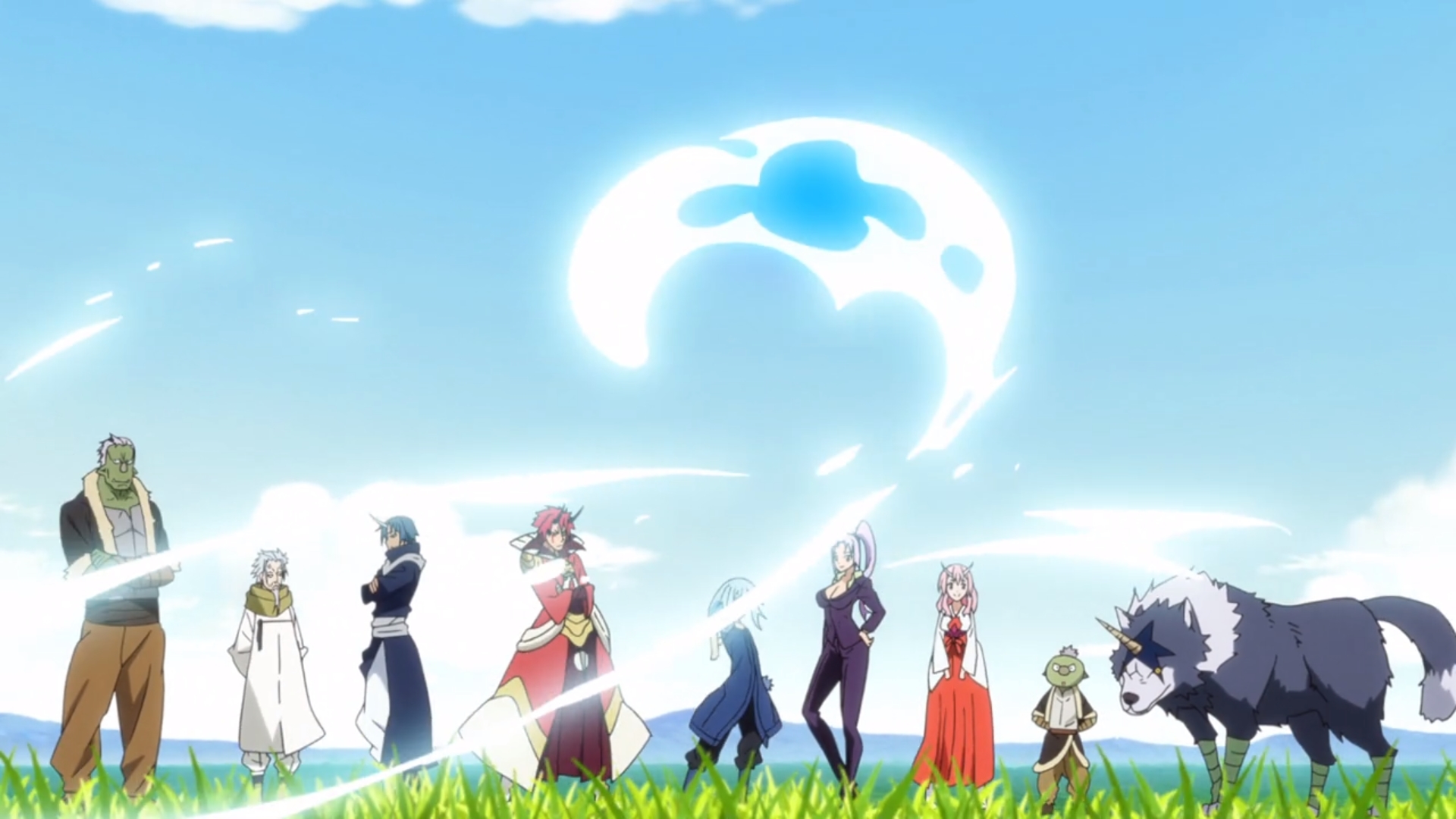 What is it about? Satoru, a 37-year-old salaryman, has found contentment in his routine, ordinary life. Sure, he’s never had a girlfriend, but he’s fine with that too. That ordinary, contented life comes to an abrupt halt when he becomes the victim of a random stabbing. As his life slips away from him, a voice in his head lists off abilities he’s acquired and finds him a new shape that will fit those in his new life – that of a slime in a fantasy world.

The bar for isekai anime has gotten lower and lower over the years. With each passing season, the genre seems to reach new depths, from harem antics to ridiculously overpowered protagonists to the normalization of slavery. Recent series like How NOT to Summon a Demon Lord and Death March to the Parallel World Adventure make the generally-inoffensive nature of That Time I Got Reincarnated as a Slime feel refreshing and innovative.

After all, there’s not too much a slime can do. Sure, they’re annoying as hell to fight in RPGs. Satoru ended up as one because he gained abilities based on the thoughts and sensations of his dying body – too hot, too cold, in pain – and it led to a form that was extremely resistant to damage – and what’s more resistant to damage than a slime? But they’re just kind of cute little gelatinous blobs that occasionally try to engulf and digest you.

That Time I Got Reincarnated as a Slime certainly leans into that idea, too. Slime-toru, instead of the adult male voice of his former human body, has a cute, childlike voice as he internally narrates rolling around absorbing magical flowers. His slime face is generally expressionless, but occasionally forms features like a shocked face or a little popping vein. The first other sentient being he encounters is a tsundere dragon who has been sealed for 300 years. And, entirely to the writing’s credit, he responds to the idea of a summoned creature being bound to its summoner with horror rather than being totally cool with what is essentially a form of slavery.

This cuteness contrasts with the first half of the episode, including Satoru’s death scene. While most isekai tend to offer their protagonists quick, painless deaths – being hit by a truck offscreen seems to be a favorite – Satoru’s stabbing and subsequent bleeding out is graphic and bleak. It takes time to die of blood loss, giving him plenty of time to contemplate how much pain he’s in and all the things he wanted to do. Blood pours from his wound and his nose, forming a dark pool under him as his coworker calls, too late, for an ambulance. A clinical female voice, marked by kanji descriptions and psychedelic shifting colors, punctuates his internal monologue as his consciousness fades.

He does think to ask his younger coworker to wipe his hard drive – this show definitely has some gallows humor.

For all of its inoffensiveness, That Time I Got Reincarnated as a Slime has one moment that I must point out. Although he claimed not to have minded being a virgin, one of his dying thoughts is that in his next life, he’ll “screw every girl he sees,” which unlocks the “Predator” ability. The ability has nothing to do with screwing girls, but means he can absorb things and turn them into useful items.

Even if it’s a device to give him a useful ability, it comes at the cost of a rape joke. It adds a threatening note to his character and, considering there’s probably a harem aspect to the upcoming episodes, marks him as a potential threat to his future female compatriots. Even if it was just a one-off joke, it treats sexual assault as a subject for light humor.

Hopefully, that single line doesn’t indicate any further direction for the story. That Time I Got Reincarnated as a Slime is a perfectly decent, fun show for fans of isekai with very little of the bullshit the genre has come to be associated with.