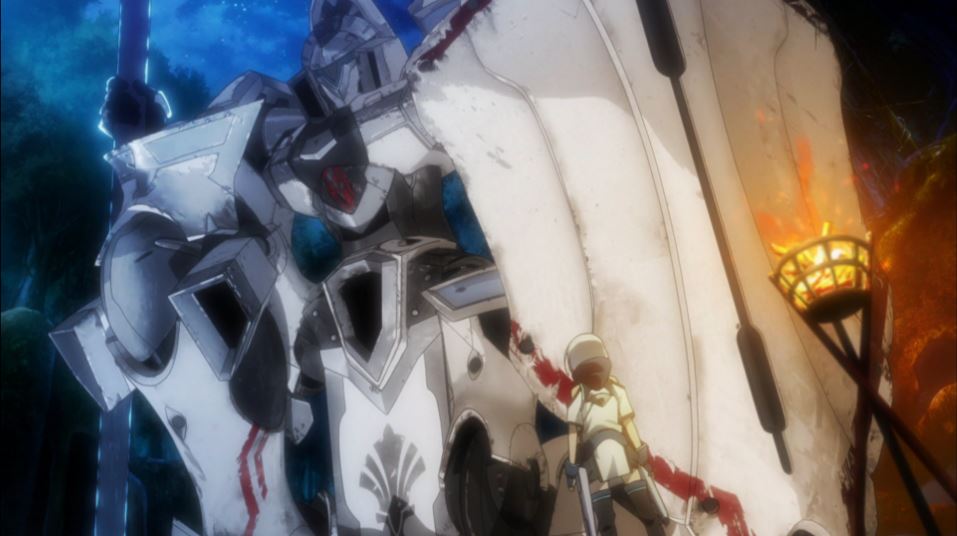 A Japanese mecha otaku dies in a car accident and his soul is reincarnated into another world as Ernesti Echevarria. Eru inherits memories and interests from his previous life, and aims to be a pilot of a Silhouette Knight, a large humanoid weapon that really exists in his world.

It’s been twenty-four minutes, and I’m still waiting for Knight’s & Magic to do something meaningful with its hook. The credits have rolled, and I am still waiting. I may indeed be waiting forever, because I don’t think I’m going to watch another episode.

First, let me be fair: there is nothing egregiously wrong with this premiere. It has nice enough character designs – though most besides the protagonist are rather flatly colored – and the backgrounds are downright breathtaking. There are also multiple fight scenes with generic but well-executed monster designs and some nicely fluid animation, though who knows if that will remain consistent in episodes to come. As fantasy stories go, this one is quite pretty to look at thus far. The characters aren’t even loathsome or anything. Ernesti is a loyal friend in addition to his robot fixation, and his earnestness keeps him from being impossibly obnoxious. Nobody else is nearly as fleshed out a character, though, and that could be a problem. There could be many problems.

What leaves me uneasy is the knowledge that this series is based on a light novel. Even that’s not an inherent evil, but it puts a person on guard for several warning signs…and this premiere displays just about all of them.

The premise, as I said, isn’t given much in the way of serious consideration. There’s a prologue that’s just long enough to kill our protagonist off (wherein his voice is an alarmingly poor fit to his design), and then a second prologue immediately after in which he wakes up as a child in the new world. The fact that Ernesti is a reincarnated otaku, in practice, means that the story has a built-in reason for him to be the usual light novel prodigy and serves as a reason why he’s obsessed with the “Silhouette Knights” aka giant robots. Ernesti complains about being too small to be a pilot, but there’s no examination of what it’s like for an adult to find himself a child again, or the lingering weirdness of having this mental adult pal around with two young kids.

What it does have plenty of time to do is inform us about how great Ernesti is, from coworkers in his former life remarking that they’d follow him anywhere to other magic students gaping at his quick progress to the very narration informing us that he’ll grow up to be a great man who changes the world. We get it, he’s swell.

The narration in general is clumsy and ill-delivered, tasked with giving us a lot of almost storybook exposition rather than just letting the story breathe on its own. There’s also a general carelessness to that worldbuilding. In the same way that Ernesti being a reincarnation is functionally just a means of justifying his genius, there are several places where the episode gets lazy and starts leaning on standard anime tropes. Ernesti invents a gunsword, for example, because he’s too ultra-special to just use the same regular casting rod as everyone else (read: it will look cool in action scenes). And there’s a student council president. Why is there a student council president, nay, a student council, in this fantasy military academy? Dunno, don’t care, show wanted one.

Which leads to the loudest bell of all: this premiere has exactly four female characters that show up on screen. One is Ernesti’s mother, who has maybe two minutes of screen time. One is a high school Knight Runner with extremely prominent and shiny cleavage who has a couple lines and may be important later; Addy is one of the siblings who becomes a “lifelong friend” of Ernesti’s, and whose characterization in this episode consists solely of fawning on him and then becoming jealous when her half-sister (said student council president) also shows signs of interest upon first meeting.

So, we have a mother figure, a sexualized teen (the twelve-year-olds, at least, aren’t victim to any sleazy framing), and the first two parts of what may or may not become a light novel harem (since they are presently twelve but will presumably grow to adulthood). This does not bode well. Knight’s & Magic, despite its stupidly punctuated title, has the bones of a standard but well-done fantasy series, but it seems to have the tainted meat of LN wish fulfillment, and all the troubles therein, hanging from it too.