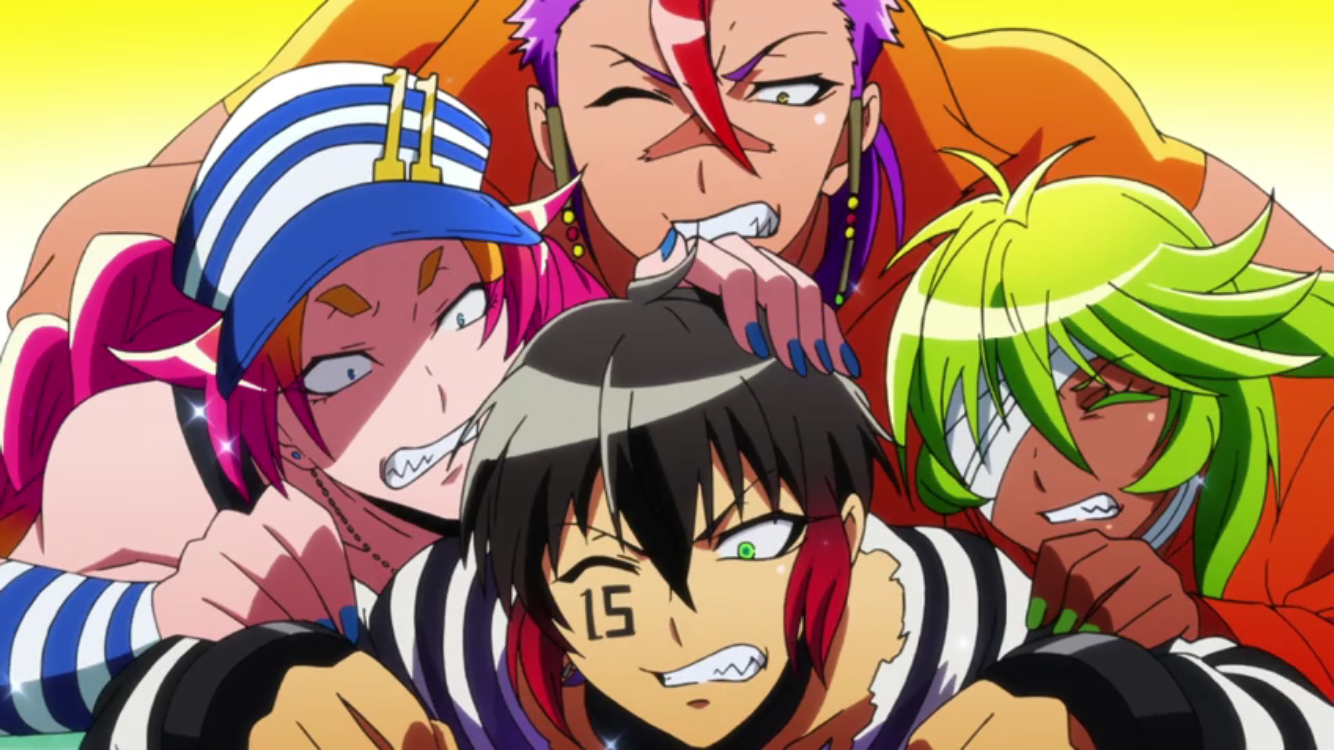 Four quirky criminals have managed to break out of prisons around the world, but now they’re locked in a cell together in a prison that prides itself on a perfect record of no escapes. This doesn’t faze the foursome, who enjoy their life of air-conditioning, good food and internet access. Still, they are professional escape artists, so they slip out of their cells whenever they fancy it and make a bid for freedom whenever they can – not an easy task when the prison is crammed full of booby traps and enthusiastic guards.

Nanbaka is fast-paced and chock-full of jokes, some more ridiculous than others. It took me a while to adjust to just how surreal and comical the prison is (my last experience with prison on TV: Orange is the New Black), but anime ditches any sense of realism for comedy’s sake all the time, with school settings in particular; once I framed it like that I could reset my expectations and enjoy the show more.

The funniest parts are probably their interactions with the guards, who range from friendly sidekicks to grumpy straight-men, frustrated with this group of fools who just won’t stay in their cell. The four of them are a pretty likeable bunch of criminals, and their interactions with each other were confident and relaxed. There’s some decent comedy voice acting going on, which probably saves half the jokes.

It goes to some familiar wells. There is one moment where a character decides he’ll pretend to be interested in men in order to be more attractive to women, which is a pretty spectacular distance from the reality of bisexual men. It seems to be a four-panel comic throwaway joke and quickly left behind, but if it turns into this character’s schtick that could be all kinds of unfunny to watch. They also do a pretty lazy cross-dressing joke, not sure yet how – or if – they’ll develop that.

I’m not sure how much of anything will develop yet; it’s a really inconsistent episode. The first half is an extended chase sequence, then the opening credits, then a bunch of four-panel gag comedy. The last five minutes shift substantially, introducing some serious plot, characterisation and stylistic variation. It doesn’t feel like a twist or a gamechanger though, more like they’re throwing everything at the wall and episode two will reveal what stuck.