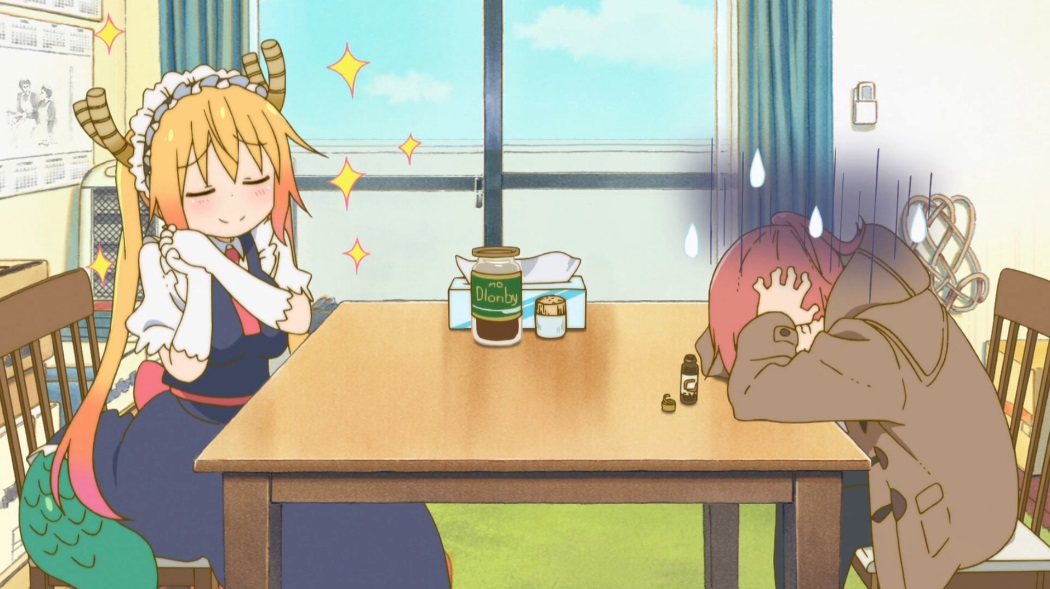 Miss Kobayashi, a developer, wakes up one morning to discover she invited a dragon to come and live with her as a maid while blind drunk the night before. The dragon, Tohru, can either appear as full dragon or mostly human with just a hefty dragon tail behind her, and must adapt to such human customs as “washing laundry without using your own saliva” or “cooking something other than your own tail”.

I really, really enjoyed this show. It was headed straight for my top three of the season – until I hit one scene, which is so problematic I need to break it down in detail.

SPOILERS: detailed discussion of scenes and moments from the first episode

Let me start with the good stuff, because I really did enjoy it and I want you to be informed about its worst moments without necessarily being put off by them. The fact is that this is a rare anime starring a working adult woman. Not only is she a working adult, she’s a white collar professional with a sought-after skill set in a male-dominated industry. The only comparable character this season so far is in ACCA, and currently a minor character only.

Kobayashi is a rare character aesthetically too. She wears men’s clothes, is treated as “one of the guys” by her coworkers and is voiced by an actor who obviously gets a lot of work playing male characters. Her character design is not cute. It’s not sexy. She doesn’t work in customer service, and you get the impression she wouldn’t be very good at it even if she did. This is a very, very unusual protagonist in anything, but particularly in anime.

Kobayashi reads as masculine, but not gentlemanly. She immediately takes Tohru up on her offer of becoming a maid and tests her against Victorian maid standards, which Tohru tackles with enthusiasm and fails immediately every time. I love that she doesn’t fail for incompetence, but for misguided zeal. When Kobayashi asks her to do laundry she doesn’t get confused or overwhelmed by washing machines, she just insists that her saliva does a better job. A lot of the humour comes from Tohru, who looks very feminine, doing something completely disgusting because to a dragon it would be the most common sense option.

From this confidence she tells Kobayashi early on that she is in love with her, clarifying that she means this sexually. Kobayashi is unimpressed, reminds her that she is a woman. Tohru says that Kobayashi saved her and she wants to repay the favour with her entire body, offering to carry Kobayashi to work in her dragon form. So it’s rushed past pretty quickly in that exchange, but in the rest of the episode Tohru thinks of Kobayashi as a crush would.

There is a chance that this could actually go somewhere. In the closing moments of the episode the two fall asleep in bed together, something for which Kobayashi gives explicit consent, and Tohru has a bad dream. Only it’s more likely not a dream but a memory, of being run through in a battle. She wakes up upset, and Kobayashi notices, saying a few words which calm her down. It was an unexpected moment of emotional connection after solid comedy, suggesting this series won’t be all gags all the time. It looks like this show will give me the more substantial and linear story plus more situation-specific jokes which would have made Gabriel DropOut more engaging for me.

There is one scene which I thought was hilarious, and was screencapping every exchange – until it hit the moment where a drunk Kobayashi forcibly removes Tohru’s clothes and berates her while she is naked. Her tipsy male coworker is also in the room, though avoiding looking at Tohru. “Acting embarrassed when you’re stripped is part of proper behaviour!” Kobayashi yells at her until Tohru tears up, scared.

I would have put this show in my top three, right up there with season stand-out Interviews with Monster Girls. Sadly, this interaction completely ruined that.

The other thing I need to mention is some low level fanservice around Tohru’s chest, which is large, perky and prone to Gainaxing. It wasn’t frequent or overtly male gazey enough to put me off when I thoroughly enjoyed so many other elements, but I understand if others find it eyeroll-worthy.

Actually, a great deal of this episode would have been eyeroll-worthy had everything been exactly the same but Kobayashi been a man. It makes me wonder if the manga artist originally drew her as a man then genderswapped her for whatever reason. Either way, it makes for a refreshing protagonist and a potential couple of the year. I absolutely hated the stripping, but I absolutely loved the rest of the scene it’s in. I want so badly to enthusiastically recommend this, but it has to be with a pretty huge caveat.

Let us know what you thought of the show in comments below! Please read our comments policy before joining the conversation and contact us if you have any problems.