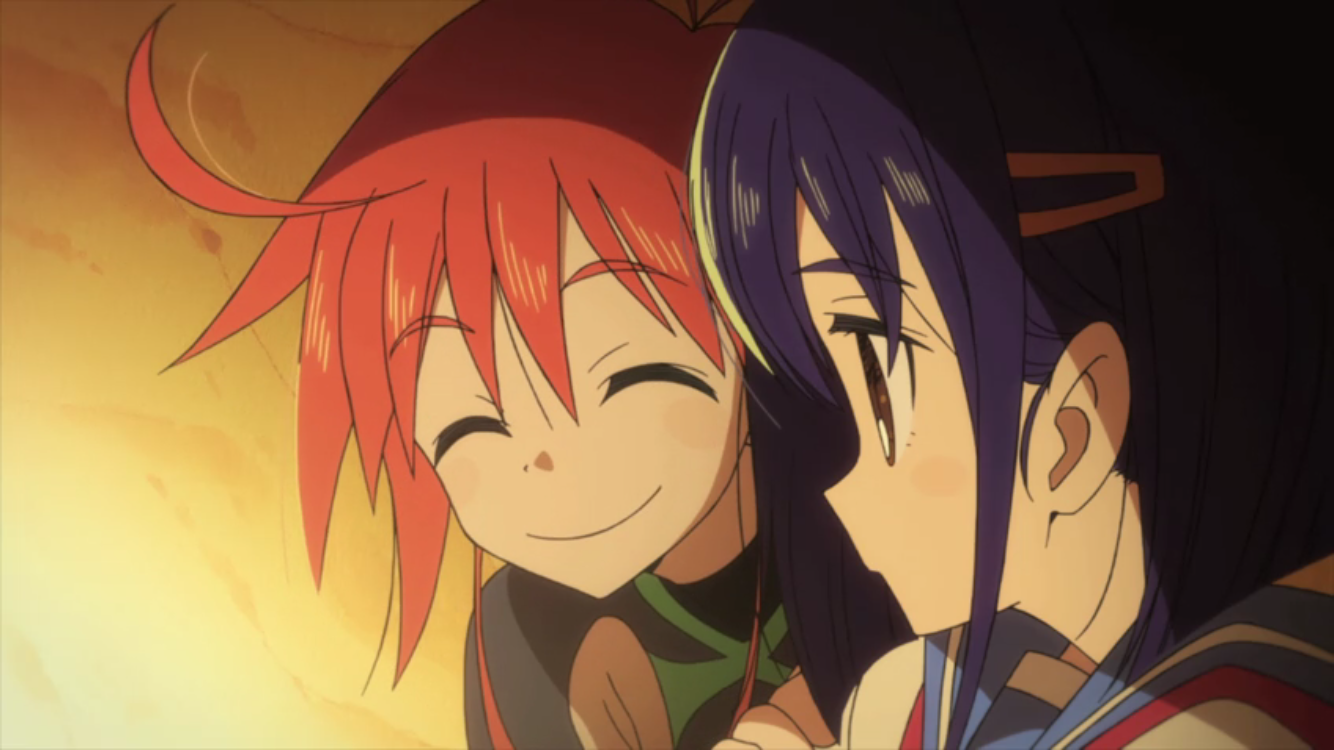 Cocona is a middle school student who is struggling to decide where to go to high school. One day she is dragged away from those troubles into a place she doesn’t recognise, with no-one but a robot and a strange girl in strange clothes who flies through the air on a surfboard and tells Cocona she has been expecting her.

FLIP FLAPPERS is consciously a fairytale story – the closing credits are a lovely, nostalgic retelling of Hansel and Gretel – and so far plays more in metaphor than narrative. Comparisons to Alice in Wonderland are inevitable, as Cocona is almost literally pulled down a rabbit hole. However, where Alice is isolated in a world of lots of rules but little sense, the world Cocona arrives in is soft and sweet, with a beaming companion who seems to cherish her without even knowing her. Cocona’s isolation comes in school earlier in the episode, as she stands unsmiling and lost in thought while her classmates laugh and talk around her. Unlike Alice, Cocona leaves her world of order and finds human warmth and connection.

It is undeniably beautiful, and the aesthetics have something of a nostalgic quality. The way eyes are drawn feels almost sketched, in a way that feels gentle and dynamic. Both content and aesthetics are very influenced by both Studio Ghibli and Mamoru Hosoda, with shades of My Neighbour Totoro, Whisper of the Heart and The Girl Who Leapt Through Time in particular. The story is told very cinematically too, with a lot of show and very little tell; this could easily have been the first 20 minutes of a film, and the kind of film that would get critical acclaim and a western release at that.

Two red flags were raised for me, though neither a big enough problem yet to be a dealbreaker. The first is the girl Papika’s outfit, which seems to be bikini briefs and a bodysuit with cutouts on the inner thigh (chafing isn’t an issue in her world, apparently). Papika is presented as a child and there is so far zero fanservice in this show, but the outfit could be repurposed for fanservice on a different character, which makes me very slightly wary.

The other red flag is more of a problem. There is a scene in which Papika’s robot switches to “Touch” mode, restraining the two of them and trying to lift Cocona’s skirt and reach between her thighs as she screams “No!” with tears in her eyes. Later events in the episode suggest there is a story justification for that, but you know what? The female writers of Chobits created a story justification for their chapter one crotch groping too and it still felt exploitative and creepy. And that was on a shut-down robot! This is a girl who is at most 15 years old and visibly distressed by the invasion. If there is a story justification that means this kind of thing could come up again, potentially played for comic value and/or titillation.

That said, this is framed like a shojo-ai story, with Papika, immediately behaving as if she is intimate friends with Cocona, who is (understandably) resistant and distrustful. There is some backstory with Papika needing to find someone who is essentially drift compatible for some purpose, not yet revealed, and any relationship they have looks to be one of drawing strength from and supporting one another. As things stand Papika’s character is something of a manic pixie dream girl, so she will need more fleshing out to match Cocona, who is already a decently sketched character by the end of episode one. However, played right this could be a beautiful, rewarding and confidently queer story.