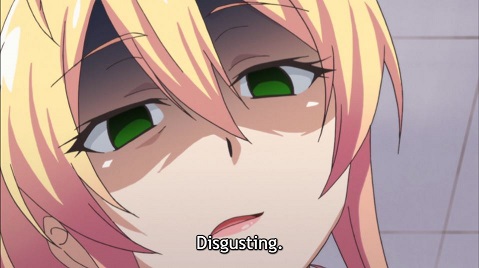 Junichi “Jun” Hashiba is an uncool high school student who frets about wanting to lose his virginity. Egged on by his friends, Jun gets on his knees and confesses his love to a classmate named Yukana Yame. The confession surprisingly works and the couple goes out. However, Jun finds himself in uncharted waters with Yame, a trendy and fashion-conscious “gal.”

“Oh, there’s this season’s obligatory T&A show,” I thought, as the opening seconds of the episode framed a set of censored labia and the opening credits showed off the kind of watermelon boobs that would give an actual human serious back problems. I could’ve called it there, but I kept on—you may all remember that I had a grand time laughing at Seven Mortal Sins last season, so I didn’t want to miss any idiotic gold.

The only idiot was me, flying ever higher on wings of wax.

Caution: So very, very many NSFW images below.

Gal is not content with being the kind of series that includes a lot of ridiculously fetishistic designs as a cynical icing over an actual attempt to tell a story. No, no. This is a show that strives. And what it strives for is to be completely repugnant on every level.

The women we see through the protagonist’s eyes (I didn’t bother to learn his name, because fuck him) are framed facelessly unless they’re a named character. The camera instead focuses on their butts and breasts. Even among the named characters, the majority of their dialogue is overridden by the protagonist’s internal monologue—what they say is utterly unimportant if he thinks he’s bombed his chance to have sex with them. Who they are as people is totally beside the point.

And then there are the protagonist’s friends, a trio of walking, gibbering reconstituted fecal vomit for which I do not possess enough anti-bacterial soap. And I own a lot of soap, readers.

These chucklefucks are responsible for an extended diatribe, complete with a fantasy sequence, about how girls who look like grade school students are sexy. The show occasionally has the protagonist’s internal monologue point out how deeply illegal all of this and so forth, as if the show is smugly patting itself on the back for realizing its own repugnance after wallowing in it for nearly a quarter of the episode.

This lusting after children is also set up to be a running gag with one of his friends. Charming.

That’s not even getting into the fact that the decision to ask out the titular “gal,” Yukana, is based on the assumption that she’ll be easy. Any half-hearted attempt the script might make to reassure us that it knows these boys are the worst is thoroughly gutted by several lengthy fantasy sequences indulging in this objectifying notion.

Yukana starts out as an all right character, with an adorable friendship and no time for this guy’s shit. I deluded myself briefly with imaginings of a better version of a totally different show, where a total scuzz learns that women are People, Actually.

That bubble was summarily burst when, because the script says so, it turns out this gal is actually totally into the protagonist and is going to go out with him.

If you want a series about pervy assholes where the show at least knows what’s up, you might as well rewatch Welcome to the NHK. If you want a glimpse into the Gal subculture that actually gives a shit about its female characters, check out Super Gals! This show belongs nowhere but the uttermost depths of a garbage pit.