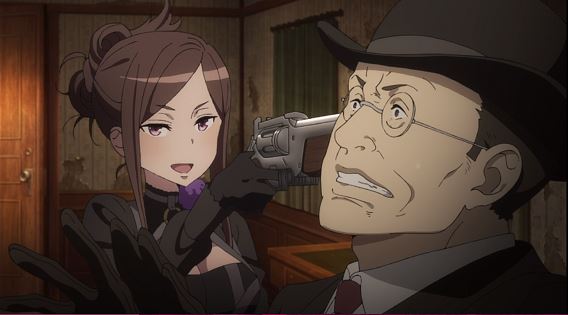 Five girls live in 19th century London, a city within the Albion Kingdom divided into east and west by a large wall. The girls serve as undercover spies enrolled as students at the prestigious Queen’s Mayfair school. The girls make use of their individual abilities to remain active in the underground world of disguise, espionage, infiltration, and car chases.

Minor bones of contention aside, this has the makings of an engaging and poignant action title. Princess Principal starts strong with a car chase sequence that wouldn’t be out of place in Lupin III (look if the show wants to have a jazz-influenced soundtrack and an anachronistic samurai whose team role is “cuts stuff,” I’m gonna make comparisons), introducing both its steampunk and magical elements in an active, showing-over-telling sort of way. The streets of alternate-history London are intricately designed and manage to look grimy and cluttered without distracting from the central action on screen.

Movement is fluid and gives a good sense of how the four main girls work as a team in combat. This is then complemented by the finale, which offers glimpses of each team member’s specialty. It’s solid as a spy thriller, managing to tell a compact story while also introducing character threads the series can easily pick up as it goes.

We spend most of this episode with Ange, who initially comes off as yet another Rei from Evangelion clone—standoffish, monotone, adopted child soldier, etc.—but is complicated by the fact that she’s also a compulsive liar. The script plays this for both comedy and tragedy in a single twenty-minute span, and resists what seems to be an initial attempt to completely spill her backstory on day one.

The other girls each get at least one beat to give us a sense of who they are, and presumably their characters and relationships will be fleshed out in episodes to come. They’re not particularly sexualized, though there is some serious weirdness going on in the costuming: Dorothy the team forger wears semi-historically accurate undergarments in a brief changing scene, and yet many of the outfits are much closer to Gothic Lolita than actual Victorian dress. Gotta get that moe aesthetic, I guess.

Which brings me to the show’s biggest problem: the girls’ designs clash hideously with the rest of the show. This isn’t like Baccano!, where all the characters have rather youthful designs alongside the violence and period setting. Basically every character who isn’t part of the core group looks like an adult, with smaller eyes and less exaggerated proportions. It’s especially egregious with the men, but even the women have smaller heads and eyes proportionally, as well as clothing more accurate to the Victorian setting.

With that as the backdrop, in addition to those hyper-detailed backgrounds, you wind up with scenes where it looks like Ange and her colleagues have wandered in from an entirely different show. The writing is strong enough that it doesn’t break the emotional weight of the story, but it is a constant minor distraction from what’s otherwise a very strong visual aesthetic. (Though there is a paper cutout art style used for the ending that’s downright adorable.)