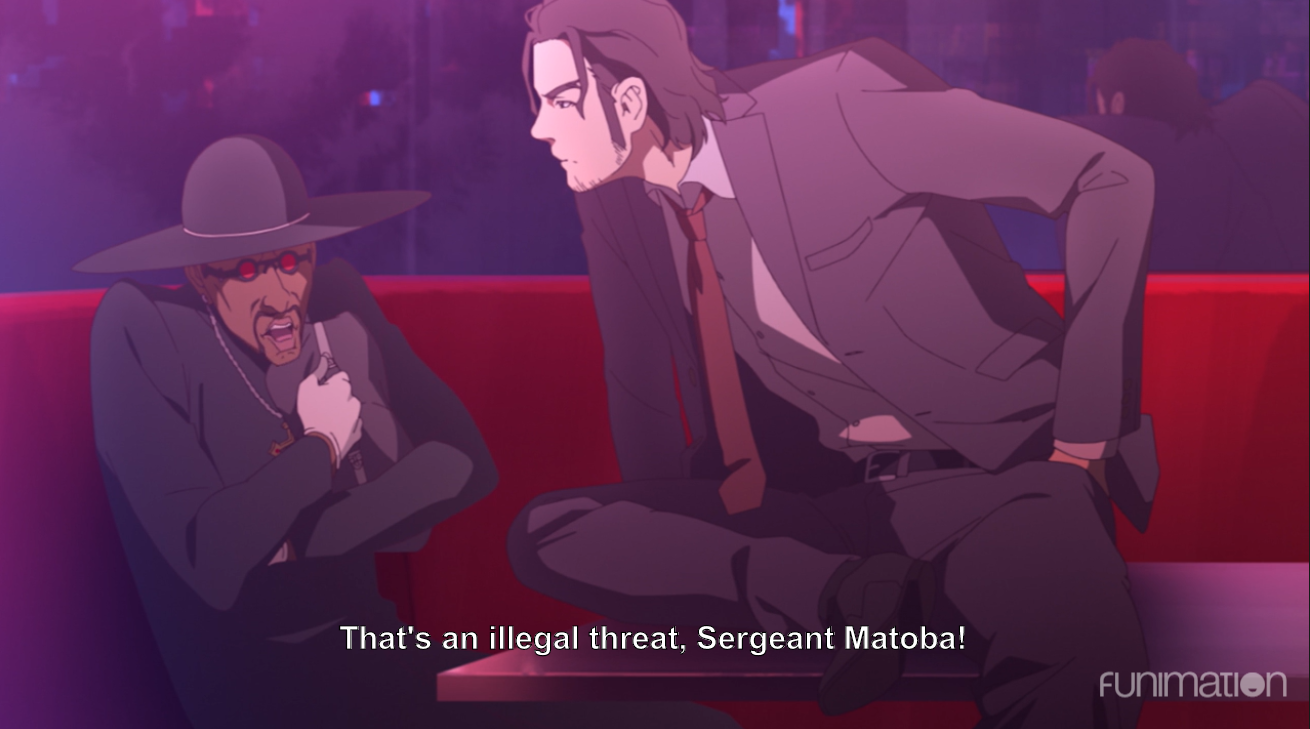 What’s it about? 15 years ago, a gate to another world appeared near the city of San-Teresa. Since then, the beings from the other side of that gate have mixed uneasily with humanity. Detective Kei Matoba’s partner is killed in a drug bust gone bad, and he’s forced to team up with Semanian knight Tilarna Exedilica in order to catch the killer.

You know how Netflix put out that movie Bright back in 2017, and it was really well-received and everybody liked it?

Oh, that’s not what happened at all?

In fairness, the better comparison here might be 1988’s Alien Nation, a film that also featured a racist veteran cop who holds a grudge against the alien racial metaphors for personal reasons but has to team up with a fish-out-of-water newbie in order to unravel a cross-cultural conspiracy. I very much look forward to hearing Mr. Patinkin’s turn as Tilarna in the dub.

You might’ve wondered why I’m talking about a thirty year old movie in reference to this 2019 anime, to which I say—yes, that is rather the problem.

I want to be endeared by the fact that this show is so clearly a love letter to 80s American cop movies—anime takes on western works and genres are a personal favorite of mine. However, that’s exactly what lands the show in hot water in a way it wouldn’t if the series were about cops in Japan or a completely self-contained fantasy world. Like the Banana Fish anime before it, Cop Craft sets its story in modern day America without taking any time to reassess how the tropes of the 1980s might need to change.

As America descends into a fascist hellscape, there is no escapism to be found in the antics of a “loose cannon cop” who we’re asked to believe is a racist for Understandable Reasons with a goshdarn heart of gold beneath. The camera pans over an uncommented-on scene of police brutality in the interrogation room as an officer tells Kei that they’ve gotten a lead.

The show’s opening narration talks about what a diverse city San-Teresa is, but all of the Black and brown characters who appear are either criminals or victims (wait, no; I think I there was one Black cop in the background of a single shot). Meanwhile, any discussion of racism is kept squarely to tensions between humanity and the Semanians, and Tilarna is told that putting up with Kei’s racism because he’s a skilled cop is just excusing his “poor manners.”

While good intentions don’t count for nothing, and obviously a team of Japanese animators working in Japan aren’t going to have an up-to-the-minute understanding of life for marginalized Americans, the disparity here is well beyond that point. It would be well beyond that point if this series had been in the works for two whole years (it was not; and while the light novels started in 2009, any halfway decent adaptation is made with its era in mind). It’s a complete ethical failure.

It feels almost like kicking a dead horse to point out that the depiction of Tilarna rubs me the wrong way—while she’s a competent warrior, the fish-out-of-water sequences run toward making her childish in a way that left me uneasy, a feeling compounded by an ending theme stacked with images of Tilarna in…shall we say, “wife material” situations. The framing undermines the material consistently, to the point where I was left wondering how long it would be until she became either a damsel or a love interest.

The series certainly looks good, with maybe my favorite opening theme of the season. And it’s quite competent at executing all of the old stand-by 80s cop tropes. It’s just that there’s this bad taste in my mouth, and if I come back for another episode I worry that it’ll never wash out.