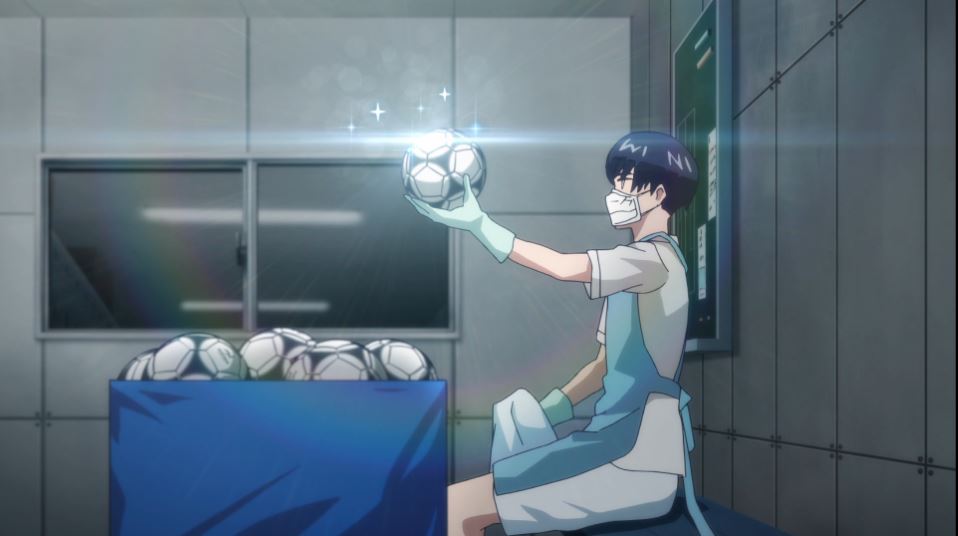 The handsome young soccer genius named Aoyama is a Japan representative. His play style is “cleanliness.” He doesn’t tackle and doesn’t head the ball. If he’s doing a throw-in, he’ll only do it if he’s wearing gloves.

“Comedic germaphobia” is not a good way to endear me to a series. So color me as surprised as anyone that I walked away from this one feeling endeared. A lot of this show’s potential hangs on whether it can keep up the thoughtfulness it displays in its premiere, but it started off on an awfully good foot.

Most shonen and sports anime fans know that when they come to the genre they’re going to get a lot of the same basic beats: the team as family, the underdogs who rise to the occasion, the long descriptions of technique, the hotblooded rivalry, the Very Intense Friendship (by which I mean Dat Shipping), so on and so forth. The gimmick on top becomes a spin to make those comforting tropes new again.

In this case, the gimmick could’ve been so offensive, so fast. As someone who lives with OCD, I was immediately put on guard; because let’s face it, anime isn’t always stupendous when it comes to portraying mental health issues. But Aoyama-kun went and flipped the script on me: Aoyama’s teammates all understand his limitations and support him, and team captain Miwa delivers a long speech about how very not-funny and actually limiting it is for Aoyama to love soccer while also living with germaphobia.

There are still a few things I found eye-rolling. It’s tiresome to see germaphobia continue to be the only facet of compulsive disorders that’s ever portrayed (I suppose intrusive thoughts aren’t so easy to boil down and use for a punchline), and if Aoyama is washing his hands that frequently they’re going to be dried, cracked and bleeding like nobody’s business (trust me). But for the most part, it’s better than I’ve ever expected from anime.

Hot-headed senpai Kaoru is much more the protagonist than Aoyama, at least in the premiere, and part of his arc is learning that Aoyama’s aversion to dirt isn’t just his way of avoiding hard work but a real barrier. The dynamic between the two is also rich with potential – Kaoru loudly proclaims that Aoyama isn’t “serious” about soccer, but the rest of the team is quick to point out that he’s much, much richer than everyone else on the team. Aoyama, meanwhile, is intensely talented but clearly min—maxed a certain set of skills in order to play at all.

It helps as well that there’s a good-natured charm about the series. The comedy is extremely hit-or-miss, largely involving chibis or a weird recurring gag about a rival team member flexing his abs threateningly, but the overall mood lands – in large part thanks to the strong affability already present among the team. Even having just met them, I want to root for them. And I’m not general a sports anime sort. Things like rendering the ED in 90s style Super Masculine art and having the cast sing it adds to that sweetness.

As I said, there’s still room for this to go off the rails. Part of the climax of this episode is forcing Aoyama to act in spite of his phobia, something I suspect will be a recurrent theme that the show will have to take care to continue treating with gravity lest it become a “just get over it”-tinted narrative. Aoyama also has a stalker who pops up in the fringes of this episode, so it remains to be seen whether the writing will take the same care with whatever her story is. Still, consider this one to keep an eye on.