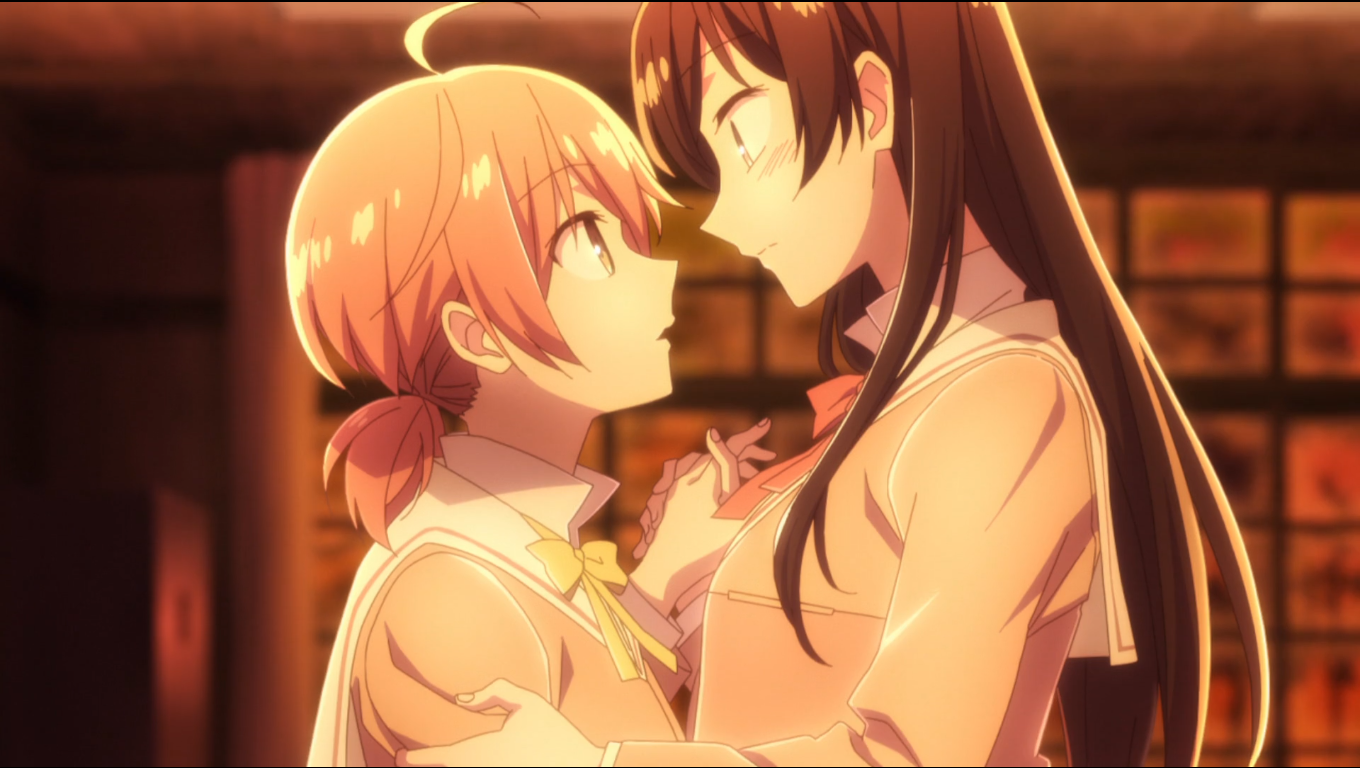 What’s it about? Yuu, an avid reader of romance stories, has been waiting her entire life to fall in love. When her classmate confesses to her at middle school graduation, however, she feels nothing. It appears she’s found someone who understands her in Touko Nanami, a girl who turns down everyone who confesses to her. But Touko soon declares that she is falling in love—with Yuu!

Bloom Into You’s premiere has all the makings of a solid romantic melodrama. Its tone is a quiet slow burn, mostly spent establishing Yuu as the titular “late bloomer” who feels isolated from all her romance-obsessed friends. At the same time, the premiere hints that, while she doesn’t understand them, she’s already showing signs of being drawn to Touko.

This is accompanied by lots of color filters emphasizing the florals and changing of seasons, a very fore-fronted orchestral soundtrack, and a heavy emphasis on point-of-view camera shots presumably meant to put the viewer in Yuu’s shoes. And while Bloom Into You is fairly far down on the list of yuri manga I’d personally like to see get full series adaptations, it’s worth giving attention to as a series that neither falls into the fetishization problems of the citrus anime nor the “just a phase” assumptions of the Class-S genre.

Still, it’s difficult for me to focus solely on those elements knowing the rather unique weight of expectations many are bringing to this adaptation.

Fans of the manga have been strongly drawn to Yuu as being on the asexual/aromantic spectrum for a while now, and it’s easy to see why, with her monologues about feeling isolated from friends who talk about crushes and her excitement at seemingly finding someone else baffled by everyone’s obsession with love. The manga itself is currently still running, leaving those readers hope that when (inevitably) the main couple gets together, it will do so in a way that still honors that identification.

Fans who bring that hope into the anime, however, I worry will find themselves disappointed or even hurt. Precisely because the manga is unfinished, the anime will be required to set its own tone and possibly an original ending, and signs of their decision are already in evidence.

The opening scene is a monologue about how Yuu will “never have” the special feeling of love that others do, with melancholy strings loudly implying how we’re meant to feel about all this. Special emphasis is given to Yuu’s meaningful moments of confusion at standard unrecognized crush behavior (“why did I rush here?” she asks herself, to which the savvy audience already knows, “because you wanted to see Touko”).

And, when the “other people are obsessed with romance” conversation does come up, it’s framed with sunset lighting and more sad strings—a lament that Yuu is shut out from this Important Inevitable Feeling rather than a moment of connection. Like certain other discourse-heavy series, Bloom Into You exists in the fraught space of not deliberately speaking to an underrepresented group but borrowing the coding of those groups to make their point, resulting in clumsiness and understandably hurt feelings from some audience members.

Still, if you go in with your expectations modulated for a series about a romantic relationship, you may find a visually appealing slow-burn with all the beats of a high school drama (and, hopefully, a Yuu that at least still reads as asexual and homoromantic). Here’s hoping it does well and opens the door to additional yuri anime made for queer female audiences.

[EDITOR’S NOTE: The wording in this review was edited after publication to improve clarity.]

[EDITOR’S NOTE: The same author wrote a revised opinion of the series based on the manga]