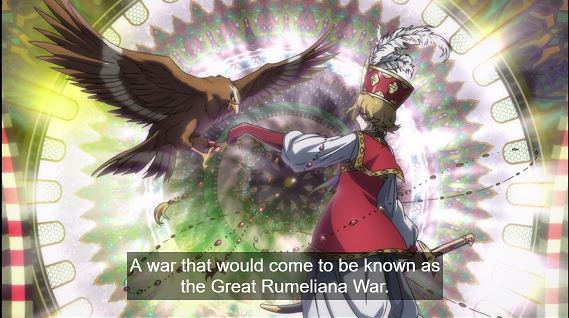 Mahmut is a young member of Türkiye Stratocracy’s council who holds the political and military title of Pasha. The council’s combination of warmongers and pacifists divide it. The threat of war and danger from the belligerent Empire put Türkiye’s safety at risk. As the country’s youngest military leader, Mahmut is determined to keep the peace. But with so much at stake, a long history of enemies and alliances draws the young man far into a political world he hopes to keep in check. The Pasha’s journey is not easy, and war may prevail despite his efforts.

It is not a good sign when your show starts off with a gigantic disclaimer worthy of South Park. Not a disclaimer the show itself put on, mind. This was a handy bit of ass-covering laid on by Amazon after the fact. My alarm bells were piqued and got gradually louder for 24 consecutive minutes.

Positive things first, because the fact that there are so many of them hurts me. This is set up to be a fantasy action series with a heavy conspiracy element, which is decidedly my jam. The character designs are colorful and varied and particularly sumptuous in the wardrobe department (we’ll come back to that).

And, while the pacing is a little bit odd—the first act is dedicated to introducing a plucky Girl Friday in a story that goes nowhere—mostly it’s a solid introduction of protagonist Mahmut as a war orphan who’s worked to rise through the ranks in hope of preventing more tragedy. It’s a fairly compact adventure that sets up threads for future episodes and arcs.

Unfortunately, there’s that big ol’ disclaimer and the reason behind its existence. Altair takes place in the land of “Türkiye,” you see. The conflict of this first episode (and implicitly the whole series) is kicked off by the assassination of some dude named “Franz,” a nation named Austria-Hungary Balt-Rhein is hoping to pin this assassination on Tofurkey, there are a bunch of assassins running around in black who are definitely not the “Black Hand,” and all of this led to the Just Okay War. (No, but really, they call it the Great Rumeliana War. See? They put a word in between! Totally different!)

I can’t just see this as a fantasy series about fantasy conspiracies that led to a fantasy war and lots of fantasy deaths. The show won’t let me. The coding is far too on-the-nose. Which means I have to turn around and look at it with a far sharper gaze. You want to talk about actual World War I, Altair? Fine. Will you be portraying a fantasy version of the Armenian Genocide carried out in 1915, an atrocity modern Turkey still refuses to acknowledge? Will it depict the battle of Fantasy Gallipoli, perhaps the Merry Trot of the Well-Lit Brigade? Does it comprehend the deaths of 800,000 people, 4 out of 5 of whom were civilians and children? Is there a Lost Generation for you, Altair?

The representation of history in fiction is important, but the requirements of responsibility are even more so. It’s perfectly fine to want to have a cool anime story where beautiful people fight each other and talk about politics and the protagonist staunchly monologues about how WAR IS BAD, MM’KAY. On the flip side, it’s ambitious and important to create media about humanity’s atrocities, giving voices to victims and recording important historical records we can learn from.

What’s deeply not okay is to cross those two things, taking the trappings of one of the most horrific wars in human history and slapping broad anime emotions on top of it (and if I’m gonna be really, really honest, I have my doubts that the series is focusing on Tofurkey for any other reason than the #aesthetic). This episode contains one genuinely affecting moment, when a young Mahmut drags his mother’s corpse out of their burning home and attempts to revive her with water, but I am extremely doubtful that it’ll be able to maintain that to a responsible degree.

Perhaps I am made cynical by the fact that the visuals for this episode consisted of “bearded men in turbans who are not important to the story (and also The One Father Figure)” and “traditional bishounen with brightly colored hair.” (You made Mahmut a blonde boy, huh, Altair? That was… a choice.)

While I would doubtless keep watching if this series were divorced from any real-world historical basis, it’s simply not. And because of that, it would be in personally poor conscience to continue.

….Oh, and by the way Amazon’s video player continues to be the absolute worst. This is the kind of show that has a lot of players who get introduced with on-screen names; the Amazon player doesn’t show that though, because it just has big ugly centered subs that take up an outrageous amount of space and half the time don’t bother to flash up the character info. Points off again, you terrible, pestilent service.