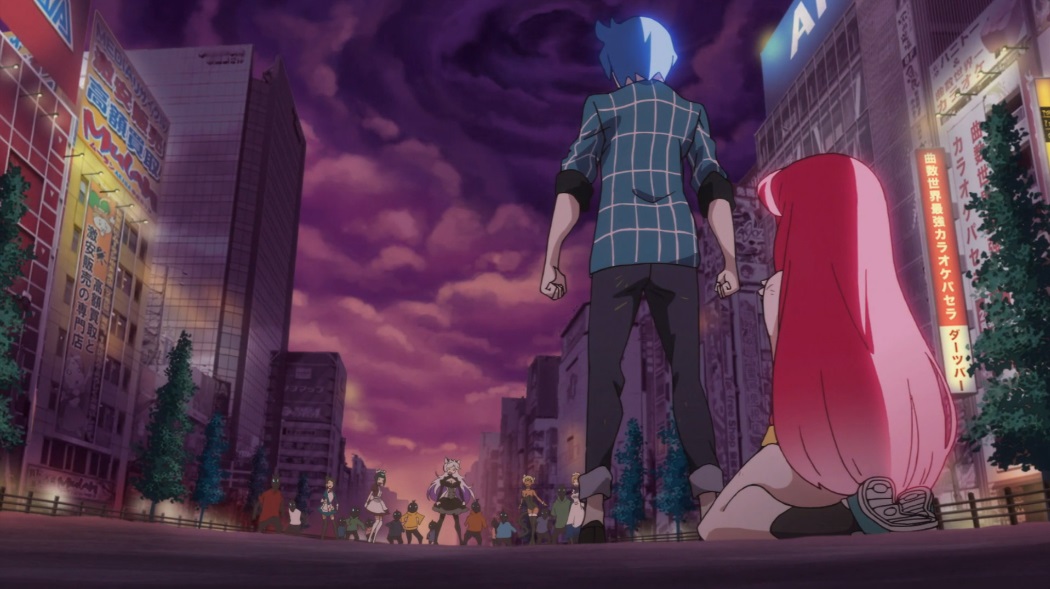 Tamotsu is looking for a rare figurine in Akihabara when a girl holding a baseball bat falls out of the sky. She begins fighting maids and monsters, which Tamotsu assumes is street theatre until the same girl shows up in the figurine store he is in and attacks a girl he is talking to. Could it have something to do with the Akihabara urban legend of the Bugged Ones, shadow creatures that infect and take over humans?

Oh yes, and there’s a prologue in which both Tamotsu and the baseball bat girl are facing down a group of women in maid outfits, who Tamotsu disarms by tearing all their clothes away. Only they’re not women, or even human! And yanking off their clothes is (probably) the only way to defeat them (I guess)! So there is no reason to feel uncomfortable watching embarrassed women try to cover themselves up after some guy heroically rips their clothes off for the good of humanity!

This is a show that made me remember I had an open bottle of wine in my fridge. Silver linings.

If you’re reading a review on a site called Anime Feminist, chances are this show is not for you. If you’re just here for recommendations, that is probably all you need to know. I did manage to find some positive things to say though, so read on if morbid curiosity is your thing.

I’ve mentioned before that I always appreciate it when a show makes its intentions known before the opening credits. To give Akiba’s Trip full credit, its first character introduction is a pair of breasts appearing out of smoke. What’s more, those aren’t the only breasts to appear in the first minute of the show.

If the name “AKIBA’STRIP” (get it?) wasn’t enough to make this clear, the show frontloads the fanservice and otaku in-jokes as something of a mating call for its target audience and a warning to the rest of us to keep a wide berth. As a viewer I would have switched off in that first 30 seconds with no hard feelings – this show is not for me, and that’s fine.

As a reviewer I continued to watch, actively searching for something nice to say while also planning my back-up review of “From a feminist perspective, this anime has no redeeming qualities. Anyway, check out our Patreon!”

I’m not going to continue watching this show, but if I did it would be for baseball bat girl, whose name we find out much later is Matome Mayonaka. She is compassionate but a fierce fighter, and treated with slightly more respect than the women she defeats. By this I mean that opportunities for easy upskirt shots are avoided and the one time clothes are removed from her it is framed as an act of violence more than for titillation. Admittedly, this is a low bar, and Akiba’s Trip barely clears it.

Matome is introduced floating down from the sky, like Sheeta in Laputa: Castle in the Sky, only to crash to the earth and straight into a fist fight with a woman in a frilly costume surrounded by shadowy black monsters. The woman is a Bugged One, a human taken over by a dark shadow which gives them superhuman strength and makes them “go berserk”, and Matome tries to defeat her by stripping her. Because, right, the Bugged Ones are sensitive to air, so they can be defeated by removing their clothes and exposing them to it, explaining why they all walk around in wetsuits and hazmat gear.

…Or short skirts and plunge necks. I’m sure these are just as effective at protecting them from THE AIR, which I remind you is apparently their SOLE WEAKNESS.

So the worldbuilding of this show is patchy at best, but it does have some intriguing elements to it. Akihabara is apparently something of a self-contained community which recently instituted agreements called “The Akihabara Accords” lifting restrictions on street performances. There are a group of peacekeeper types who seem to patrol, called “the vigilantes”. When Matome fights Bugged Ones, they accuse her of being a traitor, which she denies. Who – or what – is she and why is she fighting them?

(I always go into reviews as cold as I can so I can talk about the episode without any preconceptions, but given the level of plot construction that went into “We wear revealing and easily removed clothes to protect ourselves from THE AIR” let’s just say I’m not expecting terribly unpredictable answers.)

Speaking of the fighting, this is probably my favourite aspect of the show. Their approach is from the school of Scott Pilgrim, where cartoony geek visuals are the priority, and Kill Bill, where women don’t pull their punches. It is surprisingly visceral; there is gravity to it, and people – usually, but not always, women – get bruised and bloody in ugly ways. If you’re going to base a series around the pretty un-feminist idea that women fight each other in order to tear their sexy clothes off their sexy bodies, making it into unsexy, painful fighting is a relatively feminist-friendly way to go about it. (Spoiler alert: it gets a whole lot less feminist when the clothing removal warrior is a man.)

I laughed out loud a couple of times at the self-deprecating otaku humour. However, these moments poke very gentle fun at various otaku stereotypes without really skewering them. Yes, the “Anatomy Rangers” Tamotsu collects turn out to be human figures with organs like livers or intestines attached, but Tamotsu isn’t the only one who appreciates the worth of these things – a buxom blonde in hot cosplay does too, and after Tamotsu drops an”I assumed you were a Fake Geek Girl!” comment or two they become friends.

This kind of thing happens multiple times. Don’t worry, otaku viewers! Each moment of overt – and often endearing – geekiness will be appropriately balanced out by a moment of positive acknowledgement by a cute member of the opposite sex! (One of which is his younger sister, who I’m just waiting to find out isn’t actually related to him by blood. Let the guilt-free incest-tinged blushing begin!)

Well, looks like I’ve reached my limit for positive commentary on this show. Blunt opinion time: I had to take breaks every 1-3 minutes to make it through the first half of the episode because I hated it so much, and the second half levelled up the cringe factor to make it a truly uncomfortable watch, especially in what I sincerely hope is the most awful kissing scene of 2017. I might have warmed to this had Matome been the main character, but it looks like a harem set-up where all the women end up as Tamotsu’s sidekicks. Pass.

Let us know what you thought of the show in comments below! Please read our comments policy before joining the conversation and contact us if you have any problems.