What’s it about? The last thing Natsu Iwashimizu remembers is going to sleep in her own bed, but she’s just woken up on a sinking ship in the middle of a storm. She and three others take a raft to land, only to land on what appears to be a deserted island. Natsu is shy and clumsy, and has no survival skills whatsoever. Meanwhile, another group of youths find themselves battling giant insects in search of fresh water. Where are they, and how can they get home?

I want 7 SEEDS to be good so badly that I can almost taste it. The manga is everything I want to see more adaptations of: a long-running, award-winning, character-driven science-fiction josei manga by Yumi Tamura, artist of my beloved Basara. If there were any justice in the world, it would be a prestige production. And yet, it’s being adapted by Gonzo (strike one) for Netflix (strike two) by a director best known for Dog & Scissors (strike three).

I haven’t actually read the manga – it’s not commercially available in English – so I went in with little idea of what to expect other than my experience with Tamura’s other works. Basara was a revelation to me in high school as a female-centric, well-crafted epic with a huge, varied cast. Based on my limited knowledge and the first episode alone, 7 SEEDS looks like it will offer many of the same things that made me fall in love with that series.

Natsu looks to be the heroine, but it’s hard to say, since the episode switches between two groups. Regardless, there’s already a lot of promise for a great varied female cast. Natsu is fearful and lacks confidence, but not in a cute way – in fact, one of her teammates, Semimaru, complains about her not acting cute when she falls. Another young woman on her team, Botan, is tough but almost too harsh. Meanwhile, the other team focuses on Hana, who appears to be bright and resourceful. Already, that’s three female characters with strong personalities who fall well outside stereotypes.

This is promising, because unfortunately a lot of anime based around characters trying to survive, such as High School of the Dead, do tend to indulge in stereotypical female behavior. After all, just like Semimaru points out, it’s rife with opportunities for them to squeal cutely, or trip and fall and show off their panties, or get their clothes ripped off. Not that I expected to see that here… but it’s always nice to see media buck unpleasant norms.

The male characters so far come across the same way – on Natsu’s team, Arashi is kind and helpful, while Semimaru is a total shitbag. On Hana’s side, Yanagi is arrogant and violent. In stories with such large casts – and 7 SEEDS infamously has several dozen major characters, even if they have yet to appear – it’s essential that they make a strong impression quickly. And they certainly do! Unfortunately, the characters who made the strongest impressions on me immediately were Semimaru and Yanagi, both of whom I would like to die violently partly because they’re both would-be rapists.

Yes, 7 SEEDS does use the dreaded “sexual menace,” not once but twice in one episode. It’s not ideal, but at the same time, it’s not as bad as it could be. It’s not played up for fan service, and it’s properly represented as being more about power and domination than just sex.

The strength of Tamura’s writing shines through, thankfully, because visually this anime is an absolute mess. It’s not the worst thing to come out on Netflix this weekend – there’s always Forest of Piano part two – but it’s still startlingly ugly considering the release was delayed for two months. There’s some pretty good affective use of color, and the lush greens of the world certainly pop, but man that animation. It’s poorly drawn, often off-model, and often poorly-composited. Nothing has any real sense of weight, which is pretty necessary when characters are falling off overhangs or battling giant praying mantes. Also, it’s weirdly blurry at times, which makes me fear just how bad those shots would look without the blur.

In a just world, 7 SEEDS would have been a prestige release from a top anime studio, released on a platform that encourages community discussion. But it wasn’t. It’s a poorly-animated ONA from Gonzo, released under Netflix’s interminable bingewatch model. But… I think it’s still worth watching. Tamura may have deserved better, but this is certainly better than nothing, and even with the piss-poor animation and direction, I’m excited to see how things unfold. And, if this doesn’t get enough viewers, I may never get to… so please! Watch 7 SEEDS! For the sake of fantasy josei fans everywhere!

The dog days of summer have arrived. Good thing we’ve got a parade of anime to keep us entertained indoors. 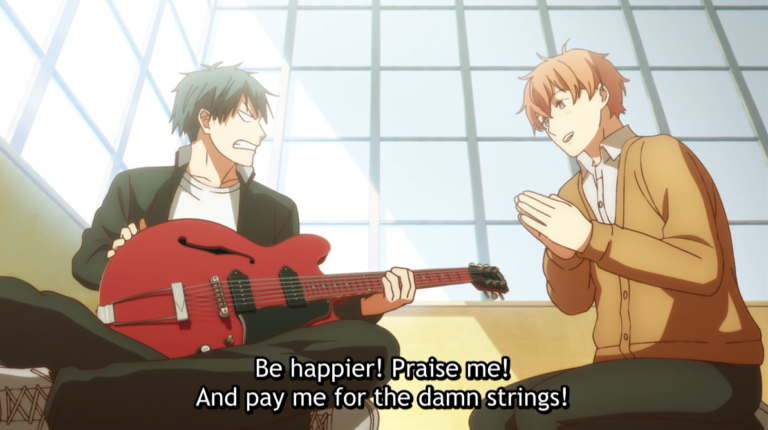 What’s it about? When Ritsuka Uenoyama agrees to fix the strings on the Gibson guitar his strange classmate Mafuyu always carries, he finds his entire life turned upside down. Now Mafuyu is coming to his band practice, following him around…and making him remember what originally made him so passionate about music.