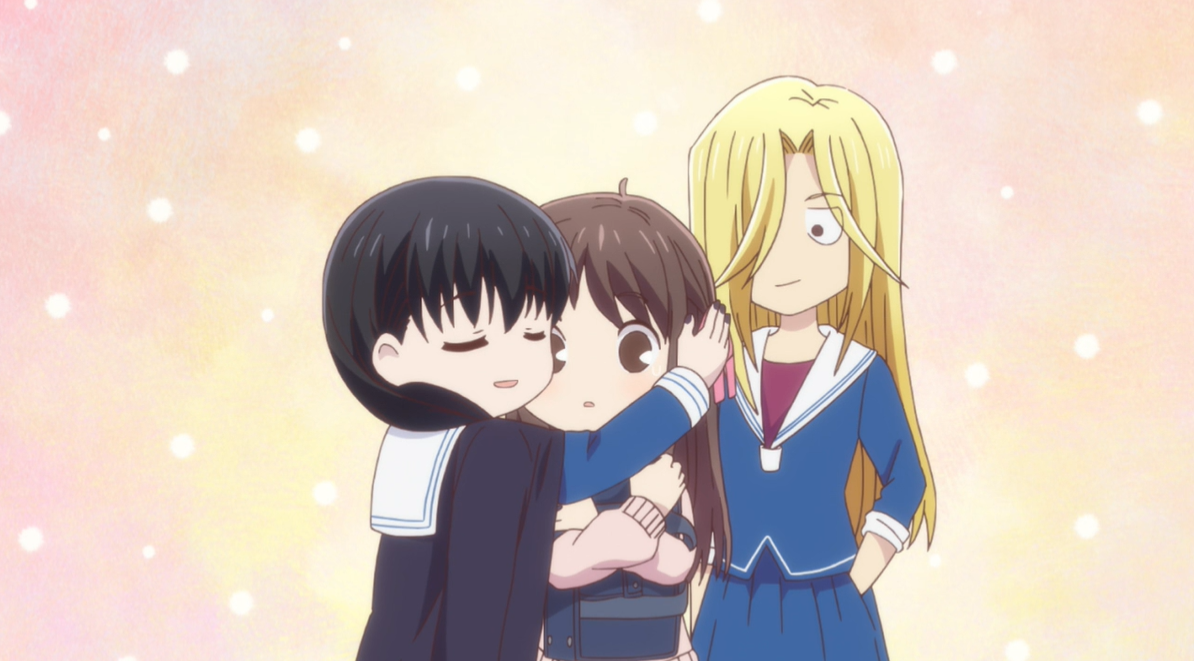 This week: an interview with Ikuhara about Revolutionary Girl Utena’s influences, Ikumi Nakamura’s fan-favorite E3 appearance, and a podcast on Ainu oral history.

[Feature] Not “Just a Phase”: How Bloom Into You challenges common yuri tropes

Yuri is about women falling in love with one another, but does it reflect lived queer identity? Erica Friedman put the question to several yuri mangaka.

[AniFemTalk] What LGBTQ+ manga would you like to see localized?

It’s time once again to ask: what manga should readers be aware of and asking publishers to localize?

A translated interview from 2000 between Kunihiko Ikuhara and critic Mari Kotani about Utena’s origins and influences.

Ikuhara: Maybe she’s a prince-as-illusion. Because Utena is a woman, one understands visually that she is a prince only as an illusion. And from the very beginning, all the characters realize that the prince is nothing more than a dream. I thought that was interesting.

Kotani: The illusions support each other: is the prince required because there is a princess, or is the princess required because there is a prince? It’s a condition where we don’t know clearly which illusion came first. And to demolish the fact that this structure itself is the illusion, they keep venturing into various situations over and over. I feel like you are analyzing and investigating prince-princess fairy tales extremely closely.
You once said that Utena is a girl who has a romance, but that there is a difference between “romance” and “romantic”.
[Translator’s Note: ロマン “romance” as a loanword in Japanese can mean something like a near-impossible dream, a great undertaking, or an epic adventure.]
Ikuhara: “Romantic” has become a word for girls, and “romance” basically a word for men. In short, “romantic” is something that comes from the other. Like, I’ll make you into a princess, or I’ll arrange a wedding at a wonderful location; it’s a world which a prince will appear from and return into. While “romance” is something like venturing into the trackless wilderness, that kind of world.
Kotani: Even the words themselves are gendered into a word for men and a word for women?

A podcast conversation with one of the two screenwriters of the hit film.

Keith and Dan have a wide-ranging conversation about the tricky process behind adapting a video game franchise like Pokémon into a well-received live action film. They also discuss creating Netflix’s Latinx reboot of the classic Norman Lear sitcom One Day at a Time, being a nerd of color in Hollywood, the pros and cons of nostalgia and fandom, and why people will never fully grasp the beauty and wonder that was 1600 Penn.

Women working in caretaking positions like teaching, day care and nursing are often pushed out if they have children of their own, leading to a chronic shortage for other would-be working mothers.

“Once a woman gets pregnant and gives birth, it’s impossible for her to work in the same way as single women or male workers,” said Yumi Hasegawa, a lawyer who has worked on maternity discrimination cases. “That’s why the companies think, ‘We don’t want such workers,’ and that leads to maternity harassment.”

But discrimination in child care centers has a particular domino effect–because it ends up blocking other mothers from being able to go back to work as well.

Most of the licensed day care or nursery schoolteachers in Japan are women, and many end up leaving the profession. One of the biggest reasons, they say, is that they find it impossible to continue working once they have children, according to a poll by the National Union for Day Care and Welfare Workers.

Many teachers “wonder whether it’s even a good idea to mention their pregnancies,” said Kazuko Sasaki, head of the union’s nursery school chapter in Tokyo.

In one case last year, a preschool principal instructed her teachers to schedule their pregnancies so that their maternity leaves would not overlap, then reprimanded one of them for getting pregnant out of turn.

For all those J-Drama fans looking to support legal distribution where they can.

Here it is. The One List to Rule Them All. I took the time to scour the internet and create a detailed list of the latest 100% Legal Japanese Drama Streaming Sites available. I have also included what countries they are available in and how much they cost per month. I shall try to keep this list up-to-date and add/subtract sites as needed.

In 60% of forced sex cases, victims did not or could not fight back (The Asahi Shimbun, Michiko Kawahara)

The research comes in response to the fact that sexual assault is currently only prosecutable under Japanese law if the victim fought back.

Under Japan’s criminal law, non-consensual sex is not regarded as a crime unless perpetrators resort to violence or threat. A string of recent not-guilty rulings in rape cases has triggered renewed calls to revise the legislation.

The researchers said the survey was intended to shed light on how victims view their ordeal, thereby providing more ammunition for discussion on the issue.

Saito and her colleagues contacted 31 victimized women through a victims’ group and the Internet between May and November of last year.

Dispute Arises Over ‘No-No Boy,’ a Classic of Asian-American Literature With a Complex History (The New York Times, Alexandra Alter)

The 1957 novel about a Japanese-American draft resister is a lost classic, but the fact that its first publication was in Japan meant that Penguin was able to release a “public domain” version in competition with an earlier republication done with the blessing of the author’s widow.

Penguin said that the novel is in the public domain and was never copyrighted in the United States, and that the copyright registration Wong filed covers only the introduction to the 1976 edition, not the underlying work.

“We acted in good faith to pursue ‘No-No Boy’ for publication,” Penguin said in a statement. “Our intent is to continue important conversations around ‘No-No Boy’ through its inclusion in the Penguin Classics series.”

The copyright question has overshadowed what should have been a moment of celebration for Okada’s literary legacy. The novel’s uncertain copyright status is further complicated by the fact that it was first published in Japan, by an English-language publisher, but the author is American.

Some Asian-American organizations, as well as artists and writers, have thrown their support behind Wong. “I am very disappointed in Penguin for appropriating John Okada’s ‘No-No Boy,’” the novelist Viet Thanh Nguyen tweeted on Wednesday.

The Bayonetta character designer is in the spotlight after a charming appearance at this year’s E3 (an event often very short on charm and genuine humanity).

If this is the first you’ve heard of Nakamura, know that she has been involved in some of the most beloved games of the last decade and counting. Her artistic resume stretches back as far as 2006’s beloved mythical wolf god simulator Okami, and after working on several more Capcom titles like Super Street Fighter IV and Marvel vs. Capcom 3, she joined Platinum Games as a Conceptual Designer on Bayonetta. Her talent did not receive much media attention until she later joined Tango Gameworks, where she has served under the tutelage of legendary game designer Shinji Mikami (Resident Evil, Dino Crisis, et al). As Lead Artist on The Evil Within and its sequel, she’s the person responsible for this horrible thing and this absolute nightmare. Mikami, recognizing her skill and further potential, has been shepherding her in the ways of product management, with Ghostline: Tokyo as her debut title in a directorial position.

The plaintiff was investigating a claim by a female employee who was harassed by the company president at a party only to be first put on standby and then fired by the accused.

According to the lawsuit, at an end-of-year “bonenkai” party on Dec. 6, 2018, Fujii hugged a female employee and said things like, “The back of your neck excites me.”

Other participants later informed the legal affairs division chief about the president’s actions at the party, the woman said.

She said she listened to a description of the incident from the female employee, who also asked that a contact point be established at the company where victims of sexual harassment can consult with third-party experts.

However, the woman said Fujii summoned her to his office on Dec. 17 and said, “Sexual harassment has not occurred, so it’s outrageous that you are fabricating such an incident.”

The woman was ordered to remain on stand-by at her home and was fired as of March 28.

A discussion of Ainu oral history regarding spiritual beings and one of its most accomplished preservers.

In this episode, Dr. Strong recounts the cultural significance of Kamuy Yukar, Ainu epic tales of spiritual beings. We discuss Ainu oral history traditions, the cultural role of Kamuy Yukar, and the life of Chiri Yukie, a young Ainu woman who transcribed and preserved many Kamuy Yukar before her untimely death in 1922.

Thread: The owner of trans-exclusionary lesbian bar Goldfinger posted a response apology to condemnation of the bar. Our own editor Chiaki was less than impressed.

It’s always a good time to keep one another updated on titles with queer representation. Thanks, AniFam!