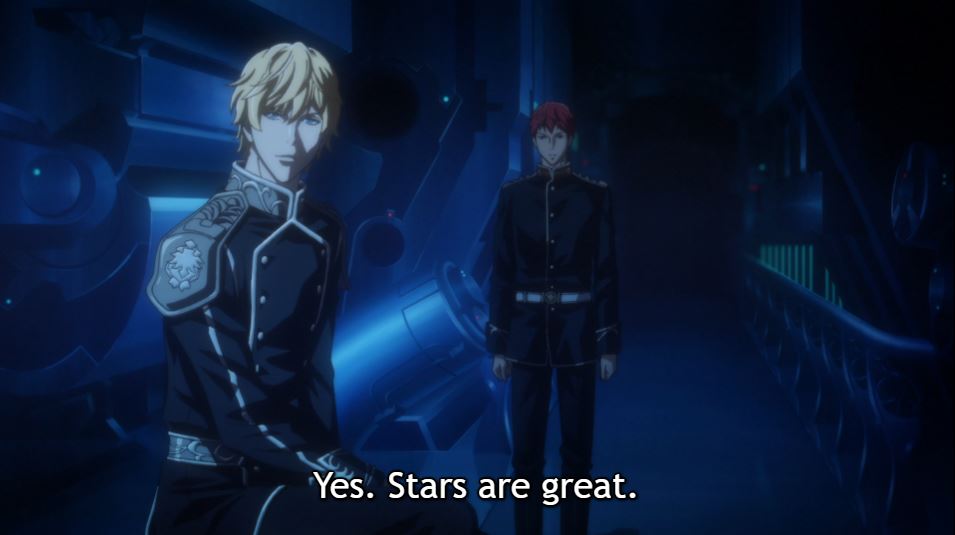 [Perspectives] Nerdy Talk and New Frontiers: My wandering ramble on coming out in the anime fandom

Samantha Ferreira of Anime Herald shares her journey to coming out as a trans woman.

[Feature] Dangerous Precedents: What the Flying Colors Foundation got wrong about anime and mental health

Isaac B. Akers dissects the now-defunct survey’s troubling tackling of mental health issues and desire to validate a pre-formed thesis rather than gather objective data.

The team details their favorites of the past season.

A fun, kid-friendly horror show with a promising female protagonist—as long as her clumsiness here doesn’t mean she’ll be a damsel the whole series.

Looking back at the new shows and carryovers of Winter 2018, featuring a bit of catharsis about that Ancient Magus’ Bride ending.

Dumb and mostly harmless (aside from one awful character intro), with a lot of unintentional comedy to its world-building.

[AniFemTalk] What’s your most anticipated premiere?

What upcoming series are you looking forward to this season?

Astonishingly ugly to look at and likely to be culturally insensitive to boot.

A problematic “kidnapped bride” premise given a leg up by its active, adult protagonist.

Likely to be a huge hit with hardcore Gundam fans and a confusing slog for everyone else.

[Review] Legend of the Galactic Heroes: Die Neue These – Episode 1

A pretty, slow-burn political space opera that might just remind you to watch the classic series.

A recommendation list for feminist anime and manga fans.

In this:
Beauty is the Beast
Pink
Fruits Basket (manga update)
Dawn of the Arcana
Complex Age
In This Corner of the World
Flip Flappers
Recovery of an MMO Junkie
Fushigi Yugi (yes, really!)

A list of new anime with female directors and those directors’ previous credits.

Tadakoi is an original love story about a photographer boy and a girl from a foreign country. Mitsue Yamazaki directs the series at Dogakobo studio, including much of the creative staff that helped her make her previous work with the studio, Monthly Girls’ Nozaki-kun. For this project, however, Chieko Nakamura joins as art director. Yamazaki also has an assistant director for this series, Yoshiyuki Fujiwara, director of GJ-Bu and New Game!

Mitsue Yamazaki made her debut as director on the adaption of the Hakkenden manga, though working under chief director Osamu Yamasaki. Previously, she had been groomed for the director role, serving as an assistant director on Kurenai, the 2008 iteration of Yozakura Quartet, and Mawaru Penguindrum. Her first series as the sole director was the popular Monthly Girls’ Nozaki-kun anime, followed by 2016’s Magic-Kyun! Renaissance. Since then, Yamazaki assisted her assistant director for Tadakoi on New Game by working as a storyboard artist and episode director on the second season.

Seven cities in Japan now support marriage equality, though it is still illegal on a national level.

The city, on the northern coast of the island of Kyushu, is the second-biggest in the country to recognise same-sex partners.

Lex hosted several panels over the weekend at Anime Boston.

How does your identity influence the panels you’ll be giving at Anime Boston?

You see it during my Persona panels. I’m very open about the effect that toxic masculinity has had on me. I compare myself to Kanji Tatsumi without throwing tables at people. You also see it with my magical girl panel. I pass for a straight, white male, but I’ve learned more about myself through Kill La Kill, through Utena, than I’ve learned through any, and I’m doing air quotes here, “boy shows.” From coming to grips with your own emotions to forging friendships—because of these lessons from these shows, I’ve gotten a much better understanding of who I am.

A history of the “Three Sisters,” who dominated Japanese entertainment after World War II.

Among all the entertainers that flourished in this context, some stars shone particularly brighter. Some of them were three – now-legendary – girls, known as “Sannin Musume” (The Three Sisters), who were the most popular female singers in the early post-war era. All three of them had their own successful, individual careers, but they collaborated on some songs – that haven’t been released due to each of them belonging to different labels – and a total of four movies together, mostly during the 1950s.

Their talent and their music brought certain comfort in times that were truly needed, and they’re considered national icons.

A rundown of the various ethical questions raised in response to the Flying Colors Foundation.

Other questions have been raised about ties to a for-profit company, the Otaku Pin Club, which was founded by the same person who started FCF. OPC filed for registration just a few months before FCF, but Daniel Suh, who founded both, claims to have divested himself of all ties to the for-profit effort.

Right before their official nonprofit registration in November, FCF met with for-profit companies in Japan that were reportedly interested in their data, another warning sign to fans made wary by the recent scandal involving Facebook’s handling of private data. FCF claims not to “track, collect, or keep any online data about participants apart from their voluntary responses to our surveys,” but according to a lengthy Medium post by an industry commentator, Typeform, the service used to conduct the survey collects and stores users’ IP addresses, browser type, and operating system. Whether FCF is merely ignorant of their tools’ capabilities or is deliberately obscuring how much data they possess, their practice demonstrates a lack of accountability on a very sensitive issue, especially given their early connections with for-profit ventures interested in data.

Three new studios are opening, including GRIZZLY—a BL-exclusive studio with a female director and ties to MAPPA.

GRIZZLY boldly emerged into the anime world by proclaiming that they will be the first studio to specialize solely on boys love titles. Thematic companies are an interesting subject matter since, despite what fans and critics believed for ages, anime studios struggle to establish an identity of their own, which is an invaluable asset to make sure producers think about your company when they’ve got an idea in mind. Some studios have achieved that goal very deliberately – the most obvious example being SHAFT’s still ongoing crusade – while others have more or less stumbled into that via successful works, which led to Dogakobo becoming the studio of choice for cute 4koma adaptations a while back, and White Fox currently being offered all gritty fantasy titles. Having a specific genre space in mind from the get-go, especially a criminally underrepresented one like BL, makes GRIZZLY an intriguing new force in this industry that we’ll make sure to follow.

A preview of Okada’s book is available on J-Novel Club and the final release will be sold on Amazon.

As I also mentioned on Twitter, Sam Pinansky was the biggest MVP here for licensing the book in the first place. J-Novel Club isn’t known for doing non-fiction in the first place – their name is literally about the opposite thing. Even if you don’t care much about this particular book, I think that their recent experiments have been interesting. Of course, isekai light novels are still their bread and butter, and I don’t expect that to change anytime soon.

Anyway, I’m mainly occupied with my day job at Anime News Network, so I picked up this project as a one-time thing. I don’t have any plans to translate books for J-Novel Club on a regular basis, but I’m not averse to doing another passion project if the opportunity ever arises again.

Short reviews of yuri titles both old and new.

The most eye-catching element of After Hours is simply that it’s doing something different from the bulk of yuri that makes it to the west: the main characters are adults, it takes place in Japan’s club scene, and the central couple meet by having a one-night stand. That said, there’s nothing wrong with structuring your story to stand out, and the manga’s first volume has the character goods in addition to the blessing of not being yet more high school fare.

The main couple have an “assured professional” and “adrift protagonist looking for purpose” dynamic, which is mostly just getting started in the first volume here. A lot of time is also dedicated to establishing the supporting cast and explaining the technical basics of what it’s like to work as a DJ. It doesn’t leave a ton of time to dig into the relationship aspect, but that’s not so much a problem.

Off the coast of San Pedro, a Japanese community erased (Curbed, Madley Meares)

An account of a close-knit fishing village populated largely by Japanese immigrants and Japanese-Americans, which was destroyed by raids during America’s internment of any citizens of Japanese descent.

The next two months were ones of terror and strife in Fish Harbor. Some canneries fired their Japanese employees, while fights between Filipino and Japanese workers increased (Japan had invaded the Philippines).

The poles for the nets women used for drying salted fish were suspected of being antennas used to communicate with the motherland. Residents’ money was frozen in the local banks. Raids were frequent, and sheriff’s deputies often left the houses and businesses they searched in shambles. “Some of them broke Christmas ornaments on the trees,” Kuniko Okumura remembered. “Their excuse being-there might be explosives in them. Of course, there weren’t any.”

On February 2nd, more raids occurred; all Japanese men with commercial fishing lines were questioned and detained. On the 19th, President Roosevelt issued Executive Order 9006, paving the way for the removal of all Japanese-Americans from the West Coast through the creation of military zones. On the 25th, armed soldiers informed all residents of Terminal Island (both Japanese and non-Japanese), that they had 48 hours to leave. They had no suggestions as to where the refugees should go.

It’s a big, exciting season, so check out everyone’s faves and makes sure you don’t miss out!

This spring or this year? For this year, FLCL season 2. I didn't watch anime until I was about 30 years old… the exception was Cowboy Bebop, Samurai Champloo, and FLCL (that is, the Adult Swim crew). FLCL is my favorite animation, anime or otherwise.

I'm waiting for many anime series, but the ones I'm most excited about are…
1-Megalo Box
2-Hisone to Maso-tan
3-Wotaku ni Koi wa Muzukashii
4-SAO Alternative pic.twitter.com/BkOZxIUvG5