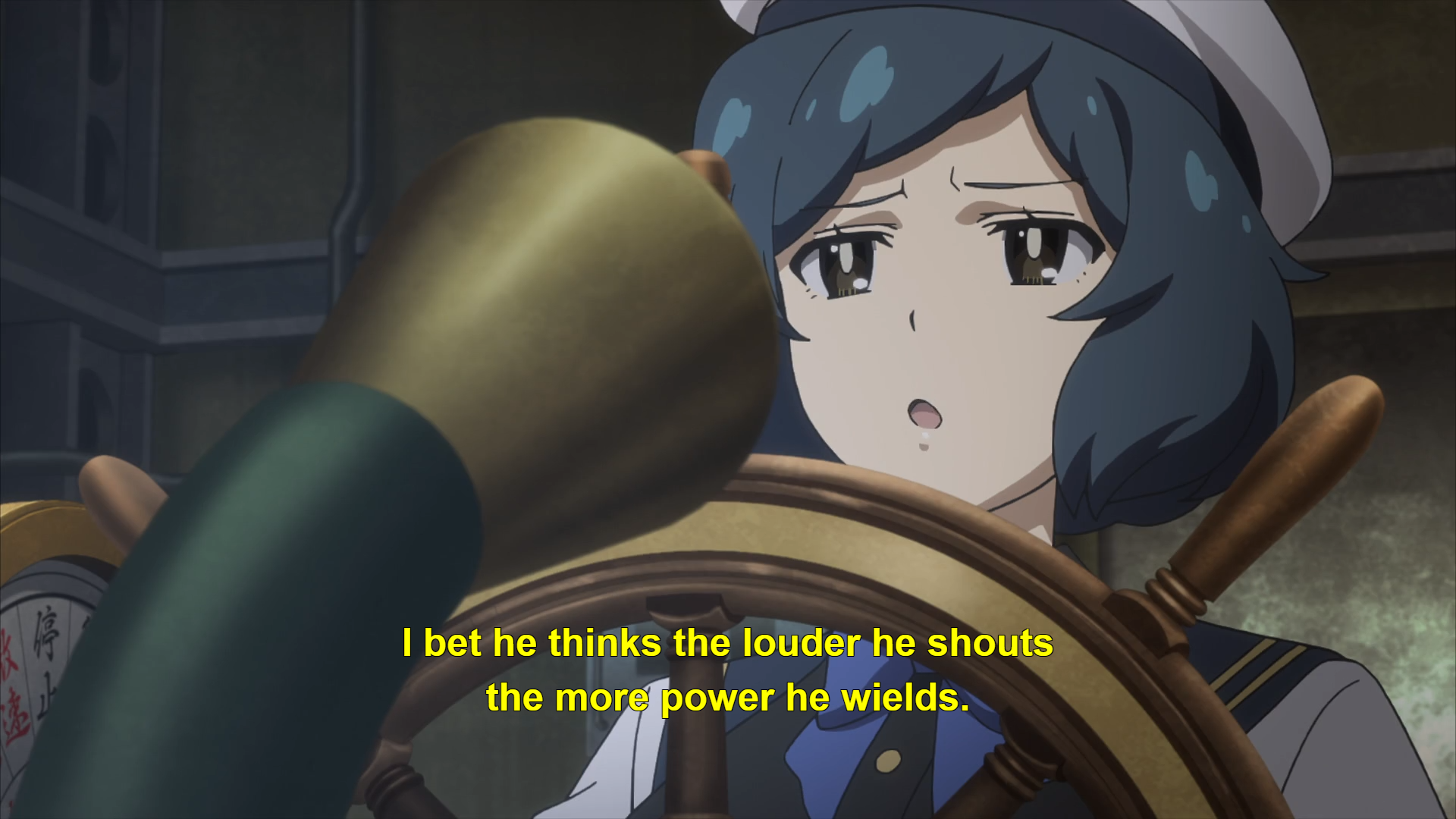 This week: harassment of Japanese women in politics, a snub of the original Neon Genesis Evangelion dub cast, and Toei lends Sailor Moon characters to the promotion of a ‘beauty shake.”

[History] From Princes to Pigeons: A Beginner’s Guide to Otome Games

Katie Randazzo gives a brief history of otoge’s origins, its common tropes, and some of the most popular titles available in English.

[Perspectives] BanG Dream! and the reality of being a young caregiver

Aimee Hart shares her connection to Saya’s story about caring for a chronically ill family member, and how the series emphasizes the importance of self-care without demonizing Saya’s mother.

Despite some technical difficulties, Caitlin, Peter, and (most of) Gabriella are back!

[AniFemTalk] What was your favorite Winter 2019 anime?

One last look at the current season before we tip into the next.

An overview of the GID Act and the legal and social discriminations faced by Japan’s trans population.

People we spoke to almost universally have experienced discrimination at work or while applying for jobs. One person told me that after he was unable to get a job, he later coincidentally bumped into the company’s human resources head. They actually told him they “weren’t ready to accept transgender people” at the company.

This is one reason why transgender youth are under enormous pressure to finish their transition before entering the job market, which is normally when they graduate college at 22. Because this law only allows those who are 20 years or older to change their legal gender, they are really pressured to rush into these major surgeries in a very limited time.

One transgender man I spoke to who had the surgeries and changed his legal gender regretted what he had to go through – he really felt like he had to rush through all those procedures before going into the job market, and he didn’t have much time to think about preserving the possibility to have his own biological kids. He was struggling to come to terms with the sterilization and what happened to him. He thinks of the process as a humiliating time that violated his rights. He wanted this change and knew he was a man, but he told me that if the law didn’t exist, he would not have had the surgery to sterilize himself at that point.

What is the purpose of a call-out post? (Otaku Journalist)

A speculation on when a callout post is called for, taking into consideration the amount of influence the subject has and what the net benefit will be.

After reaching out to that convention during my reporting process, I discovered that they had recently been made aware of this person’s actions, and were in the process of cutting ties. Within a week, this person faced the consequences and today has no platform beyond Twitter.

I began my reporting on a racist with a platform. But within weeks, they were just a racist with no platform and no way to significantly affect the community at large. I thought that writing an article about their behavior would be punching down, the same way that sending my 8,000+ Twitter followers after any random person on the platform would be.

But recently, I have been questioning this decision after following the recent conversation. People are sharing this person’s offensive comments on Twitter, which the person continues to make routinely. As a result, people are becoming aware of this person’s behavior, often for the first time. The fact that so many people didn’t know about this person’s bad behavior makes me wonder if I was right not to publicize my reporting last year.

An op-ed on the persistent infantilization Asian women face in daily interactions.

In other words, it’s not just me, not at all. An Asian novelist friend tells me that at three separate events over three days, she was publicly called cute or beautiful three times. When the Netflix show featuring the tidying-up consultant Marie Kondo debuted, three prominent white feminists tweeted that Ms. Kondo was a “pretty little pixie” with “fairylike delicacy” and that her speaking Japanese on her show was symptomatic of America’s decline. When I spoke out against these statements, I was asked why I was getting bothered about a compliment. “You’re so cute when you’re angry,” a stranger told me. “Shut up, cutie,” another said.

“Cute.” “Adorable.” “I wish I could adopt you.” “Pixie.” These are things said by feminists, writers and people who take time out of their weekends to attend a literary festival. A lot of progressive people, and would-be well-meaning people, many of whom, I imagine, would be dismayed to learn anything they’ve done could be thought racist. Because that’s what it is — however well intentioned, it’s racism.

The Young Master’s Revenge (with Anna Neatrour) (Shojo and Tell)

A podcast discussion of the four-volume shoujo series.

What if you had scars on your butt. From being bitten by snapping turtles when you were little. That is the whole premise of this comedy from Meca Tanaka, and for such a quick, silly series, it really is delightful. The revenge that Leo, the boy with the turtle butt scars, wants to exact on his childhood friend and crush Tenma of course turns into true love. You’ve seen all these tropes before, but not quite with this amount of disregard and subtle subversion. Shojo & Tell host Ashley and librarian and manga reviewer Anna discuss their favorite scenes (girls kabedon’ing boys!!), how this slots into the current crop of shojo manga with male leads, and have a very silly shipping corner. A short and sweet episode for a short and sweet series!

One in four women in politics face harassment either from their coworkers or constituents.

The man started showing up at her functions about a year after she won a seat in the assembly election.

“I used to support the other party, but now I want to support you,” he said early on.

He later promised he could deliver her dozens of votes and said, “Let’s go out for drinks, just the two of us.”

Although totally against the idea, she started to wonder about losing those precious votes. She said she also felt that she could not bluntly reject one of her supporters.

She went with the man to a restaurant but brought along two other supporters so she would not be alone with him. It didn’t matter. In a room with tatami mats, the man sat next to her and groped her.

“It is my job to meet the ward’s residents to talk about my policies,” the assemblywoman said. “What should I do when they pressure me to go out for drinks?”

The incident crushed her conviction as a politician.

Is it appropriate for Sailor Moon to be partnering with weight loss shake Slim Up Slim? (Sailor Moon News)

Despite the many positive elements of the series, it’s always had problems with fat-shaming—its popular status among young women makes the decision to use the characters to market a weight loss shake concerning.

What exactly is Slim Up Slim? It’s a weight loss shake. It’s marketed not just as a diet or weight loss shake but also as a “beauty diet” shake. The purpose of this product does not seem to be weight loss for the sake of health but rather weight loss for the sake of beauty. Many of these products contain collagen, which is not there to help with healthy weight loss but with skin beauty, though there is no evidence that ingesting collagen actually does anything. While calorie reduction will surely result in weight loss, these shakes containing collagen and lactic acid bacteria share many qualities with the type of scam weight loss products such as those promoted by snake oil salesmen like Doctor Oz.

The individual, whose name was withheld, was not fired but moved to a different division.

According to the Japan Pension Service and other sources, the branch head posted comments on Twitter while concealing his real name and identity. With people from South Korea in mind, he allegedly tweeted “If any more come to Japan, it’ll lead directly to the worsening of civil order.” Regarding South Koreans he also allegedly posted a tweet saying, “They’re a cowardly people with a disposition for a dependent country. Severing ties with them and ignoring them is best.” Yet another comment read, “They’re receiving anti-Japan education, so there’s no reason for them to come (to Japan) in the first place.”

Despite playing the roles for over a decade, the dub actors who starred in the original series, End of Evangelion, and Rebuild where not contacted for Netflix’s redub.

Lee was not the only dub actress to respond, however. In a Facebook post, Tiffany Grant revealed how she dealt with the knowledge that she would no longer be voicing Asuka. :The truth is that I have known for months that we were all being replaced,” she said. “I flew myself out to LA in early December to audition — for the first time — for the role of Asuka. It was the most surreal moment of my life.”

Grant’s post confirms two very important things about the Netflix release: the original dub will not be available for streaming, and that the original actors auditioned for their roles. It is unknown if they were ever considered, despite speculation from both Lee and Grant that they were only humored with an audition.

Tweet: A request for input on a research project about fan engagement

I'm working on a critical analysis regarding fandom culture for my Rhetoric in Pop Culture final project and I would LOVE to hear from people about their particular fandom engagement. https://t.co/h1mMwIWfeZ

Mana Hamada – a Japanese fashion model known for speaking openly about being an out lesbian/LGBT supporter – on the street in Shibuya this last weekend https://t.co/I9SvgY6f3S pic.twitter.com/VRIFohy05a

It’s been a hit-or-miss winter, but there’s some real strength in the carry-overs.

Kaguya Sama and Run With the Wind!