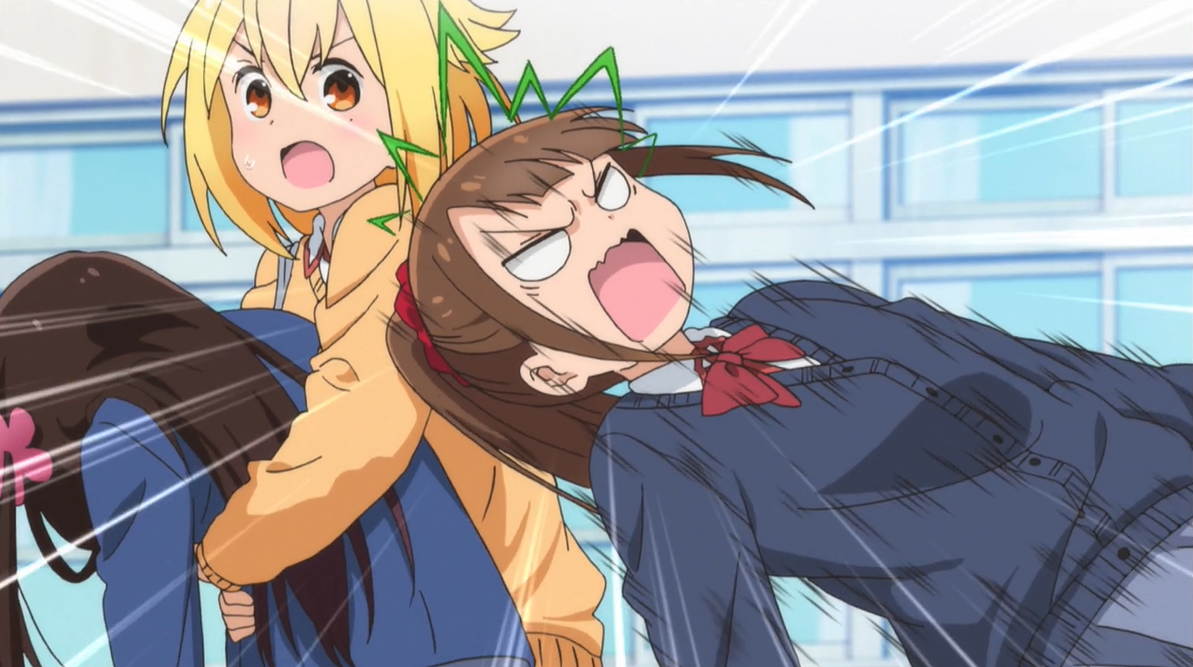 This week: info on SARAZANMAI’s production, Swery’s The Missing, and the recent lawsuit fighting for marriage equality.

A club drama with angsty pretty boys that needs to give itself space to breathe.

Buddhist deities are reimagined as pretty boys and chill out. Totally uninterested in actual concepts of Buddhism despite the premise and mostly pretty dull.

Ugly postapocalyptic action series that makes the bland male character its protagonist rather than the much more interesting psychic girl.

Should be a healing found family story with pretty likable leads but shoots itself in the foot with pedophilic dogwhistles.

More interested in making its leads look cute than like serious athletes but it’s nice to see a sport played for fun rather than as life-or-death competition.

Ikuhara’s latest is a visual and thematic feast, though it’s not clear if it can pull itself together in just eleven episodes.

Dee, Peter, and Vrai dig through a somewhat lackluster season to find the gems.

[AniFemTalk] What was your favorite Spring 2019 premiere?

Now that the dust has settled, what are you watching?

The Missing is the Story I Wish I’d Had Growing Up (Kotaku, Laura Kate Dale)

An essay on the powerful story of hope and survival in The Missing (heavy spoilers, CW: suicide).

When my biological father was refusing to acknowledge I had transitioned, and my mother thought I was being brainwashed, and I had no job, I really could have done with a video game telling me I was strong enough to push through the pain, push through the injuries, and that on the other end, someone would be there to make me feel valid as a woman.

I must give credit where credit is due. The Missing: J.J. Macfield and the Island of Memories is an incredibly brave game for Swery to put his weight behind. In Japan, where gay and lesbian acceptance is still a work in progress and trans acceptance is considerably behind that, seeing this game tackle the subject with such tact was very surprising.

That The Missing is the first mainstream video game I can think of where you only have one playable character, a trans woman, and she gets to have a happy ending, is something rather incredible.

Notes on the show’s production team and what makes this show’s process unique.

The last artist involved in that storyboarding process was Maimu Matsushima, whom we mentioned in the season preview as the latest case of Ikuhara mentoring an artist entirely new to the directorial field, out of the blue. Despite having no experience beyond key animationand a side job of illustration, Matsushima’s been appointed as assistant series director and had the heavy responsibility of contributing to the premiere’s storyboards; considering that the aforementioned Shibata was in a very similar position in Mawaru Penguindrum, it’s again easy to tell how comfortable Ikuhara’s grown with this unconventional approach that lets him mold new prospects to his liking. And as ominous as that might sound, it’s proven to be mutually beneficial! Now it’s obviously still too early to judge Matsushima’s work, but I look forward to seeing her handle increasingly larger portions of the show and her growth beyond this project.

Why Archive of Our Own’s Surprise Hugo Nomination Is Such a Big Deal (Slate, Casey Fiesler)

AO3 is not only a stunning technical and archival achievement but a landmark acknowledgement for the importance of marginalized voices in SF/F.

The values the community brings are apparent in the developers’ feminist-minded design decisions, like the amazing AO3 search system that’s based on a curated folksonomy and an army of volunteers as well as the built-in, required content warnings and filtering system that help readers both find and avoid content as appropriate. (As internet linguist Gretchen McCulloch pointed out in a Twitter thread, not only is this design a dream for archivists, but the tech industry could learn a lot from this platform that’s been sitting there in plain sight for a decade.) It also shows in the way it functions. Run entirely by volunteers, and committed to being ad-free with the help of donations, AO3 is a hugely successful online platform by any metric. It has nearly 2 million registered users, and, in a recent survey I conducted about platform use in fandom, respondents sang the praises of AO3, particularly as it compares with other platforms fans have used over time. They talked not only about how they appreciated the features of the site (though the search system really is remarkable) but also the trust that they have for the platform—trust that the site will protect their content and will have their best interests at heart when it comes to decisions about design and policy. In the current tech landscape, where we often assume the worst of social media platforms, this kind of trust seems rare. For AO3’s developers, too, their work on the platform sits in stark contrast to much of open-source culture, known to be particularly toxic to women.

“Why Do I Pursue You?”: Hikaru no Go and Implicit-Metaphorical Queer Storytelling (AniGay, Rebecca Black)

A reading of the shonen manga’s central rivals through a queer lens, and the long use of intense rivalry as a stand-in for sublimated attraction.

I refer, of course, to “rivals.” There’s nothing subtle about the “metaphor” of using the relationship of rivalry to stand in for romantic attachment; it’s a trope so common as to be cliche. But more is going on here than a simple censorship to keep the queer nature of the story implicit. I said above that the microscopic cover of implicit storytelling allows the show to avoid dealing head on with societal homophobia — but it’s here, in the complex psychological layers of coding and metaphor that the characters themselves attach to their emotions, that the recognizable and relatable effects of that homophobia show through. For those of us who grew up queer in a world that is so hostile to those feelings, not only is it easy to see through the cover to the actual emotions beneath, but it’s also specifically resonant that Hikaru has latched onto a label for his own desires that isn’t romantic. That too is a very real part of the experience of queer adolescence, poignant and familiar to anyone who has struggled with understanding and explaining (away) their own feelings.

The employee joined with a multi-industry union and will be demanding compensation for over 200 hours of unpaid overtime.

Sakakura remarked that he has heard from a lot of people that “this is how the anime industry works.” He said that he used to be told the same thing about about the teaching, vending machine, nursing, childcare, film production, and construction industries. “But we managed to improve the long hours and unpaid overtime in those industries,” he wrote. “It takes courage, but when workers speak up, they have strong power.”

“However, there’s no denying that behind this black company lies a black industry,” Sakakura went on. “Even if we manage to improve one company, if that doesn’t spread to the companies around them, then the others will just carry on thinking that honesty doesn’t pay. They’ll force the burden on smaller companies by subcontracting them for work. Workers from many different companies will need to speak up in order to change the industry.”

Half of foreigners in Tokyo have experienced discrimination: survey (Japan Today)

340 individuals were surveyed, including students.

Among them, a Nepalese man who works at a drugstore said one customer told him that he or she does not like to see a foreigner working as a cashier and asked for someone else.

There were also cases where foreigners had apartment rental applications rejected. Some said they were denied entry into stores, but none of the respondents took their case to a public office dealing with such issues.

Everyone’s Getting Married (with Aisha Soleil) (Shojo and Tell)

A discussion of the josei hit about a working woman whose dream is to get married and pursue homemaking.

Covers all of EVERYONE’S GETTING MARRIED by Izumi Miyazono

This is a josei battle of wills as our heroine (Asuka) wants nothing more than to get married and become a homemaker, while the man she’s fallen for (Ryu) is determined to never be bound by the plague of marriage. (Can’t imagine who wins this war.) Aisha Soleil of MommaLuvsManga tells Shojo & Tell host Ashley what makes EVERYONE’S GETTING MARRIED stand out among other josei fare (the feminism is strong here!) and both constantly dunk on the love rival, Kamiya, for being the worst. Aisha and Ashley also lament that there weren’t enough sexy times in this manga, even though there was a PRIME opportunity for Asuka and Ryu to show off their sexting skills. Honestly, this episode might be a little TMI. You’ve been warned.

How a mobile game is reopening a hidden chapter in Taiwan’s history (Ars Technica, Brent Crane)

The game is set during the White Terror, when political dissidents were silenced by the KMT (China’s Nationalist Party).

Though the game is not intended as a political statement, it has inevitably struck some as one. Contemporary supporters of the KMT, reports Yu, “say this game is crap.” Ted Lin, the crime novelist who wrote its storyline, says he received one angry response from a stranger online who accused the game of being too pro-Japanese. “It’s like, if you don’t think Taiwan is part of China you think it’s Japanese or something,” says Lin. “It’s completely nuts. Why can’t it be its own thing?”

One reaction to Unforgivable that has been surprising to Yu has been its positive reception in China. “We didn’t expect that,” he says. On TapTap, China’s version of Google Play, the game rates an average 9.8 out of 10 stars. “We wonder why [it’s rated so highly], because we talk about the Taiwanese democracy movement and a little bit about Taiwanese identity,” says Yu. “These kinds of political topics are forbidden in China. But I guess that’s what attracts the Chinese players.”

At a recent game show in Tokyo, Yu’s team was approached by Chinese publishers impressed by Unforgivable hoping to collaborate on other games, he adds. Unforgivable players on the mainland, Yu hopes, might notice similarities between repressive KMT agents and contemporary Chinese officials. “They can see how the Taiwanese people fought back,” he says.

A 64-year-old anime fan from the Dominican Republic shares her history with the medium.

While I have your attention, I wanted to share my beautiful fandom experience in Cuba. One would not expect a poor, socialist country to have any such outlet – but they do!!! Some of my students there (I’ve been going every year, couple of times a year, for over two decades now) love anime (One Piece, Naruto, but also some of the short-run series) even though it’s devilishly hard to get. There’s this thing called “The Package,” which is nothing more than an external hard drive that gets circulated every Wednesday with hours of content from Florida TV. You can also request content from “providers” – people who travel or have family in the U.S. and download entire series.

And there’s cosplay nights at some night clubs! Capitalism has won the battle, alas, but when it comes to anime I feel less bad.

Thread: Articles about the same-sex marriage lawsuit, which began on April 15th.

It’s a thin season for new IP, but the standouts shine brightly.