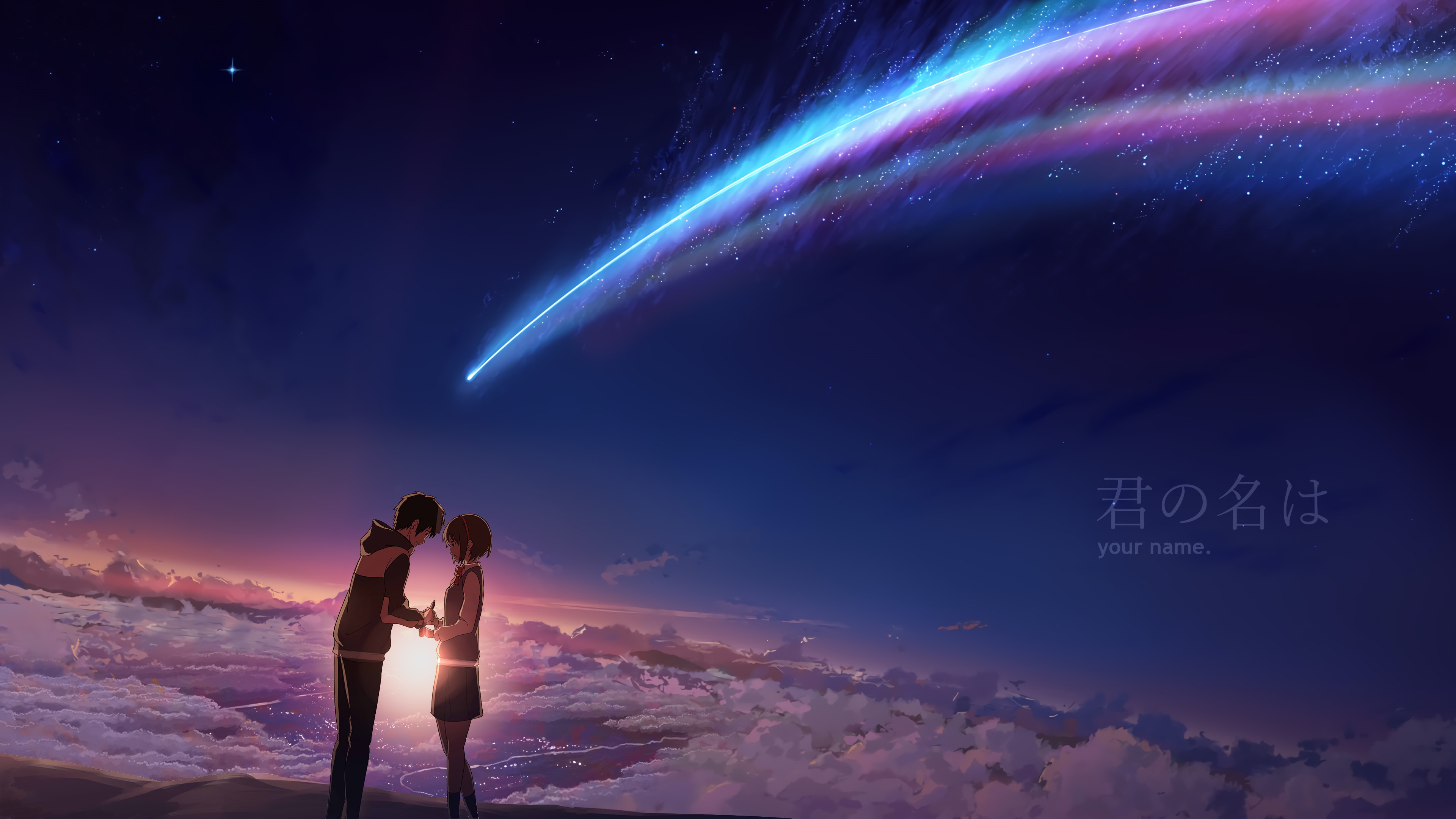 SPOILERS: This post contains mild spoilers concerning character descriptions, minor plot details and discussion of themes for “Your Name”, including major spoilers for Act II, but no discussion beyond the reveal or of the ending.

From Freaky Friday, to It’s a Boy/Girl Thing, to 17 Again, we’ve seen Hollywood do the “body-swapping” story on the big screen time after time with very little variation. December 2nd will see anime’s version of this supernatural trope hit the big screen for the first time in front of non-Japanese audiences with the international release of Makoto Shinkai’s Your Name. And not only that, but it’s a 3-for-1 special: mixing both time-travel and gender-bending components in there too.

I was lucky enough to attend an English-language screening of the film in the UK ahead of its wider release. What I was expecting to see when I went into the theatre was a fluffy, gender-bending rom-com bringing together two ‘destined’ young lovers – which I got in decent helpings. What I wasn’t expecting, though, were the progressive and fantastical twists Shinkai added to breathe new life into the exhausted subgenre.

“Body-swapping”, or “The Freaky Friday flip” as it’s otherwise known, is one of those weirdly specific tropes in pop culture that everyone the world over recognises. You take two people living oppositional lives, switch their minds into the other’s body, and voila! Awkwardness, hilarity and some fleeting ‘Who am I?’ soul-searching ensues; leaving both ‘swapees’ better off as people for having gained that ‘missing’ piece of their lives they didn’t know they needed prior to the swap.

Anime – like every other medium – has used this trope in the past for almost exclusively comedic value. And why not, too? The fun of seeing clashing personalities forced to temporarily switch lives is almost too irresistible. And for all that Shinkai does to elevate and expand upon this peculiar supernatural contrivance, he also can’t completely escape meeting audience’s expectations and falling into its familiar rhythms and pitfalls too.

Although the swapees, Taki Tachibana and Mitsuha Miyamizu, both live in Japan, their lives seem worlds apart. Taki is a high-school boy living in a cramped Tokyo apartment with his lax single father. He spends his evenings sketching, hanging out with his friends in cafes, and working part-time as a waiter in an Italian restaurant. This ordinary urban existence – unbeknownst to him – is the envy of female high-school girl, Mitsuha, who lives in the rural lakeside town of Itomori with her Grandma and kid sister. Itomori has few jobs, cafes or excitement, and Mitsuha makes no secret of her desire to escape the fate so many of its adult residents seem resigned to accept – becoming trapped there forever. Immediately the trope’s requisite for oppositional lives is established, with both parties getting their fill of whatever they were missing in their own lives. Mitsuha gleefully indulges in an independent city life brimming with opportunity in Taki’s body, and Taki comes to know the benefits of a close-knit family and falls in love with the serene landscape of the countryside in Mitsuha’s body.

There’s also the physical awkwardness that goes hand-in-hand with the gender-bending aspect of the swap, which again, Shinkai is unable to handle without complying – at least in part – to some of the sexually invasive ‘curiosity’ we’ve come to expect from this trope. The first time Taki and Mitsuha switch, they pass off the strange experience as a normal dream. A very lucid dream, but a dream all the same. Safe to say this is a realistic rationalisation. As soon as Taki looks down at his now female body, he spots a very female pair of body parts. So he decides to see how real they are. This ‘exploration’ is played off as a gag when Mitsuha’s little sister flings the door open – as is their routine – to tell her to get up, sees what she’s doing, and yells at her to stop “playing with your own boobies!” I laughed. It is a funny moment after all, made funnier by the sheer tenacity of the character. Equally funny is seeing Mitsuha, caught in the same dazed confusion, slowly reaching down to touch the new ‘thing’ between her legs, and later on paling at the idea she has to go the toilet with it.

The ‘curious groping’ thing is another staple of the gender-bending/body-swapping trope mash-up and generally a forgivable one for as long as the swap is unapparent to the swapees. The word “unapparent” is important to bear in mind here, as when Taki’s groping tendency becomes a running gag throughout the film long after the pair become aware of their sporadic swapping sessions, the initial awkward charm of the joke becomes awkwardly pervy instead. Especially in light of Mitsuha’s constant angry notes to him about “NO TOUCHING!” And, not that this would excuse it, but Taki’s fascination with Mitsuha’s breasts isn’t mirrored by any kind of sexual interest from her with his anatomy (quite the opposite, in fact) leaving us as an audience to chalk his predilection up to a hormone-charged “boys will be boys” waiver, which I will never buy as an excuse for blatant sexual assault.

Aside from this ecchi-tinged gag, both Shinkai and the dubbing actors carry off the gender-bending aspects of Your Name with a subtlety lacking from other storytellers that have tackled this trope in the past. Though their mannerisms and voices are markedly different, this difference is in smaller details rather than cartoonish exaggerations. Mitsuha injects her thoughtful but frank personality into Taki, making his body movements smaller and speaking with gentler tone of voice. In contrast, Taki makes Mitsuha more confident and impulsive, while her movements are wilder and less self-aware. There’s a definite sense of stereotypically masculine and feminine traits being channelled through the opposite gender, but what comes over stronger is Taki and Mitsuha’s distinct personalities as people, shaped in part by their individual life experiences. These differences, although interpreted as meddlesome by the other, impact positively on each other’s lives and relationships: Mitsuha gets Taki’s love-life going in the right direction, and Taki helps Mitsuha to stand up to her cold and controlling father.

One of the other more unique aspects Shinkai brings to the “body-swapping” subgenre is the fact that there’s more than one swap. In fact, there are more swaps then you can keep count of. Taki and Mitsuha swap periodically whilst sleeping, and resort to keeping digital diaries in each other’s phone to keep abreast of what the other has been up to. This also perhaps inadvertently updates the trope for the realities of romance in the 21st century. The precedent for most “body-swapping” stories is to swap two people who know and (usually) dislike each other to heighten the necessary comedic value. Taki and Mitsuha, however, start off as total strangers. Their romance, therefore, blooms entirely through remote, digital communication. And though they become physically immersed in the other’s life, the sporadic and hyperreal nature of this immersion makes it feel strangely akin to online snooping – like Facebook-stalking your crush.

Being physical strangers to one another makes the possibility of them ever being able to meet seem heart-achingly impossible, made even worse when the time-travelling twist is revealed at the climax of the second act. Usually the wedges that storytellers drive between ‘destined’ couples are frustratingly inconsequential, but with the metaphysics of Taki and Mitsuha’s romance forcing the very laws of time and space between them, the wedge in Your Name really couldn’t be any harder to overcome. Subtlety by this point is replaced by intense melodrama, the remedy of a happy ending becoming an absolute need from the emotionally over-invested audience members like myself who were by that point weeping into their winter knitwear.

Comparisons to Miyazaki have come in thick and fast from fans of the film, but to me, a closer thematic comparison would be to Mamoru Hosoda’s The Girl Who Leapt Through Time. Poignant, gripping and vibrant, though it can’t escape the problematic trappings of the “body-swapping” trope completely, Your Name certainly elevates it to new celestial heights.

Comments are open! Please read our comments policy before joining the conversation and contact us if you have any problems. Please bear in mind that many fans have not yet had the opportunity to watch Your Name; take care to avoid or clearly mark spoilers in your response.

At the time of writing our Patreon is just $87 away from being able to pay all of our existing writers! We intend to meet this goal by 31st December so we can pay all of our writers for their work in 2017, if you want to see this too then please become a patron for as little as $1 a month!

Hannah is a UK-based writer, illustrator, librarian, feminasty, Drag Race obsessive and dedicated Pokemon collector. Her work has been featured on Bitch Flicks, itcher and Standoutbooks, and she is the Co-Founder of the Fanny Pack blog. You can find her work on her website or on Twitter @SpannerX23.