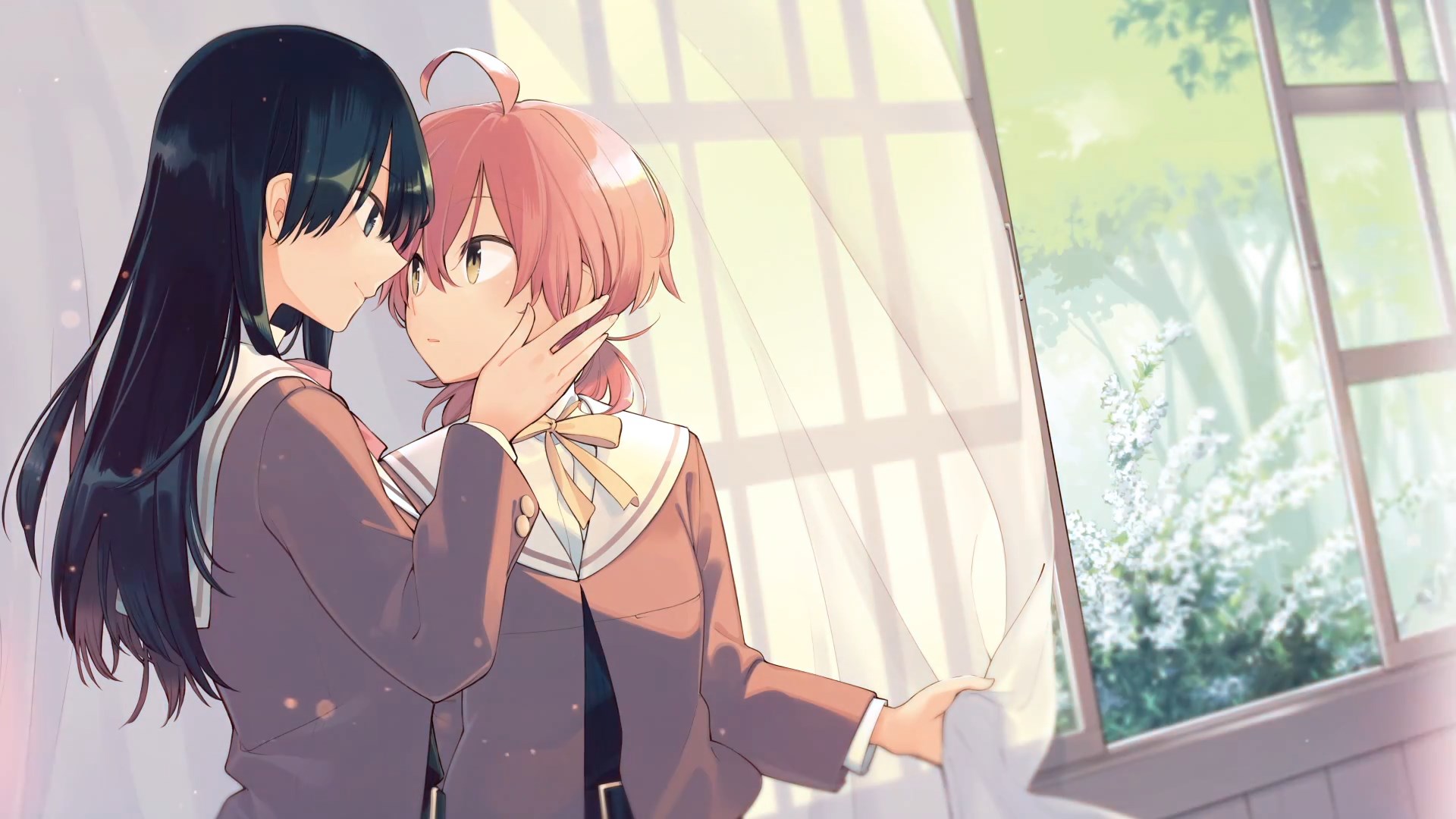 Yuri manga is an entire genre of comics about girls and women falling in love. So why is it so often overlooked by queer and feminist fans? There are several common concerns, each valid in their own right. But for me, it fulfills a desire to see romance bloom between women in a way that few other mediums can provide.

First, there’s the issue of terminology: a common misconception is that “yuri” connotates sexual stories while “shoujo-ai” is innocent romance. This probably comes from a false equivalency between the terms yuri and yaoi; but while yaoi is an acronym that does specifically refer to sexually explicit content (at least originally), “yuri” encompasses both explicit and non-explicit stories.

“Shoujo-ai” is a bit of a misnomer, by the way—along with “shounen-ai,” it’s a term that was invented by English fans, and isn’t used in Japanese fandom (if anything, these terms have a pedophilic connotation in Japanese). A more accurate comparison might be BL and GL—boys’ love and girls’ love—but “yuri” is a general term for romance between women, sexual or otherwise.

It’s also easy to assume that most yuri is created by and for men. It doesn’t help that a lot of well-known yuri anime are adapted from series in seinen magazines—so while many of them are actually still created by women (Strawberry Panic and Sakura Trick, for instance), they’re more likely to cater to the male gaze in ways that can definitely be uncomfortable.

However, this isn’t the case for the genre as a whole, especially not with manga! In fact, the majority of both readers and creators of the yuri magazine Comic Yuri Hime are female, and most of the yuri currently available in English is created by women—though most of them are (understandably) not forthcoming about their orientation, so we can’t really speculate as to whether they’re queer or not.

One notable exception to this is Kabi Nagata‘s autobiographical manga My Lesbian Experience with Loneliness, which Seven Seas is publishing starting this June; the article Rethinking Yuri by Ana Valens describes the importance of this work as a step toward reclaiming yuri manga (see also Erica Friedman’s history of yuri). There are other openly queer yuri creators too, like Akiko Morishima, creator of the manga adaptation of Yurikuma Arashi.

But probably the biggest reason yuri manga is easily overlooked is that a high percentage of it is high school romance—a setting that many people are understandably tired of at best, and at worst, is associated with the concept of “class S” romances. Historically, this kind of story (which is grounded in a larger societal concept in Japan) presents romance between girls as an innocent childhood phase, one for girls to leave behind when they graduate high school—obviously not the kind of implication that could be considered queer representation.

Luckily, while a lot of high school yuri may draw inspiration from aspects of “class S” (senpai-kouhai relationships, all-girls’ schools, etc.), most of them don’t go so far as to label girls falling in love as a phase or anything like that. Better yet, there are plenty of yuri series set in high school that show that romance between girls does carry on into adulthood, and which subvert the status quo in other ways, too.

One such series is Nakatani Nio‘s Bloom Into You. While it’s never explicitly stated, the main character Yuu is definitely somewhere on the aromantic/asexual spectrum, as is at least one other character in the series. Whether she’ll remain that way or eventually be won over by her senpai’s affections remains to be seen (and one could argue that the pressure Touko puts on Yuu can be problematic at times).

However, the fact that Touko tells Yuu that she’s fine the way she is, even if she can never return her romantic feelings, seems incredibly special to me. The series also has great side characters, including a boy who’s aromantic like Yuu, the show-stealing “rival” character who’s already come to terms with her own orientation, and later on, an adult lesbian couple who live together and give positive guidance for some of the main characters.

Aoi Hana (or Sweet Blue Flowers), an 8-volume series by Shimura Takako (who may be better known in the states for another LGBTQ+ manga, Wandering Son) that was recently licensed by Viz, is another high school manga that’s more than just the standard shoujo fare. It’s a thoughtful story that deals with serious topics (coming out, age differences, etc.) while also giving us a memorable romance. And, like Bloom Into You, it also highlights older women who share their experiences with the protagonists.

As far as more standard all-girls’ high school romances, it’s hard not to enjoy Morinaga Milk (perhaps best known for Girl Friends). Her works often have the hallmarks of any sparkly shoujo manga—romance, drama, fluff, and more often than not, a happy ending. That’s not to say that they never deal with reality, of course: characters often struggle to reconcile their feelings for girls with their previous image of themselves, and her work often highlights the gap between the students that enjoy fangirling over cool older girls and those who are actually attracted to them.

In Secret of the Princess, for instance, the main character starts dating a cool senpai to show off to her friends who are all “fans” of the older girl—only to find that, while they’re willing to fangirl over an older girl, they don’t actually think that two girls should date. In the afterword comics at the end of her books, Morinaga illustrates herself as a cat in a bow as she reminisces about her time in all-girls’ schools and her fondness for high school girls, so it’s easy to see where her inspiration comes from.

And if you’re looking for yuri that doesn’t take place in a high school, there are still plenty of options. Lesbian Experience is again an obvious example, as well as many of Akiko Morishima’s works about office ladies and other adult working women. Fu~Fu (“Wife and Wife”) by Minamoto Hisanari is an adorable slice of life about a lesbian couple living together (and the other queer women in their life, like Kina’s playgirl older sister); and Lonely Wolf, Lonely Sheep, an angsty but story about two women with the same name that also tackles topics like abuse, self-harm, and homophobia.

There’s also a wide range of one-shot stories that include even more underrepresented subjects, like bisexual or transgender characters. Unfortunately, most of these works aren’t being published in English yet; just about the only adult-centered yuri manga I can think of that are legally available in English are Miss Kobayashi’s Dragon Maid (which is actually by a male creator, but still a really fun title) and Viz’s just-announced After Hours by Nishio Yuuta. (I’m sure there are some that I’m missing—let me know if you know of any!)

This brings me to one more issue that plagues yuri manga: its legal availability in English is still relatively sparse. Still, I have high hopes that this will continue to improve, as manga publishers have been bringing over more and more yuri manga in the past few years (Seven Seas is currently the biggest licenser of yuri titles, but others like Yen Press and Viz have been getting on board too). And the best way to make sure this trend continues is to support current yuri releases and let publishers know which ones you’d like to see in the future!

It may be true that yuri sometimes falls short of reflecting an ‘authentic experience’, and can be seen largely as innocent fantasy separate from queer reality in Japan. But the genre still offers a variety of stories about girls falling in love and living happily ever—something that’s still scarce in most other media.

There are still realistic stories to be had among the idealized ones, too; and personally, I feel that there’s a place for both—that queer women (and everyone, really) should be represented in sappy romances at least as often as in painful coming out stories. Everyone has their own tastes and expectations, of course—I probably enjoy corny romance manga a little too much in general—but I’d love to see more queer and feminist fans give yuri manga a chance.

Editor’s Note: After publication, we made some slight formatting changes to this article. The content remains unchanged.

Jenny McKeon is a freelance translator whose credits include yuri manga like Bloom Into You, Miss Kobayashi's Dragon Maid, Secret of the Princess, and Hana and Hina After School (Seven Seas). When she's not busy translating, she sometimes draws comics of her own (which can be found on her website) or gushes about anime, comics, and other such things on Twitter.