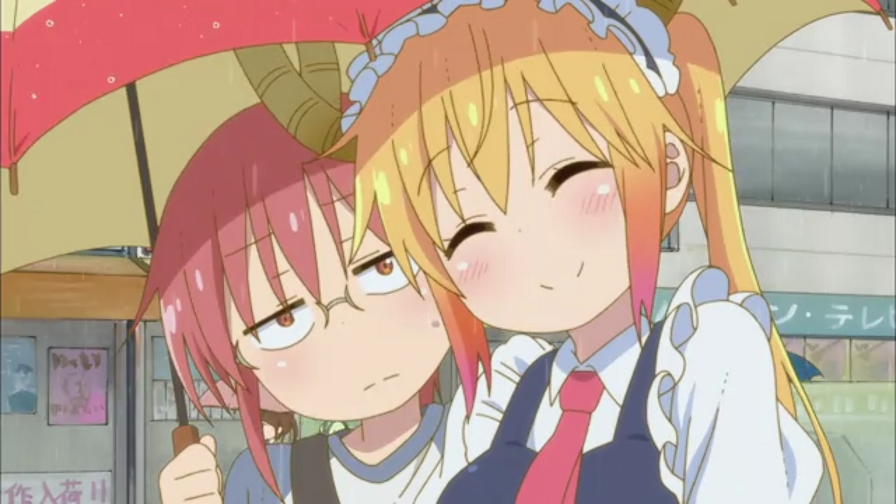 Here at AniFem we talk a lot about fanservice—no surprise, given how predominant and normalized the sexualization of (mostly female) characters is in the industry. But it’s far from a cut-and-dried issue: a boobs ‘n’ butts show about adults isn’t the same as panty shots of a 13-year-old which, in turn, isn’t the same as fetishizing helplessness.

And all of that can make it difficult to suss out grey zones like bawdy comedy or actual sex-positive content grounded in character agency. It’s easy to make a checklist and call it a day, and while everyone has their own line in the sand, those grey zones are worth exploring.

To break a bit from the usual “Versus” model, I wanted to explore three different kinds of sex-focused narrative models—exploitative fanservice, bawdy comedy, and honest explorations of sexuality—all found in a single show: Miss Kobayashi’s Dragon Maid. The series had a way of throwing things at the wall to see what stuck, and the result was uneven but joyous when it succeeded. It’s worth taking a closer look at what worked, what didn’t, and why that was.

(Also, for the sake of uniformity and time, I’ll only be focusing on Kobayashi and Tohru’s interactions. The trainwreck that is Lucoa’s subplot, as well as the often borderline uncomfortable framing of Kanna, could easily fill their own essays.)

Exploitative fanservice—the kind that’s meant to titillate the audience, sometimes creating implication through framing even if the context of the scene isn’t explicitly sexual—is one of the most common types, and one that Dragon Maid taps into right out of the gate. When Kobayashi gets drunk in the first episode and starts talking about maids, she’s quick to turn on Tohru for her dress and comportment. This then escalates to forced stripping, which is when the scene’s fanservice lens gets uncomfortable.

Tohru’s nudity isn’t actually shown in detail: the camera is positioned behind her as Kobayashi pulls off her dress, and post-stripping the shots are initially somewhat in keeping with the comedic tone. Because Tohru isn’t ashamed of being naked, we have medium shots not dissimilar from when she was clothed, and there aren’t any glistening or reddening effects applied to her skin to make her more sexually suggestive.

But it’s not just a scene about showing nudity. Kobayashi then goes on to instruct Tohru in “proper” maid behavior, saying she should cover herself and feel ashamed of her naked body (which she didn’t even choose to show of her own free will, by the way). At that point the scene becomes a layer cake of discomfort. There’s the fact that the fanservice comes from shaming a naked woman; the idea that embarrassment is an appealing trait to be exploited, as much or more than the nudity on its own; and the fact that this is all done by the one person Tohru has decided to trust.

It’s an exploitative moment with a shaming mentality behind it, and it understandably sent some people running before the premiere was even over. While the scene is ostensibly in character by way of Kobayashi’s ranting, it’s the only one between these two that uses victimization as a component of its comedy. The fact that it’s never spoken of again isn’t out of line with the rest of the show either, but it’s also one of the only truly mean-spirited moments in their relationship. Even though the trappings are thinly in line with jokes in future episodes, it couldn’t feel more out-of-place.

For the rest of the series, Tohru has agency over how she flirts and what skin she decides to show. Dragon Maid doesn’t lose its interest in sex jokes, but (at least as far as Tohru and Kobayashi are concerned) it shifts the power dynamics to Tohru willingly offering herself rather than being harassed or humiliated.

Take, for example, the pair’s day at Comiket. Once again we see Kobayashi complaining that Tohru doesn’t fit the ideal for a maid, saying she’s more like a cosplayer. This time, though, Tohru insists that she’s not just a proper maid, but a “loyal sex slave.” Not only is Tohru willingly flirting, but the camera is different, too: a mid-shot over Kobayashi’s shoulder. We’re watching this through Kobayashi’s eyes, not ogling the character in a vacuum.

Tohru is certainly designed to be attractive (“D for Dragon,” indeed), but here the scene is framed so that she’s clearly trying to show off her assets for Kobayashi, not the viewer. It feels logical for both the character and setting, and it’s free of an objectifying gaze from the camera (close-ups, exaggerated jiggling, and so on). Moreover, the point isn’t titillation but bawdy comedy: jokes that use sexuality to explore the audience’s prurient interest or potential discomfort in a culturally “taboo” topic, either to provoke laughter or thought or both.

Now, anime has no shortage of “queer character throws self at supposedly straight protagonist for supposedly comedic purposes” stereotypes. Look no further than Grell in Black Butler, Leeron in Gurren Lagann, or that travesty of a beach episode in Gargantia on the Verdurous Planet to scratch that noxious iceberg. Thankfully, Dragon Maid mostly sidesteps that trope in its romance.

The characters I rattled off as examples were all secondary or one-off characters, and part of the alleged comedy came from the absurd impossibility of their flirtation. Tohru gains a lot of advantage by being the second lead and the only person vying for Kobayashi’s affections, not to mention boldly stating her romantic interest from the get-go. That changes the tone of the show, making it not an exercise in exploitation but rather another entry in the “magical girlfriend” genre that happens to have a female lead.

It also changes the tone of the bawdy comedy in the scene I mentioned above. A magical girlfriend story typically begins with the protagonist spurning their love interest’s affections, after all, and Dragon Maid follows through on that. Kobayashi reads not as disgusted, but as first cranky and then finally tsundere, and eventually does admit how much she needs and wants Tohru in her life. As a result, Tohru is much freer in the kinds of jokes she can participate in: scenes like licking Kobayashi’s shirt or trying to cook her tail meat as a gesture of love don’t feel so mean-spirited when we know Tohru actually has a chance.

As the two grow closer and both begin to open up, the show features portrayals of sexuality that are distinct from what we’ve covered up to now: moments that are genuinely part of the couple’s growing intimacy. These scenes often contain the same raunchiness because of Dragon Maid’s comedic tone, but they actually tell us something about how the characters are coming along in their relationship with each other.

Very late in the series, for example, we finally get to see the night Kobayashi drunkenly stumbled across an injured Tohru—in other words, the meeting that led to Tohru falling in love. As the two begin their impromptu drinking party, there’s a moment where Kobayashi drunkenly demands that she be allowed to feel Tohru’s boobs. As the camera pans up to the sky, Tohru says “Sure,” and Kobayashi responds in total shock. “Huh? I can?” It’s a great little moment, showing us that for all Kobayashi’s bluster throughout the show, she’s (potentially) attracted to Tohru in addition to growing fond of her.

Kobayashi’s preoccupation with boobs is something of a running joke, but this scene feels different. At the beach or when meeting Lucoa, Kobayashi is grumbling in internal monologue while the viewer gets an eyeful of the bust in question. It reads as a pretty common inadequacy joke. In the flashback, though, the context is different: rather than talking about size comparative to her own breasts, Kobayashi wants to “fondle” Tohru, a word with sexual rather than curious or envious connotations.

And, unlike your average “girls comparing boob sizes” moment, she doesn’t do it until Tohru gives her permission. That consent changes it from “comedic” groping to a willing (as much as Kobayashi can consent, being drunk) intimacy, part of what Tohru remembers as such a monumental night that she devoted her whole being to this strange human.

Perhaps most importantly, we don’t see it at all. The camera pans skyward as Kobayashi demands and Tohru allows, at which point we skip forward to the end of the night. It’s an important enough moment that we’re told about it, but it lacks the visual slapstick that would usually accompany that kind of setup, much less the exploitation of heavy petting between women framed for a straight male gaze.

In light of all those factors and everything that led up to that moment, this boob joke tells us something important: Kobayashi’s attracted to women, and that means she really is growing to love Tohru in the present timeline, thus setting the stage for her decision to stand with Tohru against Tohru’s father. Not bad for one of the most cliché fanservice moments out there.

Depicting sexuality in media is a complicated beast. Intent, framing, tone, and characterization can all affect how it comes across to an audience—and the results can vary wildly, even within a single story. Some shows have no justification but laziness for flashing genitalia across the screen, while others can make use of sex and sexuality in intriguing or even innovative ways. It’s worth having that conversation, in all its complexity—and celebrating the surprise successes when they come along.

Special thanks to Dee, who was an enormous help with this one.