In November 2017, Nobuhiro Watsuki was arrested for the possession of child pornography. Shueisha responded by suspending publication of his Rurouni Kenshin sequel. This isn’t the first time a Shonen JUMP author has been arrested for crimes involving underage girls.

In 2002, Mitsutoshi Shimabukuro was arrested for violating laws against child prostitution. He had met up with a 16-year-old girl via the internet and allegedly paid her for sex. He did so giving a false occupation, and he admitted to doing the same thing on prior occasions (the source is in Japanese; it refers to Shimabukuro being charged for paying three girls of high-school age).

Shimabukuro’s manga in Weekly Shonen JUMP, Seikimatsu Leader den Takeshi!, was canceled, and his two-year sentence was suspended in favor of a probationary period. During that time, he was not confined, but supervised with the understanding that any criminal activity during that time would result in the original sentence being carried out (a common practice when it comes to sexual offenses, which are charged in Japan at the discretion of prosecutors).

In 2004, after that probation period had passed, Shimabukuro was hired back for a new series, Ring, which ran in Shueisha’s Super JUMP magazine. In 2008 he began serializing his biggest success, Toriko (2008-2016), this time back in Weekly Shonen JUMP proper. Since 2016, he’s been publishing one-shots on a fairly regular basis, all in various JUMP magazines.

All of these are facts, available via public documented sources.

Unlike Shimabukuro’s previous manga, Toriko saw some overseas success through an official translation released by Viz Media. It received an anime from Toei Animation, and that anime was officially licensed and translated by Funimation. All the while, this sentence sat there on his English-language Wikipedia entry: “In 2002, he was arrested and convicted of violating child prostitution laws, including paying a 16-year-old girl ¥80,000 to have sex.”

Like that sentence, I’ll be referring to Shimabukuro’s actions as “sex” instead of “rape” to forestall complaints that I’m implying the act was violent and forcible*. Yes, what he did was consensual in that both parties agreed to it. However, no one under the age of consent is capable of giving informed consent, and that age, counter to a lingering misconception in the anime community, is well above 13 “in Japan.”

While the age of consent is set nationally at 13, prefectures generally have youth protection laws defining anyone below 18 as unable to legally give consent. In Kanagawa, the location of Shimabukuro’s arrest, article 31 of the Kanagawa Prefecture Ordinance for the Protection of Youths (1951) forbids “lewd or indecent acts” with youths, defined under article 7 as anyone below the age of 18.

With regards to prostitution on a national level, The Child Welfare Act (1947) and the Law for Punishing Acts Related to Child Prostitution and Child Pornography, and the Protection of Children (1999) both define anyone below the age of 18 as a child.

An adult lying about his identity and paying these girls money for sexual intercourse is fully aware of the fact that what he’s doing violates the law. I’ll admit that when you’re setting up sexual encounters with strangers over the internet, it is possible to end up with someone lying about their age. However, Shimabukuro admitted after his arrest to having done the same thing on previous occasions. The fact that he was aware of this makes it clear he knew what was going on and was intentionally seeking out these girls based on their age.

In 2017, Shimabukuro drew a short comic detailing his longtime friendship with Eiichiro Oda. Their friendship was always public knowledge, and only became more obvious with the release of some official crossover episodes, illustrated and animated, between One Piece and Toriko. One Piece is the most financially successful manga of all time, and the honor of an official crossover is shared only by another Shonen JUMP legend, Dragon Ball Z (#2 on the list of top-earning manga).

Shueisha, Toei Entertainment, Viz Media, and Funimation are all currently taking money and using it to pay Mitsutoshi Shimabukuro, a man with a public record of seeking out underage girls for sex. Eiichiro Oda, author of the hugely successful and venerated manga One Piece, is openly friends with this man. Every last part of this is publicly available information, yet there’s been little public outcry and few lasting repercussions for any of the involved parties.

Nearly sixteen years after Shimabukuro’s arrest, how much has changed? Under current laws on the possession of child pornography, Rurouni Kenshin author Watsuki faces either a sentence of a single year or a fine of “up to” one million yen. When that year ends, what happens to a living legend whose name has meant big money for Weekly Shonen JUMP?

Is it going to be the same thing that happened to Shimabukuro? Shimabukuro’s sentence was suspended and he was rehired by the same company that fired him. His next manga has been even more financially and critically successful, and his friends can publicly support him without fear of repercussions. Other than a few online jokes, he’s suffered very few consequences.

I’m not breaking any news with this essay. I don’t have any explosive scoops or exclusive interviews. I’m just asking when enough is enough.

In the wake of all the allegations and scandals that have emerged from the US entertainment industry in the past year, it should be clear to anybody willing to listen that it never stops at just two or three. When a serial predator faces no lasting consequences, getting busted once is not enough to stop them.

But that hope is tempered by years of reality. Shueisha was applauded for responding appropriately to the revelations about Watsuki, and I would love to believe he’s going to face lasting consequences for his contributions to victimizing children. But when Shonen JUMP’s track record both in Japan and the US involves letting men slide back in after a scant year or so of punishment for permanently traumatizing minors, how can we believe this commitment to punishment will last any longer than the public eye is upon them?

And make no mistake, girls and women do read Shonen JUMP—according to Nikkei, they make up about half the readership. The use of One Piece‘s popular and beloved characters in those crossover stories amounts to free publicity, selling Shimabukuro’s projects to a wider audience of these teenagers; selling them to parents shelling out money for volumes of Toriko written by a man whose interest in their daughters goes far beyond drawing stories for them.

The sales from Takeshi funded Shimabukuro’s payments to three underage girls. He should not have been given a second chance.

Creators of fiction have the unique ability to essentially present themselves to the public as their work, and when they get caught behaving badly, they can trade on the affection we feel for that work. But we can never truly know someone based on their creative output, nor can we allow our love of fiction to outweigh the human cost of allowing predators to keep doing whatever they want.

When we let predators slip back into the mainstream after a slap on the wrist, it tells other predators what they can expect if their crimes ever come to light, and it tells victims that they’re less important than drawings on a page or movements on a screen. And as it stands, it’s difficult for consumers of manga and anime to vote with their dollars and avoid companies that don’t punish predators because Viz, Funimation, and Shueisha control such a huge portion of the market.

What we do have now is the ability to make our voices heard as a group, and the beginning of a cultural shift. We’re finally beginning to see the unraveling of decades of silence and complicity in Hollywood—and we have the chance to start chipping away at what’s lurking elsewhere, too.

The manga industry has an opportunity to start handling scandals firmly, by shutting out sexual predators of all stripes, instead of sweeping their crimes under the rug and giving them their jobs back. And we, as readers, are in a position to ask this of the publishing companies and hold them accountable. Maybe then they will finally listen.

This is a situation where we had no good options.

To call it rape does, as the author says, risk the conversation being derailed by an insistence that we are distorting the story. In addition, from my personal perspective in a country where 16 is the legal age of consent, it also removes agency from the sex worker, though that is in itself a problematic term for someone below the age of consent, muddied further by the fact that sex work via ‘compensated dating’ (akin to ‘sugar babies’) is a known issue affecting high school girls in Japan… Needless to say, it’s complicated.

What’s not complicated, however, is that Shimabukuro knowingly and repeatedly committed rape. To call it sex risks the implication that we do not believe this, or that we believe statutory rape to be in any way less serious. Needless to say, this simply isn’t the case.

All we can do is make our position clear through context, which I believe the author did. Over the entire piece, the author explains why they opted for the term ‘sex’, why its use is still a problem, how consent is impossible in that situation, provides referenced context for consent laws in Japan, describes his predatorial behaviour, and literally calls him a predator. I feel like that achieves as much as using the specific term ‘rape’.

However, I appreciate that not everyone will agree with me, and fully acknowledge that those who disagree have valid points. The fact is that there’s no risk-free way to talk about this one, so given the detailed paragraphs surrounding it we went with the author’s preference. If you would like to comment on this decision, please feel free to let us know. 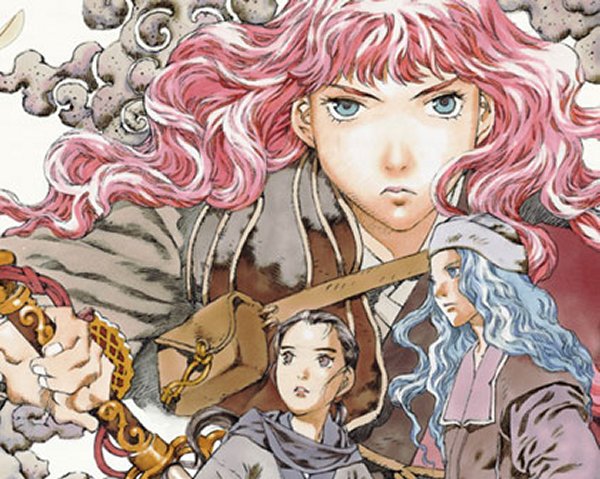 No One is Born to Be a Slave: How The Twelve Kingdoms questions social systems

Fantasy is often described as escapism, but the genre has great potential to expose a reader to different perspectives on their own society while drawing them into an exciting new world. The Twelve Kingdoms novels by Fuyumi Ono truly show this. The world of the Twelve Kingdoms is a masterful example of a fully developed, politically complex, colorful and varied fantasy world. 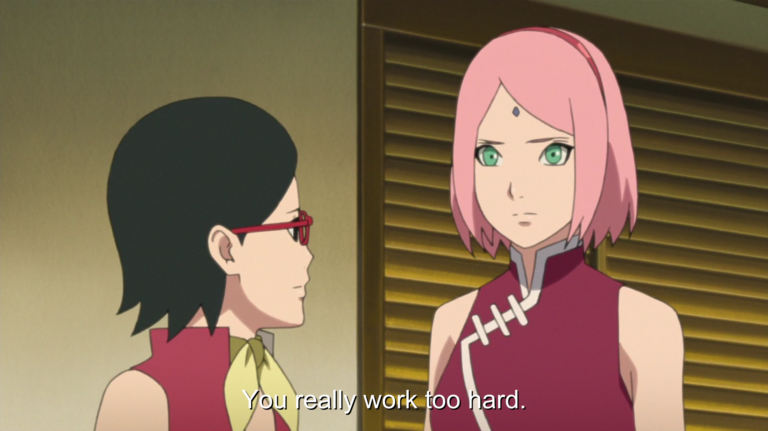 What happens to shounen action heroes when they grow up? How should a hero and his friends live after getting everything they ever wanted? Boruto: Naruto Next Generations looks at the lives of its heroes as adults raising families, depicting them as falling along traditional gender lines.