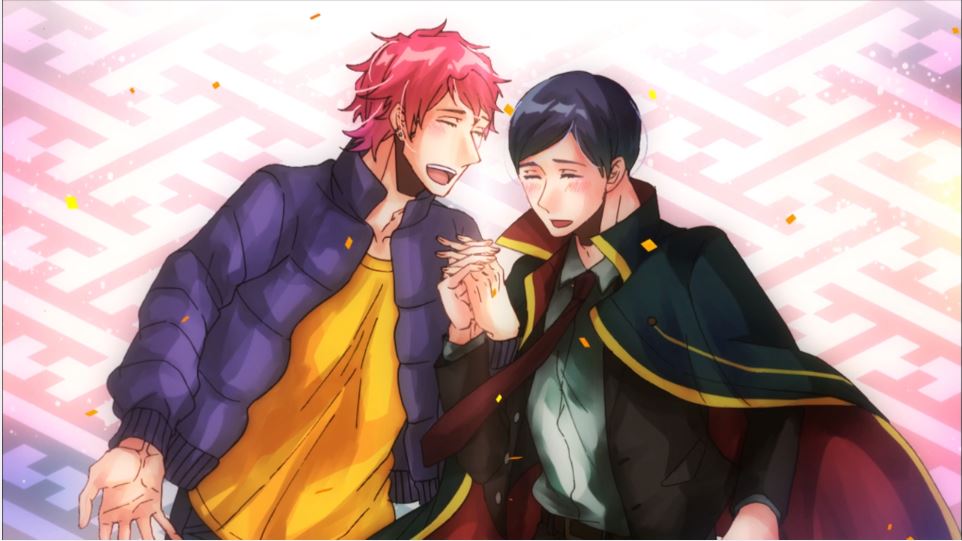 Yamamoto Soubi is a wunderkind who could fit right in as an anime protagonist: premiering as a director at just 20 years old, Yamamoto hit the ground running and hasn’t let up, becoming well-loved among fans of indie BL for her This Boy… series of OVAs. She describes herself as trying her hand at a little bit of everything, from manga to radio dramas and movies, but ending up in anime because “[it] was the only thing I managed to properly finish.”

Almost always working on a project—she calls herself too busy to consider romance, though admits that she “likes cute girls”—Yamamoto is one of the few anime directors who could truly be called an auteur. With one major exception, she’s been the director, writer, storyboard artist, and primary animator on all her projects.

Yamamoto nods toward three major influences on her work: the works of Makoto Shinkai, particularly Voices of a Distant Star; BL manga; and the sekai-kei sekai ron genre (in fact, the genre provides the name of her very first short). Sekai-kei is a somewhat fluidly defined genre, but Yamamoto discusses it like this:  “I do enjoy sekai-kei works where only a ‘you’ and an ‘I’ exist and the world comes to an end around those two, and really think that they’re beautiful.”

Taking elements from these sources, her works tend to focus on streamlined narratives with a limited number of characters, methods of communication as a major narrative element, and the focus on a romance often against a disastrous or cataclysmic backdrop.

The last is most true of her short projects, which are thought experiments focusing on things like “robots who’ve learned to love but don’t realize” (“Robotica Robotics”) and “a DJ walks a small planet inhabited by only six people, each preoccupied with either communication or world-ending cataclysm” (“Ra / Radio Noise Planet”).

While these short films are not available online, they were bundled with the DVD release of her 2011 OVA debut: This Boy Can Fight Aliens, which focuses on a young man (Arikawa) charged with being the handler of the single person (Kakashi) capable of fighting the alien invasion. It fits the basic format of sekai-kei–with a heavy dose of shonen pastiche–but Yamamoto is also interested in subverting the genre.

While the typical sekai-kei paints the personal as all-consuming and society at large on the verge of collapse (Evangelion is often listed as an example), This Boy Can Fight Aliens ends not with despair but hope. Moreover, while the story pushes toward Arikawa and Kakashi as an item, it’s the amnesiac Kakashi remembering his past life and all the friends who care about him that gives him the strength to go on fighting the seemingly endless invasion. Yamamoto’s This Boy stories work toward bursting the bubble of “you and I,” emphasizing that while romantic love is grand, a full world is what grants happiness.

2012’s This Boy Caught a Merman touches on similar themes, painted with the usual lush colors and heavily present on-screen text that characterize Yamamoto’s aesthetic. After his grandfather’s death, an accident leads high-schooler Shima to cross paths with a merman (Isaki), who comes to live in Shima’s home (or, more correctly, a kiddie pool in Shima’s living room). It gives the two an opportunity to become close, but when Shima begins to make more friends, Isaki ultimately feels trapped just waiting around at home for Shima, unable to live a life of his own.

A crucial part of the pair being able to achieve a happy relationship is each of them having a space where they can live and thrive when they’re not together. While an intense intimacy gives the characters a chance to know one another and gain insight necessary for healing, it’s not enough.

After that first infatuation, love is only a part of the tapestry. Despite her stated admiration for the streamlined nature of many BL stories (which often only feature the couple and one or two other characters), Yamamoto always places emphasis on the importance of social support.

Her next project is easily the odd one out on her resume: in 2013, Yamamoto was asked to step into the role of series director on slice-of-life comedy Meganebu! This is the first time Yamamoto worked almost solely in a directorial capacity, aside from some storyboard work on episode 1 and 4, and her discussion of the series is comparatively detached and light-hearted.

She talks about approaching each episode as an opportunity to tackle a different stylistic genre, and when asked what makes the series special:

I look forward to seeing them moving and talking! Well then, finally, is there anything we should pay particular attention to while enjoying MEGANEBU!?

…I have to say glasses (lol)! People who love glasses will have lots of “I’ve been there” glasses moments, and people who weren’t previously interested in glasses, I hope you see the good and the fun of glasses!

Glasses. I don’t know what else to focus on but glasses (lol).

Their friendship or their youth, maybe?

Those things already exist in other anime; I think by definition, MEGANEBU! is all about glasses (lol). From the first episode onward every character who appears really does wear glasses, so keep that in mind and please do enjoy!

Around this time Yamamoto also directed an audio drama in the This Boy… series, titled This Boy is Called a Bad Man. It was also collaborative, with Ayumu Hisao writing the script. It’s the only entry in the series to feature a female protagonist, and like most audio dramas was never officially localized.

After that burst of collaboration, Yamamoto returned to work on another mostly-solo project with 2014’s This Boy Suffers from Crystallization. A play on the Japanese saying that when one doesn’t know what to say they “turn to stone,” it follows a high schooler (Tamari) who does just that every time he gets anxious. Tamari’s only friend is his homeroom teacher, Onihara, a man who’s poured his heart into geology after his lover left him.

While the crystal imagery is well-suited to Yamamoto’s visual palette and Tamari’s anxious inner monologue is well-depicted, this is nonetheless one of series’ weakest offerings. The story does its best to work around the inherent inequalities in a student/teacher romance—Tamari is a senior and older than his classmates due to being held back, and Onihara refuses to date him until he’s graduated. But it still feels somewhat absurd to watch a teenager suffering with a physical illness put himself in danger to comfort a grown adult who’s sad he got dumped.

It would be two years before Yamamoto debuted her next work, This Boy is a Professional Wizard, which is the first in the series to be aired on television rather than direct-to-video. The longer production cycle results in the best entry in the series to date, and also the most personal-seeming one.

While it can be a mistake to assume works of art are direct insights into the mind of their creator, it’s often the case that an artist’s body of work will show patterns and recurring themes over time, giving an indication of what interests them. This is especially true of auteurs, due to their direct control over multiple elements of production.

Yamamoto’s work frequently returns to themes of anxiety about self-worth and living up to expectations. In Professional Wizard, the titular wizard Chiharu is prone to chronic health- and relationship-destroying overwork and an inability to delegate tasks because he’s been praised for his talents from an early age and now believes his magic is the only thing he’s valued for. It’s kind of hard not to look at that, and the fact that Yamamoto hasn’t yet created a follow-up to Wizard in contrast to her previously intense production schedule, and ask, “Are you doing okay?”

That aside, this is by far the standout in terms of writing and pacing. It’s only a minute or two longer than the other stories, but it communicates a full sense of Chiharu’s adult life and struggles and makes smart use of montage to build a sense of growing stress or developing relationships without feeling cheap.

It’s also the most visually rich. The previous OVAs tended toward cool colors, often settling primarily in blues or greens and letting brighter shades pop in for emphasis. But Wizard’s primary color is red—burning orange-reds of natural disasters, true red for magic usage, and warm violets for intimate conversation. It’s a striking departure, and it pays off.

Choosing to frame the love story around two adults who are feeling out the beginning of a relationship also makes better use of the limited timeframe, rather than having to truncate many months of time together offscreen. It means that we’ve essentially only seen a mutual confession by story’s end, but it gives us a much better chance to understand the couple-to-be’s dynamic and what draws them to one another. However long Yamamoto decides to take before announcing her next project, this is one she can be proud of in the meantime.

During an interview with NHK WORLD for Crystallization, Yamamoto expressed interest in someday doing yuri, and described her interest in queer romance: “Heterosexual romance often comes with a lot of future expectations like marriage and so on but homosexual stories are somewhat separate from that, I really like boys love romance in particular because it’s often portrayed as pure and straightforward love stories. I think that’s very romantic.”

In some ways it’s a statement characteristic of a problematic undercurrent in BL—the idea that these are fantasy relationships that don’t correspond to lived realities. At the same time, the idea of “purity” does come through in Yamamoto’s stories. Her characters are crushed under the weight of social and familial expectations, loss, and self-doubt. And the key to freedom from those worries is embodied in another person, a fantastic encounter that gives the protagonist the courage to accept himself and reach out to others.

They are intensely personal stories that, while strongly influenced by social pressures, are distinct from social institutions. In other words, they’re definitely fantasies, but the fantasy is “wouldn’t it be nice to not be constantly crushed by what society expects me to be.”

The end result is something that can certainly appeal to queer audiences looking for a break from stories about the relentless grind of societal oppression as well: fluffy stories that by-and-large avoid tired seme/uke dynamics, are actively consensual, and end in happily-ever-after. The fact that Yamamoto, in the same interview, indicated that she herself is not straight also helps soften the blow, if not erase it completely.

Beyond the unique qualities of their production, a big part of what makes Yamamoto’s stories so compelling is their softness. While the majority of BL series that make it to anime form tend to be the ones that feature heavy amounts of sexual assault, child grooming, and fetishization, the This Boy stories are about lonely people finding support, family, and a partner they can talk to and trust. For anyone interested, all four stories are available across HIDIVE and Crunchyroll (CW in Aliens for flashing lights).

They’re extremely G-rated fare, which needn’t be what every BL story aspires to, but their sincerity and respect for both characters and audience make them a treasure of the medium. Here’s hoping Yamamoto is well and that she does wind up taking a crack at a yuri story at some point in the future.