A light season means a light recs list, but we still found a few goodies to share with our readers. Here are the team’s picks for the 2019 Spring season.

We talked about three kinds of recommendations:

The titles below are organized alphabetically. As a reminder, ongoing shows are NOT eligible for these lists. We’d rather wait until the series (or season) has finished up before recommending it to others, that way we can give you a more complete picture.

Here’s what the team thought—let us know your picks in the comments!

What’s it about? Considered “monstrous” and locked away for years, the young weretiger Atsushi at last attains his freedom and joins the supernatural Armed Detective Agency in an attempt to help others and “justify” his own life. The story follows him and his fellow detectives as they tackle threats both local and international, meeting a variety of “powered” people all named after real-life literary figures.

Bungo Stray Dogs is a fantastical action series stylishly directed by Takuya Igarashi (the other Sailor Moon alum flexing his muscles this season), dynamically animated by BONES, and packed to the point of absurdity with superpowered characters loosely based on literary figures, from Akutagawa to Fitzgerald to Dostoevsky. Also, there’s incest and suicide, sometimes comically portrayed; some well-developed, badass ladies doomed to play second fiddle to the lads; and enough BL shipteasing to sink a freighter.

All of which is to say that Bungo Stray Dogs is the latest flawed entry in my favorite shounen subgenre—what I like to call “Fightin’ Boys With Feelings.” If I squint, I can sort of pretend it’s progressive because it technically challenges unhealthy ideas about masculinity (boys/men not being able to express their feelings or have emotionally intimate relationships with each other), even if I suspect all this is done mostly for the sake of emotional fanservice and slashfic fodder. I love this subgenre very much, but my feelings about it are decidedly complicated.

And yet, for all its pulpy issues, Bungo Stray Dogs is also a story about an abused, self-loathing young man trying to find a future for himself and helping others do the same. Atsushi is the heart of the show, and Bungo is at its best when focusing on him and his relationships with the cast.

The series addresses that abuse imperfectly, mind you. It doesn’t forgive the abuser and it wants to help Atsushi heal, but there’s a fine line between “sometimes you have to find ways to draw strength from horrific experiences in order to move past them” and “it was actually a good thing this happened to you,” and the series struggles to fall on the right side of that line. I read it as the former, but I could see other viewers reading it as the latter, which is a serious concern.

Nevertheless, it is perpetually sincere, and at times downright moving. Bungo is messy and self-indulgent, but it also has an earnest emotional core that pushes for its battered characters to come together as a family and find a healthier way forward, seeking to save instead of destroy. Complicated personal feelings and all, I figure that’s worth a problematic fave rec.

What’s it about? All through elementary school, Bocchi’s only friend was Kai. When it turns out they’re going to different middle schools, Kai gives Bocchi a challenge: they can’t be friends again until Bocchi has made friends with every person in her homeroom class.

Hitoribocchi is the gentlest of comedies, the kind of school story that lovingly pokes fun at its characters while always sympathizing with and humanizing them. It’s quite silly, featuring fairly broad archetypes with quirks like “secretly a disaster” or “wants to be a ninja,” leading to plenty of solid humor. At the same time, though, there’s an emotional authenticity to its characters’ stories and arcs that grounds it, allowing it to resonate with middle-grade viewers and adults alike.

Protagonist Bocchi is often a spot-on portrayal of anxiety—getting nauseous at the thought of greeting new people or speaking in front of class; fretting that her friends will forget about her if she’s been away for longer than a day—but the series handles it with a light, optimistic touch. Bocchi is never shamed for her difficulties with social situations, and she does slowly grow and gain confidence, thanks in large part to her supportive friend-group.

So often “cute girl” comedies let themselves get too saccharine or stumble into infantilization or fanservice. Hitoribocchi avoids these pitfalls, leading to a sweet, upbeat experience that’s a pleasure to watch each episode. If you like soothing comedies, this one’s an easy recommendation.

What’s it about? Three 14-year-old boys—Kazuki, Toi, and Enta—accidentally release the Prince of the Kappas from a statue… only to anger him and wind up as kappa themselves. Now they must work for the prince, defeating kappa zombies by removing their shirikodama and obtaining “plates (sara) of hope” to help make their own desires come true.

It’s nothing short of a miracle that SARAZANMAI lived up to the expectations placed on it. As the first series directed by beloved auteur Kunihiko Ikuhara since 2015’s flawed (but very lovable, fight me) Yurikuma Arashi and the first work in which Ikuhara would specifically be telling a story about queer men, hopes were high indeed.

I’m lying, it didn’t meet them. It crushed them. I haven’t felt so happily anguished and giddy waiting for a weekly anime since A Place Further Than the Universe, nor so thoroughly seen since Land of the Lustrous. This is the kind of show that reminds me why I write about anime for a living and the dazzling heights of creativity that are unique to animation.

Over eleven short episodes, SARAZANMAI touches on the difficulties of adolescence; the complicated pain of both familial and romantic connection; the commodified exploitation of kink; and the way that entrenched power structures exploit queer people while insisting they’re there to help, turning the marginalized into upholders of their own oppression. It accomplishes all this with a plot that looks the anime industry dead in the eye and says, “Hey, it’s kind of messed up that queer couples in mainstream anime aren’t allowed to say ‘I love you,’ huh?”

It’s also riotously funny and weird, with an intensely endearing and relatably flawed cast (Enta is great; again, I invite you to fight me). And for those intimidated by Ikuhara’s reputation, this is easily one of his most accessible works, sometimes sincerely (each episode title is essentially a thesis statement) and sometimes tongue-in-cheek (having the main villain sing “I am an abstract concept,” which is of course the villain in every Ikuhara series).

And it’s a musical. And it has one of the best English dubs I’ve heard in years, with both a clever localization and a super-talented cast. And it made me cry, like, a bunch. There won’t be another show like this.

What’s it about? In his previous life, Shin Wolford lived an unfulfilling existence as an ordinary office worker in modern-day Japan. One day he gets hit by a truck and reincarnated in a world where magic exists. In his new life, his foster-father Merlin is a powerful wizard and he himself is brimming with magical potential. When he turns 15, he’s officially a fully-fledged adult… but he knows nothing about his new world!

While the bar may be notoriously low for the isekai genre, Wise Man’s Grandchild is commendable and enjoyable by itself by avoiding many of stereotypical tropes played up in similar settings.

No “this is just like a video game!” moments here. Shin Wolford treats his memories of his past life as more of a quirk than the defining feature in his new life as a teenage magical hero, and there is hardly a concept of “skill points” and “EXP” in sight. The setting goes so far as to have an even more egalitarian approach by showing that anyone with a modest aptitude for magic can become incredibly powerful given the right training and approach to magic.

My biggest criticism with the series was that the initial half focused mostly on how Shin is so overpowered. Despite an ensemble cast, much of the story centered on Shin being way more powerful than anyone else around him. The second half of the cour, however, showed off how his classmates, though still not as powerful, were more than capable of growth and action.

And that is where the show really shone for me. Although the cast is in awe of Shin’s power, they do more than fawn over him. Being able to see them take an active role really turned things around. Though, I will warn, the drawback of having more characters in focus meant the story also spent more time focusing on the girls in the series with camera work blatantly dedicated to appealing to the cishet male target audience.

Still, if you can get past the fanservice, Wiseman is a surprisingly fun way to spend 12 episodes. Anyone hungry for an isekai with a strong ensemble cast that’s relatively free of the recent pitfalls of the genre should give this one a try.

Our two-week recommendations extravaganza comes to an end with the staff’s Best of 2019 list! 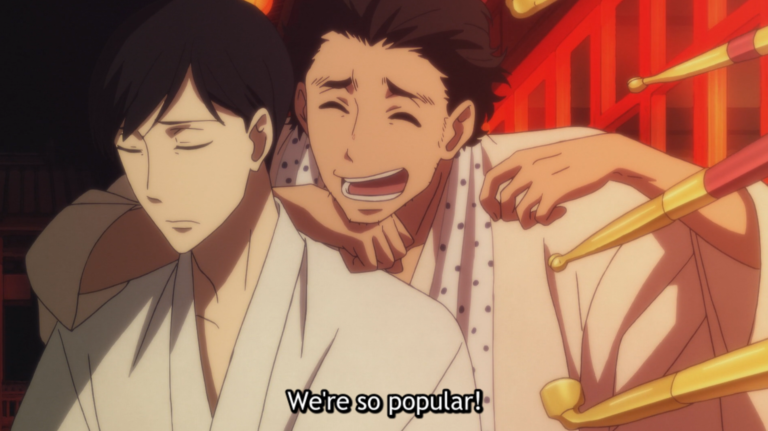 The Roaring Twenties are right around the bend! Before we turn that corner and leave the Turbulent Tens behind us, we wanted to lavish some love on the standout titles of the last ten years.