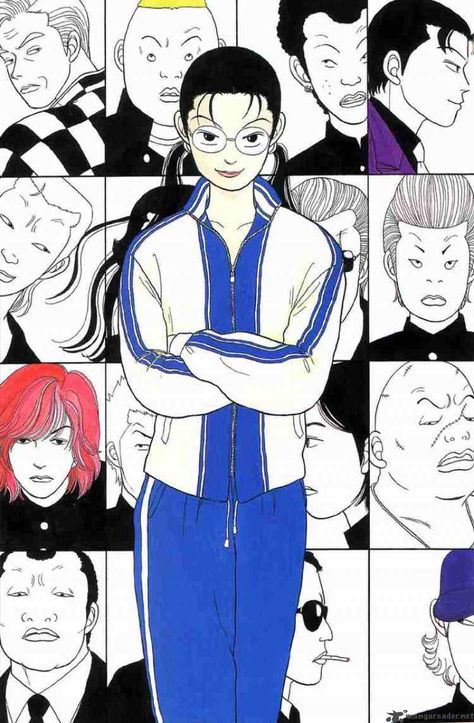 Gokusen, a manga about a gangster-cum-teacher and her misfit students, features a lead who regularly beats up rivals with fists as opposed to magic, displays solid common sense, is guided by traditionally honorable gangster values, and is a woman.

Her characterization in ink is one of the boldest and most unconventional portrayals of women I’ve seen, not only in manga but in fiction as a whole. Undermining stereotypes at every turn, her very existence is a finger in the air to the patriarchy.

However, as the story was told and retold in other forms of media, its sheer audacity was intentionally dismantled and sterilized. Despite being a hardened gangster in the Gokusen manga, protagonist Yankumi was stripped almost entirely of her gangster characteristics when translated to J-Drama. Her re-characterization allowed the J-Drama to play on gender expectations for laughs without ever challenging the common perceptions that the manga so merrily ignored.

In both the manga and the J-Drama, Yankumi’s family plays a central role in the story. Her grandfather, the Third Generation Head of the Kuroda yakuza group, is aging. Due to that, one of the plots that runs through both versions is “who is going to take over for Kuroda Ryuuichiro?” The two renditions of the story then handle the ongoing struggle for succession very differently.

In the manga, it’s explicitly stated that the Kuroda family only has daughters and their future husbands are expected to succeed when the current head passes away. Even when she isn’t particularly thinking about the implications of it, Yankumi makes it clear that she doesn’t mind this. Her mother wanted out, but she and the all-around do-gooder that she married died in a car crash when her daughter was seven, leaving Yankumi to make her own choices about her grandfather’s legacy.

When the manga begins, Yankumi’s grandfather has come to terms with the idea that his granddaughter might want to leave the kumi like her mother. He planned to divide the family and end the Kuroda line with him, but Yankumi wants to both pursue her teaching career and fulfill her duties to her family and the yakuza. She cannot picture a life outside of the Gokudo. It’s the life she was raised in and raised for by men who loved her like a daughter.

Those men are in such abundance that Manga!Yankumi almost trips over gangster father-figures. Most notable is Ooshima Kyotaro. A live-in when seven-year-old Yankumi came to live with the gang, it was his job to look after her. It is Ooshima Kyotaro—not Yankumi’s parents, not her grandfather, not the man who may-or-may-not be her biological father and occasionally gives her ukeleles—who raises her, teaches her how to fight, and makes her undeniably a gangster in her own right.

For that is who she is. Make no mistake: Manga!Yankumi is a gangster.

In the J-Drama, Yankumi is not a gangster and wants to leave the world of yakuza. She worries about leaving her grandfather without real plans for succession, but ultimately she’s squared abandoning her family and the kumi with herself and with her grandfather. This makes her more palatable to a wider audience, but also bears the message that a sympathetic female character cannot be an active participant in gang activities (as opposed to the multitude of stories about male gangster protagonists, such as Fudoh: The New Generation and its sequel, Gambler’s Farewell).

Almost more pointed is the absence of any real father-figure for Yankumi.  The J-Drama removes Kyotaro entirely, leaving Yankumi only with photos of her dead social worker father to measure her life by and to aspire to be like.

She knows who her dad is and she wants to be his daughter, regardless of whether anyone else may have stepped up to the plate. Even if he isn’t there, she’s still made to look up to and feel indebted to her biological father, rather than the men who truly raised her.

With only her grandfather to tie her to the Yakuza, J-Drama!Yankumi has more to draw her away the kumi than to bring her to it. Viewers can wholly approve of the direction her life is heading.

In both versions, a significant portion of the story is also devoted to potential love interests. As mentioned above, the Kuroda family in the manga passes the title of “family head” on to the daughter’s husband.

Why can’t they just let the daughter have the title? The characters themselves occasionally ask this question in regards to how perfect Yankumi would be for the role. But they also recognize that she has other interests, and whether she stays in the gang or not, it would never be the sole subject of her attention. So they decide to stick with a tradition invented in the 1930s.

They lay their hopes on whichever man she chooses, as they have for the prior three generations. The Kuroda gang trusts their heiresses to have a general “type,” and for that type to be “honorable gangster.” They aren’t wrong: considerations of succession are part and parcel with Yankumi’s love interests, and they overwhelmingly fit the bill.

The first of her options in the manga is her family’s young lawyer, Shinohara. Yankumi has a long-standing crush on him, but when he decides to return to both the straight-and-narrow and his hometown, she refuses to go with him. This demonstrates that Yankumi wants to stay as she is, where she is, and eventually play a role in the leadership of the Kuroda group.

Sawada Shin, the second love interest, is the actual romantic lead. Throughout the series, his advances go largely ignored by Yankumi. By the end, however, they have formed a rock-solid, almost-platonic partnership that will clearly become less platonic in the future. The relationship is problematic in that he is one of Yankumi’s students (yuck), but the gang begins to root for the relationship as Shin increasingly proves himself to be an ideal gangster. By graduation, Shin has decided to become a lawyer and take Shinohara’s place in the Kumi.

It’s true that the context of the manga and the comments of other characters put a rather oppressive expectation on Yankumi’s romantic choices. However, even carrying that burden, Yankumi proves herself unwilling to take part in a relationship she doesn’t actually want.

When asked to enter into a marriage of convenience with an allied gang’s heir, she stakes the engagement on a fight and proceeds to beat the crap out of him. In a fashion that Brave’s Merida could only hope to achieve, Yankumi fights for her own hand, even when she accepts that her love interests will have to meet certain criteria.

Meanwhile, in the J-Drama, Yankumi takes after her mother. Her choices in men serve not to bind her to her family, but to remove her from it. A man by the name of Shinohara remains her first crush, but the character is vastly different. Instead of being a defense lawyer, he’s a cop. In the long term, she can’t choose him and remain in the Kumi. The same is true of Shin, who has a diminished role in the J-Drama and has no desire to be a gangster.

Yankumi knows all this, and her choice is one of the many that distinguishes J-Drama!Yankumi from her manga counterpart. J-Drama!Yankumi is actively making decisions that carry her further from her yakuza family.

In the exception that proves the rule, a yakuza live-in named Tetsu pines after Yankumi. Though his manga counterpart sees Yankumi as an older sister, the J-Drama makes him a man who represents the life she wants to leave. It’s consistently apparent that Tetsu’s affections for his “ojou” will remain both unrequited and the butt of many jokes.

Another significant change is the quality of Yankumi’s friendships. Originally the music teacher, Fujiyama, quickly becomes Yankumi’s best friend. As the only woman around Yankumi’s age that she’s able to really interact with, Fujiyama helps alter Yankumi’s yakuza-tinted perception of women.

Having once had a student of hers attempt suicide, Fujiyama fiercely cares for her students. Determined to never actually lose a student to suicide, she has a bright internal strength that even Yankumi doesn’t recognize at first.

But throughout the manga, Yankumi learns to look beyond Fujiyama’s pretty face (and massive breasts). The two become fast friends. It’s a poignant reminder to the reader not to judge a woman by her external appearance—a lesson not frequently explored in manga. Their friendship is stronger for it. Eventually, Fujiyama learns of Yankumi’s yakuza background, and she isn’t angry because of it—she’s angry because Yankumi never told her.

J-Drama!Fujiyama is magically transformed into a shallow pretty face and the object of Yankumi’s jealousy. Her character arc makes no mention of the past student that attempted suicide or her subsequent journey of self-discovery, nor do Yankumi and Fujiyama ever gain the friendship their manga counterparts enjoy.

Instead, their relationship consists of backhanded compliments and petty behavior with a bare hint of underlying affection. They are reduced to stock frenemies. As in so much other media, this move derides the power of female friendship and paints women as scheming and petty—except for the too-good-for-this-world heroine, of course.

All things must come to an end, and so too does Yankumi’s secret double-life. In both versions, Yankumi’s students find out she’s part of a yakuza family. But while the manga holds her accountable for her lies, depicting her students as feeling angry and betrayed (before eventually forgiving her), the J-Drama paints her as a victim that her students must rally around to “save” from unfair discrimination.

In the manga, the main cast questions the heroine’s morality. Her actions throughout the story are examined and put to the test. In the J-Drama, viewers are only allowed to see the heroine as a paragon of goodness. It reduces her complexity and avoids asking real questions about women and the moral standards society ascribes to them.

In multiple ways, the female characters of Gokusen were altered to fit certain faux-moral standards to grace the live-action screen. From the role the main character plays in her family to the dynamics in her social life, Yankumi’s softened J-Drama reimagining prevented the show from breaking any real ground.

Yankumi is inspiring in both iterations. Her fighting skills and sense of honor are legendary on both page and screen, but the altering of her other attributes allowed the J-Drama to fit her character within parameters set by traditional gender and fiction norms. While the original remains as unconventional as when she was first put to ink, the change in format forced Gokusen’s Yankumi into a much narrower box.

K. Vasquez-Braun is a Writing, Rhetoric, and Discourse student. An aspiring librarian, she can be found attempting to showcase diverse media at work.