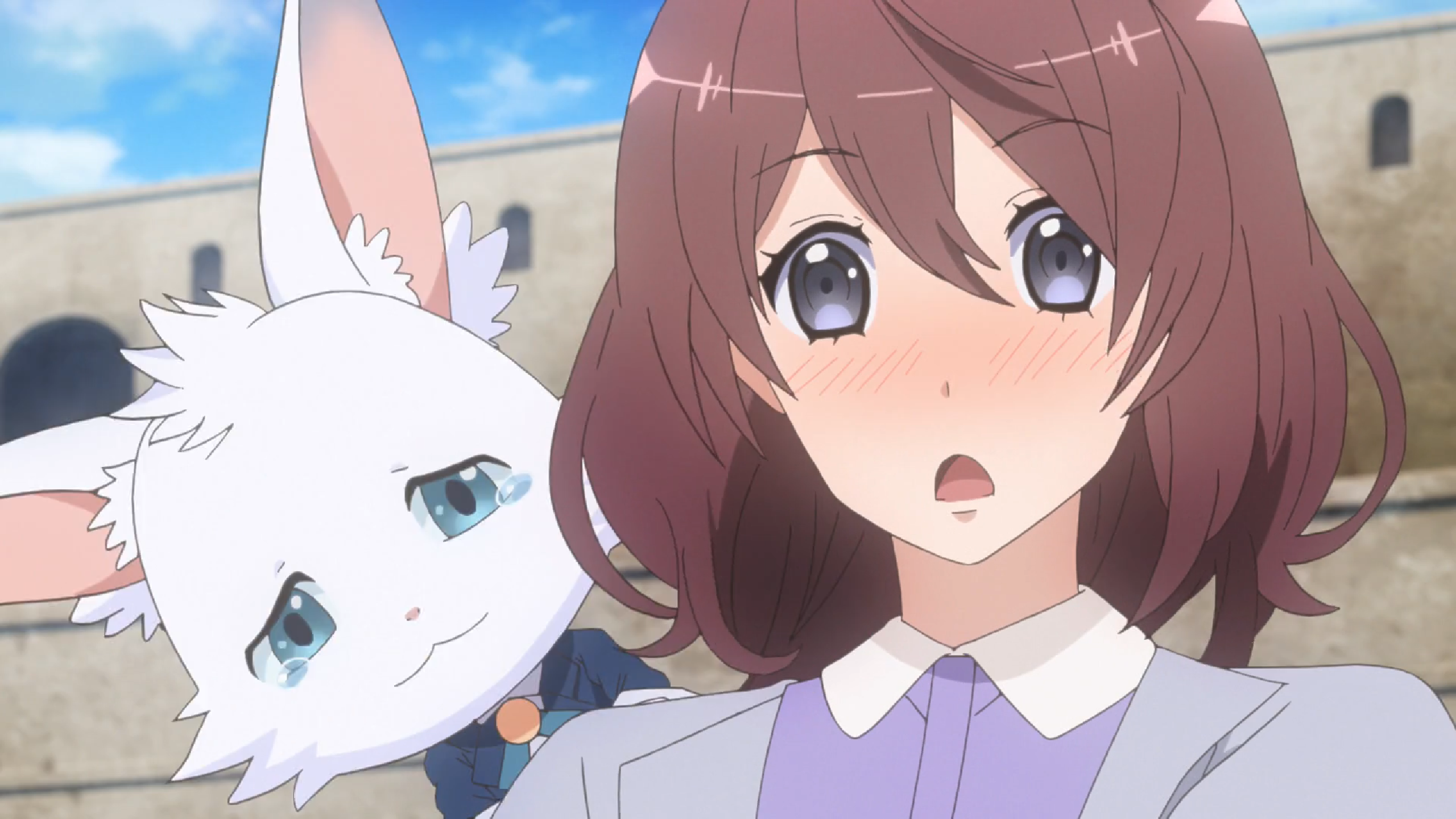 What’s it about? A young woman wakes up in a new world, greeted by a rabbit-like creature. This creature introduces himself as Navi and tells her she is a princess of this dream world. She must defend the world against the dream eaters, malicious creatures that prey on this world’s people and killed her parents when she was just a young girl, causing her to be thrown into what we know as the “real” world. She must awaken the sleeping princes from their rings so that they can defeat the dream eaters.

Yep, it’s another anime based on a gacha game. This one, unlike The Thousand Musketeers, only has one hundred handsome men here to save the day, which seems like a much more manageable number. It’s better to have only a hundred quality handsome men (a paltry sum) than ten times as many mediocre handsome men, right? Quality over quantity, I always say.

If all this sounds a bit absurd, that’s pretty much because it is. Anime are getting shorter, but the number of characters is getting higher, so there’s not much time for them to do anything besides appear, catch the attention of the players who like them, and maybe spout a few lines. Remember back in the day when four-to-five was the standard number for pandering bishounen shows, like in Gundam Wing and Weiss Kreuz? Their personalities may have been silly and superficial, but at least you didn’t lose track of who they were.

Okay, I hear you all yelling, “Go back to bed, Grandma.” And I will go back to bed, right as soon as I finish writing this review. But fine, I’ll put away my cane.

All that said, 100 Sleeping Princes and the Kingdom of Dreams isn’t actually that bad. The art looks pretty nice, and the princes are handsome. The two so far, Avi and Kiel, have a fairly cliche “opposites forced to get along” dynamic.

Avi spends a lot of time scowling and complaining, but he gets the job done; Kiel’s resourcefulness comes at the cost of him never taking anything seriously and always cracking wise. Neither is a particularly interesting character, but they’re certainly pretty to look at. And thus far, there’s only two of them, which makes it possible to create a more nuanced personality than a few wisecracks and off-model looks at the camera.

The heroine isn’t going to win the show any awards for feminism, as is more-or-less expected in these sorts of self-insert series. Heck, she doesn’t even have a name yet. She does win points for being a working adult, rather than a teenage girl, because that shows she’s at least a little bit capable. It also adds an extra layer to the wish-fulfillment angle, since we get to see that her life can be well and truly difficult, albeit in a mundane way, like getting pressed against the window on her commute or struggling at her job.

The “sudden princess” narrative a la Jupiter Ascending offers a fantastical explanation for always feeling out of place. It’s a different kind of wish-fulfillment than the sort of isekai you see more these days—instead of coming to another world and instantly being powerful or desired, it tells young women who never quite fit in that maybe there’s a reason. It’s an escape fantasy, not a power fantasy, and I’m not going to shame the people who enjoy them. Escapism is important, especially nowadays.

Of course, it would have been a bit nicer if she were more capable (or if she had a name). She does her best, bless her, but her best just isn’t very good. When she tries to help out, such as using a ginormous axe to separate Avi and Kiel when they’re chained together, she pretty much just makes things worse and gets yelled at for her troubles. Maybe it’s room for character growth, or maybe it’s to ensure the heroine (seriously, why doesn’t she have a name?) is a helpless damsel who needs to be rescued by the boys.

With harems these days, it’s go hard or go home. Everyone’s gotta have a gimmick, and sometimes that gimmick is more numbers than anything else. While The Thousand Noble Musketeers seems like it offers a better value for your money, 100 Sleeping Princes offers a better bang for your buck.