What’s it about? As a child, Azumi survived the interdimensional war between humanity and the Z/Xes, only to almost succumb to a mysterious illness. Years later, she wakes up in a tank to find a Z/X being named Rigel standing before her. She agrees to become Rigel’s partner to survive. Now they’re off to a special school for humans who have partnered with Z/X, but it seems like earth’s peace with the other dimensions may be short-lived…

On the plus side, that means it doesn’t do anything exceptionally awful. Sure, there are a few impractically skimpy outfits, a shot of a girl running that lovingly animates her swinging boobs, and the implication of a flat-chested girl being jealous of another girl’s chest size. I ain’t saying Z/X is void of your garden-variety Anime Bullshit.

But the fanservice is sporadic instead of constant, and the camera mostly maintains a matter-of-fact distance and angle; more clinical than leering. It keeps walking right up to the fire alarm, setting a hand on the lever, and then changing its mind and walking away again.

Z/X seems unwilling to commit to much of anything, honestly. Instead, it’s content to hang out in the land of safely calculated “cute girls fighting stuff” tropes, up to and including all the usual signs of yuri shipteasing. The main girl Azumi keeps gazing longingly at her Z/X partner Rigel and thinking about how beautiful she is, but then quickly refers to her as her “friend,” a fact the ending song is quick to reiterate.

Maybe Z/X will surprise me and actually do something with all the romantic vibes between the two leads, but this sparkless premiere leaves me doubtful. Everything about this episode feels vaguely manufactured, including the central relationship. It’s the sense of a committee sitting at a writer’s table and going: “Okay, how can we get these nerds to watch our show so we can promote our card game to them?”

I didn’t know Z/X was based on a card game going into the episode, mind you, but it showed its hand pretty much straight away. Between the rapid-fire world-building and the equally rapid-fire introduction of a slew of one-note characters (including Cat Girl, Girl With Sword, and Child With Doll), I left feeling more like I’d just watched a 22-minute commercial than the beginning of a proper story.

Which is a shame, honestly, because there are the bones of something at least reasonably entertaining here. Azumi is a frightened but determined survivor who entered into a partnership with Rigel to save herself from an illness. Rigel seems to be something of a rebel among her people, as she refuses to go inside her Pokeball card device and bluntly tells Azumi that she won’t be helping her fight any of earth’s enemies.

There’s a shady council governing the school the two just started attending, and the school immediately gets attacked even though the worlds are supposedly at peace now. The episode ends with Rigel trying to protect Azumi by summoning a big ol’ space gun—and Azumi getting injured despite her efforts.

Describing it, it sounds fun. This could be fun.

But, alas. Just like how Z/X never quite drives me away, it also never quite pulls me in. The uninspired production, awkward infodumps, flat character introductions, and perpetual sense of calculated marketing forever hold it at arm’s length.

Basically, Z/X is the celery of anime premieres: mostly tasteless, slightly bitter, and leaving me feeling hungrier than I was before. Some people like celery, and power to them. But if someone asks me to point them to a show about heavily subtextually gay girls fighting aliens, I’m much more likely to direct them to Symphogear than this. 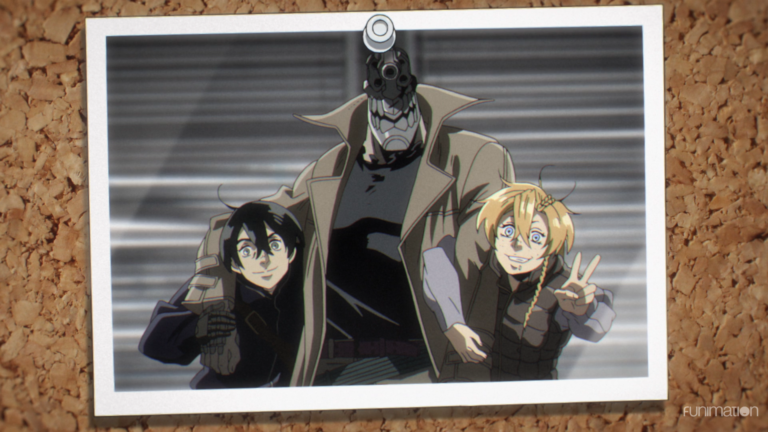 While the writing could stand to take itself a little less seriously, this is a surprisingly good throwback to 2000s-era mashups of noir and cyberpunk. 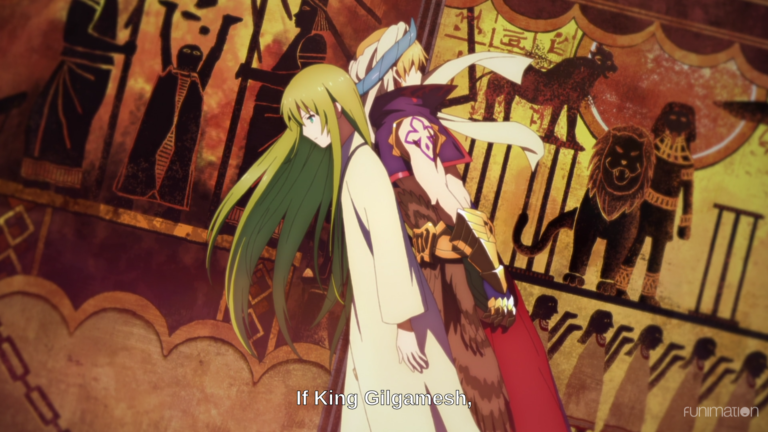 If I were coming into Babylonia completely fresh, I don’t know if I’d want to continue after this. But I do, because I want to see a different side to Gilgamesh.