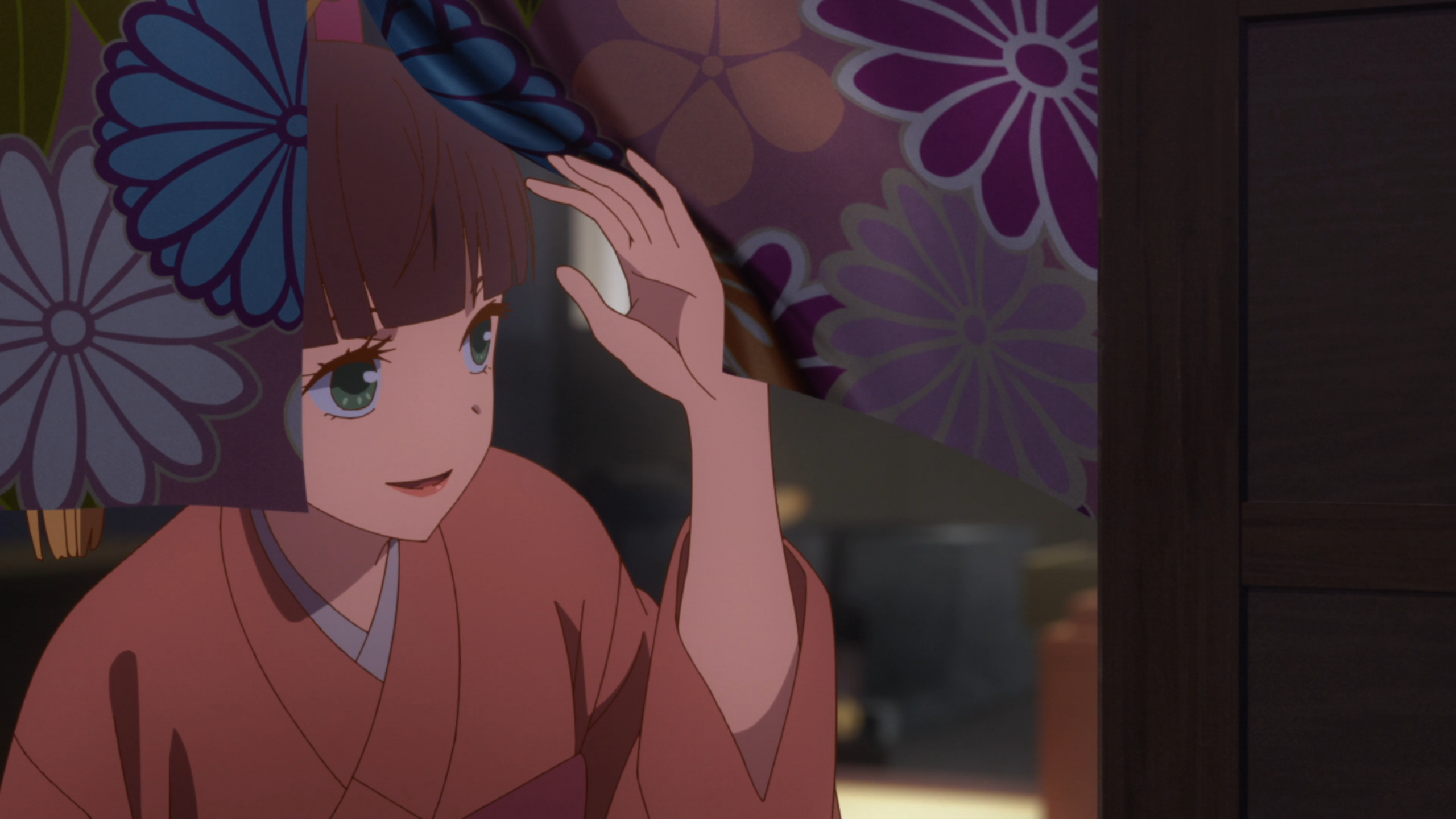 What’s it about? In Edo-period Japan, siblings Okou and Seiji run the rental shop Izumoya, but they’ve also gained a reputation for solving problems and mysteries (many of the supernatural kind). This is thanks to their collection of tsukumogami—old, cherished objects that have become deities over time—who can see and hear what others might miss.

We Rent Tsukumogami is a historical fantasy based on Shinto-inspired Japanese mythology. It has cute spirits, a great aesthetic, and fun facts about daily life in Edo. It is so squarely in my wheelhouse I was halfway around the bases before I even pressed “play.” So why did this first episode leave me lukewarm?

What stands out the most about Tsukumogami is that it looks really, really good. The bright color scheme and use of abstract shapes in the architecture and clothing designs give the series an energetic, retro-modern look, inviting the audience into a world that’s one half-step removed from historical reality.

Flashbacks use shadows to great effect, creating a sense of uncertainty about the events being described and casting doubt on the truthfulness of the speaker. Lighting, decor, and camera angles help each location breathe with its own unique life, as if it’s not just objects but also places that develop a personality over time.

The character designs are both true to the time period while also feeling fresh and contemporary, particularly the tsukumogami’s spiritual forms, which are clearly informed by modern kawaii aesthetics. And, while the animation is limited, it’s all quite fluid, and there’s even an impressive chase scene in a brothel that really pops. I enjoyed looking at Tsukumogami an awful lot.

The actual content is less delightful, unfortunately. This premiere covers a lot of ground, introducing the major players (both human and tsukumogami) while also cramming in an entire mystery story full of missing curios, familial politics, and engagement woes. The end result is that it’s tough to feel fully grounded in the world, with everything moving at such a quick, disjointed pace, and the central mystery and client conflict ring emotionally hollow.

Happily, though, that’s only half the story. The episode is quite charming when focused on the tsukumogami, particularly Notetsu, a bat netsuke with abandonment issues. Tsukumogami is based on a 2007 novel by Hatenaka Megumi, so it’s possible this first episode wanted to rush through the early material so it could take its time with the later stories.

If, going forward, it gives its mysteries some room to breathe while also continuing to develop the relationships of its central cast, this could settle into an engaging sequence of stories. But it isn’t there yet.

Outside of its rushed pacing, Tsukumogami has a pair of… maybe not obstacles, exactly, but story elements whose efficacy will vary by viewer.

The first is that (as is often the case with anime based on novels) it’s very talky. The majority of the premiere is either a group of people sitting in a room discussing something, or one person providing exposition via monologue.

This adaptation works hard to maintain an active camera and show the audience what it’s telling them, but that Sherlock Holmes-style narrative structure is still very much present. There are a lot of explanatory speeches in here, which will either work for you or it won’t.

As part of that structure, there’s also a somewhat intrusive narrator-voice who pops in to explain historical tidbits (like what a netsuke is). At the same time, though, the episode as a whole seems to assume its audience will be familiar with common Edo-period cultural practices (arranged marriages, adult adoption, courtship rituals, and so on).

This is the second element viewers may struggle with: Despite its retro aesthetic, Tsukumogami‘s story seems firmly rooted in the Edo era, and thus far doesn’t seem interested in commenting on that from a modern perspective.

For example, there’s much ado in this episode about how the Izumoya’s client, Katsusaburou, was forced into an arranged marriage against his own wishes. Neither he nor his bride-to-be Sanae are excited about it, to the point where she’s even involved with another man.

This initially feels like a critique against the arranged marriage system (a common occurrence in modern fiction)—but then the episode’s resolution is “Well, Sanae’s boyfriend is also in an arranged marriage, so you should be nice to her and learn to be happy together.” Katsusaburou suddenly makes peace with his situation and goes home content.

There’s a narrative style employed by some writers that attempts objectivity or moral distance. It basically boils down to “I’m going to present conflicts, and different characters will have different opinions about them, but the narrative itself won’t take a stance on them.” Sometimes it can be an effective tool to encourage the audience to confront their own prejudices or question preconceived notions, while other times it can turn a story into one long shrug emoji.

I appreciate that Tsukumogami doesn’t shame or vilify Sanae for having a lover (in general, the female characters are treated quite well here), but I worry that the overall narrative suggests complacency or defeatism. It’s as if the writer’s answer to her characters’ problems was simply “Well, that’s how it was done in those days, so what can you do?” It gives the audience a window into a different time and culture and provides them with something to chew on, perhaps, but it’s probably not what many contemporary viewers would consider a satisfying conclusion.

This sense of “presenting Edo from the perspective of the time period” also extends to our two main human characters and Tsukumogami‘s most troubling element. Okou and Seiji are “siblings,” but they’re not blood relatives, and Seiji very clearly has romantic feelings for Okou.

Now, adult adoption was a fairly common practice during the Edo period (especially if you needed a son to take over the family business), so my assumption is that Seiji was brought into Okou’s family as a teenager. Based on the tone and events of this first episode, I doubt Tsukumogami is trying to tell a lascivious “forbidden love” incest story or completely ignore the Westermarck Effect. I’d say it’s more likely the series wants to explore a (mostly) discontinued social practice and the complications that could arise from it.

But. Also. Like. We don’t live in Edo-period Japan, and neither did the writer of the source material. The fact is, Tsukumogami is very likely going to feature a romance between two people who are legally siblings. I’m not going to fault anyone if that’s an automatic deal-breaker, regardless of context.

As with Holmes of Kyoto, though, if you can get past the troubling romantic undertones, We Rent Tsukumogami has the potential to be an episodic mystery series that’s quite pleasant to look at and will teach you some fun facts about Japanese history and mythology along the way. Between the two, I’d give the nod to Tsukumogami—there’s a bit more meat on this one, and the fact that it’s based on a novel suggests a proper arc and conclusion. I didn’t love it the way I wanted to, but I still plan to give it one more episode to see if it can hook me.

Dee is the Managing Editor at AniFem. When she isn't vanquishing passive sentences and rescuing Oxford commas, she spends her free time devouring novels and comics, watching far too much anime, and cheering very loudly for the Kansas Jayhawks. You can read more of her work at The Josei Next Door or hang out with her on Twitter @joseinextdoor.