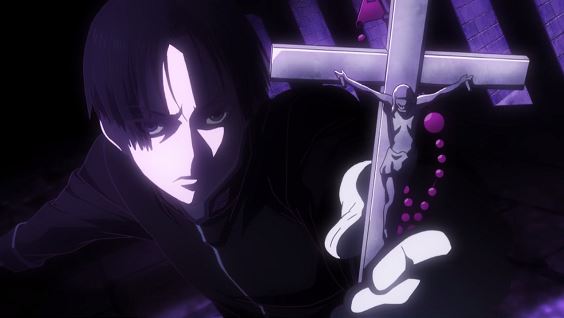 To detect lies, refuse fakes, and reach the miracle of God – that is their mission as Vatican Miracle Examiners. Hiraga, a scientific genius and Roberto, an expert on the decryption of cryptography and ancient documents are not only good partners but also “Miracle Examiners” working for the Vatican. They are secret examiners, who are requested to examine and identify the authenticity of miracles from all over the world.

In the ’90s and early 2000s, there was a subgenre of (usually) shoujo that I like to call “Catholicsploitation.” Whether they were series that liked the aesthetic of Gothic fiction without necessarily grasping the deeper themes that tradition sprang from, or just liked the mysterious visual appeal of an extremely minor religion in Japan (‘sup, Anno), surface-level use of crucifixes, demonology, homoerotic boarding schools, and starched white collars were kind of a thing for a while. Y’know, your Hellsings, your Godchilds, your Angel Sanctuarys, that one arc in Descendants of Darkness, and so on (seriously, how have we not had a Vampire Chronicles anime?).

I adored those series. Maybe as a Gothic fiction fan, maybe as someone who was raised Catholic, or maybe just because I have a soft spot for anime reinterpretations of western culture. They tickled a certain something in my soul, and I was rather sad when the trend trickled off. Which is all to say that Vatican Miracle Examiner has teleported forward from 2005 and was made specifically for me. It is stupendously tacky and also I am in love with it.

In what I can only hope becomes a seasonal trend, I’m not entirely sure this is a “good” show. There are some good things in it, I suppose—a few nice uses of violet in a mostly muted color palette (which sometimes crosses from “muted” into “dark and hard to tell what is happening”), a few moments of effectively used tension and a solid murder mystery hook—but mostly it’s just delightfully bombastic.

There are children’s choirs singing ominously. There’s a totally unironic use of “Ave Maria” on the soundtrack. There’s a horizontal rain of stigmata blood stylized  to look vaguely like rose petals. There is the most moment-killing laughter I have ever heard. There are swooping camera shots around a giant, poorly rendered CGI crucifix. The credits seem to contain actual footage of Vatican City with an anime character layered over the top. A statue of the Virgin Mary cries—but just regular tears, though. This show has restraint. It also includes a disclaimer, this time included by the anime itself, but honestly it’s kind of too ridiculous to need it (unlike the ass-covering included after the fact on Altair).

For those who require slightly more than utter shamelessness to tempt them, the plot is solid enough. Hiraga is clearly the more central protagonist of the pair, practically screaming “I am going to be traumatized in the future.” He blinks downright Bambi-like at his partner (I can’t promise homoeroticism, but if I were a betting sort…) and proclaims something “won’t let him let go” of his faith in God, though he’s a student of “reason and logic.” That “something” appears to be the desperate need to believe that if he faiths hard enough, his little brother’s bone cancer will be cured.

Between his downright aggressive piety and the closing moment where the church they’re investigating responds to a discovered murder scene with YOU BETTER NOT CALL THE COPS, the kid might as well have Crisis Of Faith written in red pen on his forehead. Though there do also seem to be actual demons in this world. Possibly. Maybe. The horror-tinged tone would like you to think so. As for Robert, the “requisite head taller” one, he… used to go to a boarding school? Presumably he smooched some boys there. That’s all I got.

The initial hook of a proclaimed immaculate conception (that’s heavily implied to be a Rosemary’s Baby sort of affair) could be the subject of an arc or the season, depending on how they want to spin the deepening conspiracy. Which reminds me: it’s worth saying that this type of show, for all its campy joys, has a real bad habit of treating women as either evil or disposable, the better to feed the latent homoeroticism in keeping with the most garbage of BL traditions. The fact that the primary women in this episode are “mad waif” and “obviously evil nun who bites down viciously on helpless phallic symbols” respectively doesn’t inspire a ton of confidence.

Some folks might also find the show hard to take given its initial depiction of the Vatican as a Swell, Upstanding Organization. Though the plot seems keen on undermining that assumption and tearing away the protagonists’ rose-colored glasses (if not faith itself? it’s unclear), it would still be quite understandable if folks found it an uncomfortable sit.

It’s a real shame no one will be able to watch this beautiful vintage trash, what with it being on Anime Strike and all.