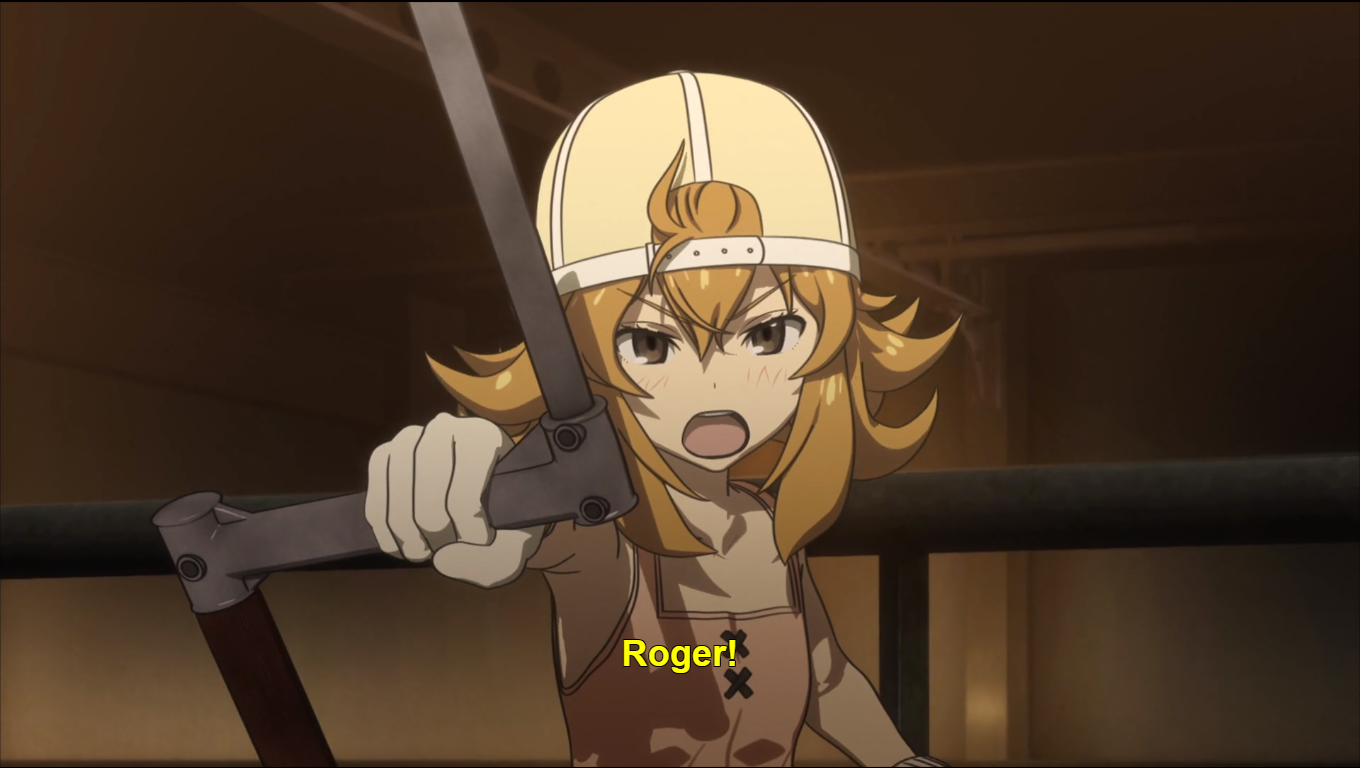 What’s it about? The freelancers of the Kotobuki Flight Squadron are the best there is, flying missions normal air squadrons can’t handle and taking orders from the mysterious Madame LouLou.

If you wanted a series about cool aerial dogfights this season that isn’t a love letter to the JSDF, The Magnificent KOTOBUKI might be what you’re looking for. Helmed by the same director (Tsutomu Mizushima) and series composer (Michiko Yokote) as SHIROBAKO, it’s a dazzling adventure series with major promise in its cast.

The premiere gets off to a somewhat rocky start with its opening scene in the bar. The content is perfectly fine—while I find “competent female professionals have to prove a point to sexist dudes” (rather than just going straight to them being awesome) a rather tired conceit, the establishing dialogue between the main characters is lively and engaging.

The trouble is that the opening shots are of the line-drawn male characters and backgrounds, which sets visual expectations for the audience. So when the scene switches over to the CG-modeled women of the Kotobuki Squadron, they wind up feeling like unnatural outsiders when we’re meant to be on their side. It is downright jarring to see them in the same shot as the line-art characters, and it makes them seem stiff and exaggerated. It’s an extremely poor choice of an opener.

It’s also not very indicative of the episode as a whole. Once the pilots get into their CG planes, the reasoning behind the design choice immediately clicks into place. They feel natural and fluid inside the cockpit, and the aerial choreography is clearly the show’s great passion.

Our first glimpse of the sky is through a POV shot from the cockpit, and the camera swoops and dives in an attempt to impart the dizzying, stomach-butterfly feel of flying. Occasionally, things zoom out to admire planes pulling off coordinated formations; and all of this is tied just enough to the women in the cockpit to keep it from feeling like a disconnected effects extravaganza.

The highlight of the episode is easily hotshot Kylie’s chase with a mysterious dogfighter. While most of the air sequence lacks a true sense of tension because we have no idea who these pirates are or why they’re bad (in fact, we have more cause to dislike the women’s condescending allies), that changes once it’s down to these two planes.

There’s little dialogue, but the stakes are immediately clear, the stunts they’re pulling off feel tied to whatever long-standing rivalry is at play, and it reveals new dimensions of Kylie as a character. If that’s the kind of thing the show can do every week, then it is going to be one hell of a ride.

The episode closer looks better than its opener, maybe because we’ve had almost ten minutes of planes, but still enough of a good sign that the adjustment time for the series’ visual aesthetic will probably be quite short.

The only thing that raised a potential warning flag for me is the fact that the air squad the Kotobuki are helping out is specifically the Nazarene Air Squad—and if this is a series that’s going to be engaging with real-world politics rather than existing in a vaguely industrial fantasy world, that could get dicey real quick.

Otherwise? Charming cast, a dedication to avoiding a leering camera (not always easy, when there’s a lot of focus on manipulating that navigation stick in the cockpit), and smart direction could make this a gem of a scant season.

Also, their pilot is a dodo in a hat. I don’t know why, but it does feel very important to mention. I hope they hang out with the Revue Starlight giraffe.