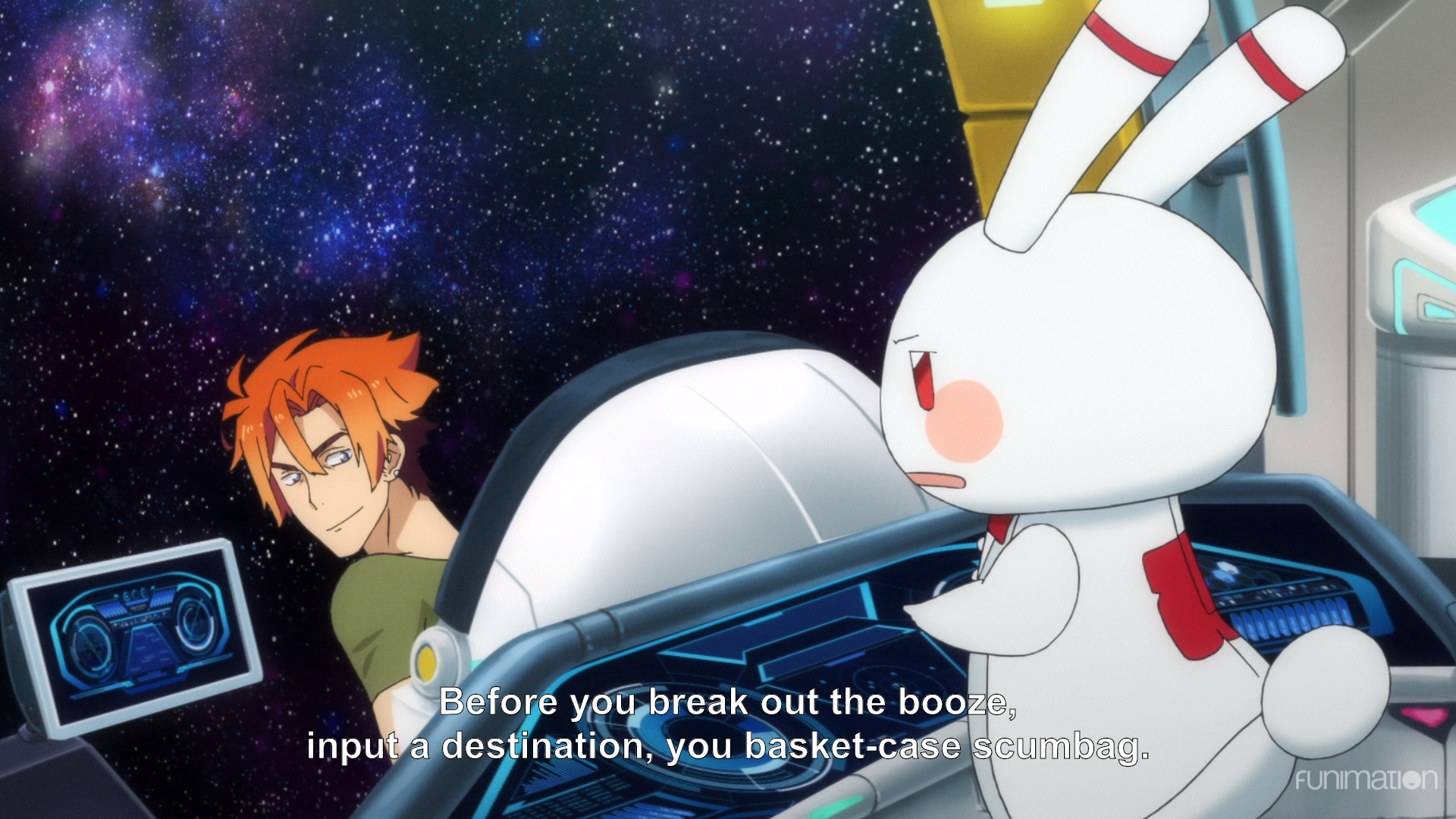 What’s it about? Robby’s life has been plagued with misfortune: every investment has fallen through, and now he’s up to his eyeballs in debt.  In a last-ditch attempt to find his fortune, he charts a course toward Isekandar, a planet where your dreams supposedly come true. Fortunately for him, the debt collector on his heels switches sides in hopes that Robby will show him a life full of the unexpected.

It’s not necessarily useful for a critic to work overmuch in comparisons, since you can’t assume a reader keeps up with All The Things and will immediately know what those references mean. But as I watched this premiere, I was struck with nothing so deeply as the thought: “this looks like they put Tiger & Bunny and Space Dandy in a blender. With some Samurai Flamenco on the side.”

Which is to say, in accessible terms, this is a brightly colored space comedy about a womanizing loser mashed up with an “opposites attract” co-star, and a lingering sense that the writers are throwing things at the wall to see what will stick. As much as I want to believe in the potential here, I’m not entirely sure it knows what it’s doing.

The setting is certainly bursting with creativity. Every scene is crowded with strange characters and eye-catching background details, almost to the point of being overwhelming. It’s a world in love with its own weirdness, but in a way that invites the viewer to come along for the ride rather than feeling lofty and smug. The character designs are unique, and I am an absolute sucker for fun stories starring adult characters.

Unfortunately, Robby kind of sucks. The show has enough characters drag him for his failings that it seems like he’ll grow out of the womanizing and chronic dickery, but in the meantime he’s more than a little grating.

Part of that is due to the fact that his shortcomings mean all of the women in this episode are essentially window-dressing. The larger issue, though, is that Robby’s bad luck is hard to sympathize with once it’s revealed he ran away from his rich family as a teenager. Not because they abused him or anything, they just…cramped his style. Or something. Also his “run-down” apartment looks like this.

That presumable safety net turns Robby from being a stressed-out adult scrabbling to keep body and soul together into an irresponsible manbaby who blames his bad decisions on bad fortune (it’s definitely implied he’s just dating women who’re conning him—and good for them, I was prepared to say by episode’s end). Whether the show ends up being any good will rest heavily on whether it understands this distinction.

The other part of the titular duo, Hatchi, is especially broadly sketched. A fastidious super-genius, he’s struck starry-eyed by Robby’s devil-may-care attitude and throws himself into Robby’s quest by episode’s end. He’s not bad, but he’s also a little wooden, his responses already completely predictable.

But then, perhaps that’s because the first half of the episode is a clunky extended lunch date in which the two met-by-happenstance leads explain their philosophies to one another. There’s a frantic quality to the writing here, as if the show is brandishing jazz hands at me with a rictus grin and sweat dripping down its face.

I’m coming down hard on what were essentially petty annoyances. (I’m also not wild about the fact that the mafia boss chasing Robby has an undercut, which seems to be anime’s new pet form of queercoding, if his copious lip-licking is any indicator.) But that’s because I can see the potential for a really excellent series buried in here.

The bleeding enthusiasm of the artists could lend itself well to extremely memorable episodic adventures, and if the writing actually forces its characters to deepen and mature then this could be a very satisfying adventure series. I’m at least willing to give it a few episodes to see if it can start finding itself.

Just….hopefully Funimation does something about those subtitles, ’cause they’re hurting my eyes against the extremely bright art.