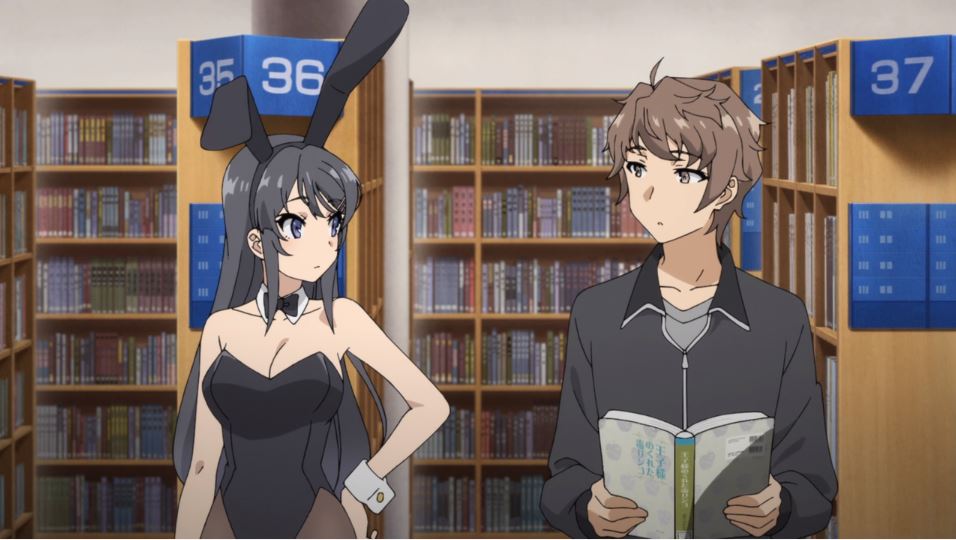 What’s it about? Sakuta is a withdrawn social outcast whose life changes when he sees his senpai, former child star Sakurajima Mai, walking through the library in a bunny costume—and no one can see her but him. Mai and Sakuta are both victims of “adolescence syndrome,” an urban legend that causes social perceptions of a person to manifest as physical effects.

Note: because this series is Very Smart and has Deep Thoughts that those who don’t have an extremely high IQ might not immediately grasp, this review will be presented with the aid of Subtext Vision.

There’s the germ of an interesting show in Bunny Girl Senpai—Mai’s complicated relationship with child stardom and the way young women are treated as disposable once they step out of the spotlight could work well with the terribly unsubtle but fitting supernatural element. Alas, there are two things in the way:

These two things are related. Sakuta is a member of the “nonplussed and snarky outsider who’s smarter than everyone and also misunderstood” school of protagonist: he one-ups a popular girl by asking if she’s on her period, threw his smartphone in the ocean because technology is bullshit, man (which later gives way to yet more exposition to show us he’s even more Deep and Sensitive than previously thought); and sits in class making comments about how shallow and fake his classmates are.

[Subtext: this deep thinker is only an outcast because people are too stupid to appreciate how much smarter than them he is; especially women, who are extra fake and will not sleep with him.]

That sneering attitude carries over to the plot mechanics as well. “Adolescence syndrome” (or puberty syndrome, the localization can’t quite decide) is in the same camp as those movies that “reinvent” supernatural monsters by insisting they’re actually caused by mundane, badly explained science. In a lengthy infodump, Sakuta notes that “anything weird” like body-swapping or psychic powers are just forms of the disease.

[Subtext: Magic or supernatural premises are for dummies. The only valid way to explore those exact same premises is to pretend there is a higher, smarter reason behind them that is very technical and clinical rather than artistic and thematic.]

This also means that the emotions of the characters living through this experience can be displaced into dry technobabble, adding another layer between the audience and the potentially interesting female characters.

Which, unfortunately, is the last and most painful part of the premiere. While plenty of shows have succeeded in spite of having terrible protagonists, the women of Bunny Girl Senpai are only allowed to express their pain as it relates to Sakuta. Mai experiences the anxiety of being ignored by more and more people mostly offscreen, and ends the episode waiting outside Sakuta’s apartment, with the implication that she’ll have to rely on him to bring her food (why she wouldn’t just steal something to eat, who knows).

Sakuta’s younger sister Kaede is also a victim of Adolescence Syndrome, withdrawn to the point of being a shut-in after intense bullying—this is phrased with nauseating cutesyness as “she loves the house so much she doesn’t even go to school anymore.” She avoids the internet in order to keep her panic attacks “syndrome” manageable and can barely communicate with strangers. And oh yes, of course she climbs in his bed at night. Did you even need to ask.

[Subtext: While these young women are suffering serious trauma and mental illness, what’s important is that they are ultimately required to rely on the protagonist for their every emotional and physical need. Women solving things on their own without needing a man’s input are scary.]

Again, there are compelling seeds here. Were the series actually about Kaede and the fact that bullying and anxiety have caused her to revert to typical infantilized imouto behavior—which she then needs to heal and overcome—there might be something to talk about there. But the show is too busy patting itself on the back, throwing in a one-off line about how only weirdos would get excited by their sister after it’s already played out the “cute sister with no personal boundaries” fantasy in full.

There is the smallest chance that Bunny Girl Senpai could turn itself around, focusing in earnest on its female characters and treating their struggles with gravitas and humanity. Lacking much faith in that likelihood, however, I’m gonna go ahead and jump off here.

[Subtext: This is based on a light novel.]