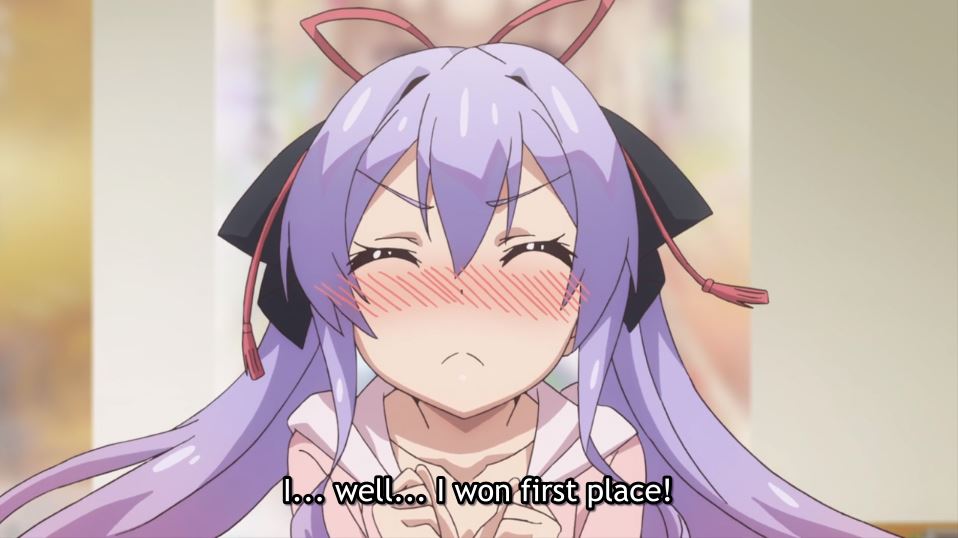 What’s it about? Yu is an aspiring light novel author, but he can’t seem to make it out of the slush pile. His sister Suzuka, on the other hand, just netted the newcomer grand prize for a novel about a little sister in love with her older brother. Worried about breaking school rules against part-time jobs and their parents’ disapproval, Suzuka asks Yu to pose as the book’s author in public.

I’ve watched quite a few premieres focusing on protagonists who want to bone their siblings for this site, and—as a person who actually has older siblings and therefore finds the whole concept extremely gross—I’d be lying if I said it wasn’t kind of fun to pull their fetid gut-strings across the proverbial floor.

But honestly? Writing those words would take more work than the amount on display in this premiere.

Shows like GOBLIN SLAYER and UzaMaid! clearly had talent and resources wasted on them, but My Sister, My Writer doesn’t even look nice. The character designs have that unfortunate late-2000s look that combines chubby cheeks with sharp chin points, so that it looks like some swollen flesh droplet is about to fall off their jaws. Eyes manage to be symmetrical to one another but float aimlessly on faces that lack proportion. Background objects change size and shape from shot to shot. Its hideousness is almost an accomplishment in-and-of itself.

The writing actually tips its hand fairly early: Yu gets a note along with his rejection (is this more common in Japan? because let me tell you, U.S. writers who get rejected from the slush pile are getting form letters and nothing else 85% of the time, especially from a contest) that he should try to write a little sister character, because they’re very popular.

In that instant I had a very clear picture of the writers on this anime: grinding away at cigarettes or caffeine supplements, their beloved manuscripts gathering dust in their drawers as they march to work on a job that will keep a roof over their heads. Which is fine—not every job a writer takes can be their passion project. But I’m on the hook to watch the finished project, and my time feels more wasted than usual.

Yu meets a number of women over the course of the episode, and each time stops just short of turning to the camera and saying “Wow, this is just like a light novel, huh” (he says it to his definitely-of-age coworker instead). The editor for Suzuka’s manuscript tells Yu he’s welcome to grope her anytime he wants if it improves his work. Yu is alarmingly willing to picture his sister naked and asking for sex at the slightest prompting, because writers of siscon shows are all invariably (I hope) only children. And every woman is introduced either in that slightly dutch-angle visual novel shot or from the assets up.

Every beat is telegraphed a year away (gotta get those shots of bare feet, because siscon is about vulnerability fetish!); every line is a recycled cliché. And despite having at least a modicum of animation resources, it still looks worse in motion than the considerably more limited but charming Skull-Face Bookseller Honda-san.

The fact that Suzuka ecstatically announces her plans at episode’s end to become her blood-related brother’s girlfriend couldn’t even stir more than a halfhearted “kay” from me, so beaten down was I but the drudge of the past twenty-minutes-cum-year.

This anime is boring. It is too boring even for fans of sisterfucking. And that is the most damning thing I can say about it.