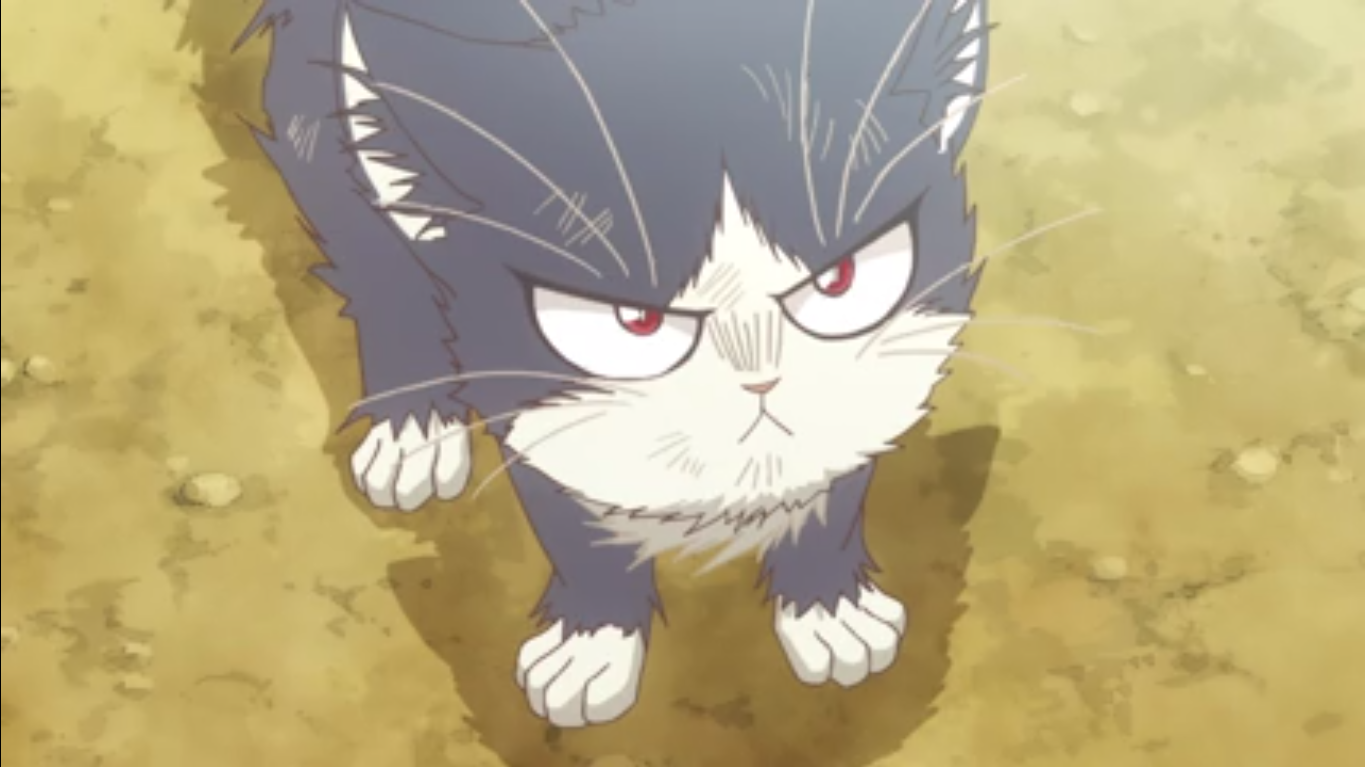 What’s it about? Subaru Mikazuki has been alone since his parents died when he was a teenager. Now a popular mystery novelist, he has little interest in the world outside of books and has become notorious at his publishing company for being sour and abrasive. When he encounters a cat at his parents’ grave, he gets the idea for a mystery novel about a feline murderer and takes the kitty home.

Of the two primary characters of My Roommate is a Cat, one is likable. The other is not. Can you guess which is which?

If you guessed the cat is not the likable one… I don’t know what planet you’re from. In pet stories, the animals are always eminently lovable. They have fun internal narration and quirks, are inscrutable from the perspective of their baffled owners, and are always totally logical and consistent. It helps that they’re cute and fuzzy and, if you’re watching this kind of show, you’re probably a fan of that, too.

No, it’s Subaru who is insufferable. He’s rude, unpleasant, and hates being around people. He’s borderline cruel to his editor, dismissing his attempts at being helpful as “distractions,” and doesn’t consider life experience to be necessary for being a good writer. This is rarely the case—most of the time, lived experience is one of the most important tools in a writer’s toolbox. So, when he brings the cat home to serve as inspiration for his new novel, he’s completely confused by this creature that doesn’t act according to any kind of logic he understands.

The general idea of the show isn’t hard to guess: the cat, still nameless, will soften up Subaru and help him connect with the people around him. Through the pet-owner connection and their own fundamental felinity, they’ll teach him what it means to be human. While the particulars may be different, these things tend to always follow the same general course.

I say that but, to be honest, I’m a total sucker for these kinds of stories. I sniffled at the trailer for A Dog’s Journey, fully aware that all dog movies follow one of three plots and the CG cougar looked terrible. I grew up with a house full of pets but live in an apartment building that doesn’t allow any, so I miss the warm fuzzies, both literal and metaphorical, that an animal companion can bring. When the kitty tries to repay Subaru by leaving kibble for him, I was genuinely touched.

Then the episode switches perspective and, instead of watching the cat from Subaru’s perspective, we watch Subaru from the cat’s perspective. It has the usual cuteness of animals trying to map their behavior onto a human, much like humans anthropomorphize animals. The cat’s past—they watched their littermate starve to death as a stray—adds an extra layer of poignancy to their concern for their new owner.

The premiere for My Roommate is a Cat is, in the end, a love letter to the bond between pets and their owners, and the power of interspecies friendships. It’s a little sentimental, a touch schmaltzy, but absolutely sweet and sincere. If you like pet stories even a little bit, this one is for you.